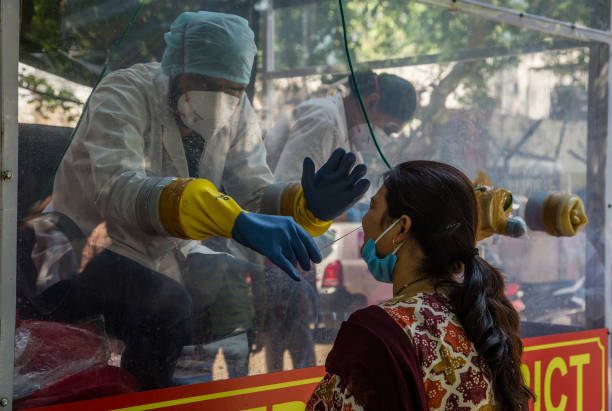 Even as a deadly second wave of Covid-19 ravages the state, doctors are now reporting an upsurge involving an unusual infection known as the’ black fungus’ or ‘mucormycosis’ among Covid-19 patients. According to the Bagalkot administration in Karnataka, three cases of black fungus have been discovered in patients suffering from COVID-19.

BS Yediyurappa, the Chief Minister of Karnataka, has announced that an expert committee will be created to develop a strategy for treating those who have been infected from the disease. Furthermore, on Monday, the Karnataka government decided to conduct a trial at Bowring Hospital in Bengaluru to treat “black fungus” or mucormycosis in Covid-recovered or recovering patients.

Mucormycosis is an infectious disease caused by the fungus mucormycetes. These fungi are abundant in our environment, especially in soil. People contract the disease by inhaling fungal spores that float about in the air as these spores get lodged in the sinuses and nasal passages, causing inflammation.

So let’s take a detailed look at understanding mucormycosis

So what is mucormycosis?

As mentioned earlier, many people suffering from COVID-19 have recently been diagnosed with black fungus disease, also known as mucormycosis. Basically, the fungus spreads through the sinuses and into the intraorbital and intracranial areas.

Medical health professionals have termed these to be opportunistic infections. When the immune system is weakened by another infection, though, normally innocuous fungi take advantage of the situation and infiltrate human tissues.

Despite this, fungi seldom cause life-threatening infections, unlike their pathogenic bacterial counterparts. A few fungi, such as the Candida yeast, may sometimes initiate a severe infection. Candida will live on healthy people’s skin as well as inside their mouths, throats, without causing any complications. It may induce oral thrush, skin rash, and genital infections if the host’s body has been compromised by another disease or medications.

But in this case, it is a little different, Mucor produces spores, which are small spherical dark-hued structures that spread through the air, like most fungi. When these spores land on moist surfaces, such as soil or plant material, they germinate and develop mycelia or thread-like structures. Mycelia expand by branching out and consuming sugars in their environment.

However, in tropical areas, spore numbers are usually greater in the summer than they are during the monsoons.

Why is it appearing now in the country?

We have seen health care systems are under intense pressure. These crowded and cramped environments in the country are giving it more chance to spread. The morbidity rate is so high and the statistics have revealed that in 50-80% of cases, patients have died as the disease progress has been unchecked.

As per the reports, In India almost 1,000-5,000 spores per cubic meter are found outside, the count inside most homes is just 100-250. More than 90% of the gross spore volume in the air is accounted for by five to ten animals.

Doctors state that indiscriminate use of steroids to treat COVID-19 is the likely cause, as steroids reduce inflammation in the lungs. But they also reduce immunity and push up blood sugar levels in both diabetics and non-diabetic Covid-19 patients.

Health experts have reported that the majority of mucormycosis infections have been seen in COVID-19 patients with diabetes or those with underlying and high blood sugar.

Another study state that people who have had organ transplants rely on immunosuppressive medications to protect their bodies from destroying the new organs, but they are often vulnerable to infection in this condition. Henceforth even those patients are affected by this condition.

Even the air pollution and excessive dust in cities such as Mumbai, Delhi, Bengaluru, Chennai make it easier for the fungi to thrive.

What are the possible symptoms?

• Pain and redness around the eyes and nose

• Black patches on the skin around the nose

• Pain on one side of the face, in the sinuses and teeth

So then how is this condition diagnosed?

Anti-fungal medications, such as liposomal amphotericin B injections, are given to patients for at least 10 days to several weeks after diagnosis. However, these medications have the ability to cause serious side effects, including kidney damage.

Surgical intervention is often needed. Doctors use an endoscope to look through the nose and clear any diseased tissue for less serious cases.

But here is the catch, antifungal medicine has a very limited supply due to rising demand, resulting in a back market for medications that were still prohibitively costly for most people. Finding hospitals where mucormycosis patients can receive surgery and post-operative treatment in an overcrowded healthcare system can be a logistical nightmare.

To also note the fact that, many of the patients are arriving later, when they are already losing vision, and doctors will no choice but remove the eye surgically to prevent the virus from spreading to the brain. Most patients have lost vision in both eyes, but these are rare cases.

The treatment involves injections for 21 days and also the basic cost of the injections is around ₹9,000 per day. Most people will find it impossible to afford it.

Furthermore, Indian Council of Medical Research (ICMR) has advised doctors to look for early signs such as sinus pressure or nasal blockage on one side of the face, one-sided headache, swelling or numbness, toothache, and loosening of teeth in the patients.

ICMR has also stated that people should maintain personal hygiene and they have advised medical practitioners to stop using immune-suppressing medications like steroids.

Experts state that, previously unusual forms of mucormycosis were found in patients with severe diabetes but now, all of the cases are linked to COVID-19.

But these unforeseen outbreaks have presented new problems for patients who have already been physically, emotionally, and financially drained by a COVID-19 infection.