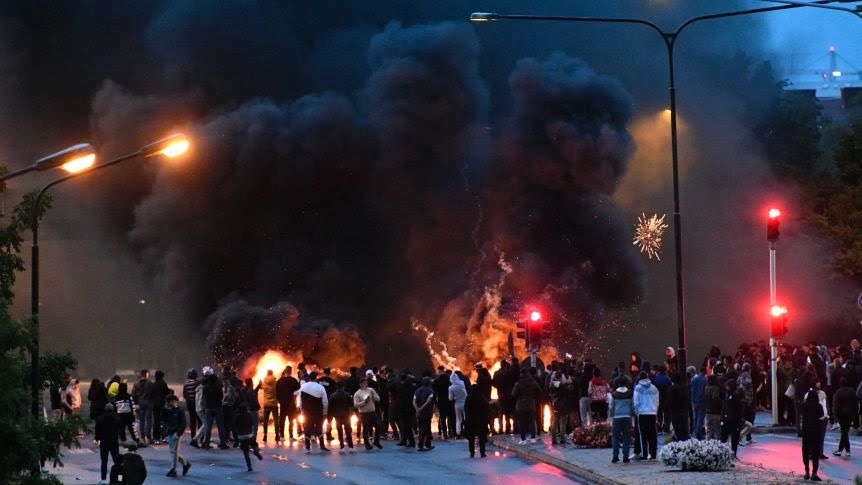 On Friday, violent #riots broke out in the city of #Malmo, in #Sweden. Where a group of around 300 people had gathered to protest anti #Islam activities. Protesters threw stones at police and burned tyres on the streets of Malmo with violence escalating as the evening progressed. These protests broke out because a copy of the Islamic Holy book #Quran was burned by the far right Danish party members #Stram Kurs. The party leader, #RasmusPaludan was denied permission to hold a meeting in the city of #Malmo to discuss the “Islamization of the Nordic countries”. He was going to be joined by #Dan Park, a #swedish artist who was previously convicted for inciting hate towards minority communities.

#RasmusPaludan is a far right politician in Sweden. He was known for making provocative anti- Muslim YouTube videos where he would burn the #Quran, wrapped in bacon and justify it as his right to free speech. Paludan was close to getting into parliament in the last #Danishelections with a policy that promised to deport more than 300,000 Muslims from #Denmark and ban #Islam in Sweden.

Paludan has been banned from entering #Sweden for the next two years. He put up a scathing message on Facebook saying “sent back and banned from Sweden for two years. However, rapists and murderers are always welcome” #Paludan was also convicted on charges of racism and for posting anti-Islam videos on social media channels, as a result of which he was sentenced to three months in jail and was disbarred from practicing law. In 2019, he was sentenced to 14 days of jail for delivering a racist speech. A few months ago, he was found guilty on 14 counts including racism, defamation and hazardous driving and served one month in jail along with two months of a suspended sentence.

Indian twitter has seen a surge of tweets making a connection between Delhi and Bangalore riots. “Same pattern was seen in #DelhiRiots #Bangaloreriots. “They first offend you and when you retort they get super offended, burn down and kill everyone who hasn’t offended anyone,” said actor Kangana Ranaut. While “Similar kind of violence was seen in #BangaloreRiots and #DelhiRiots but in Sweden the mob was even chanting Allahu Akbar! As usual #SICKULARS have gone underground to prove terror has no religion!” tweeted #BJP leader Shobha Karandlaje.

Many on twitter have also pointed out that although they condemn this incident, these aren’t the only violent riots that have taken place recently and that more pressing issues in India deserve attention and focus.