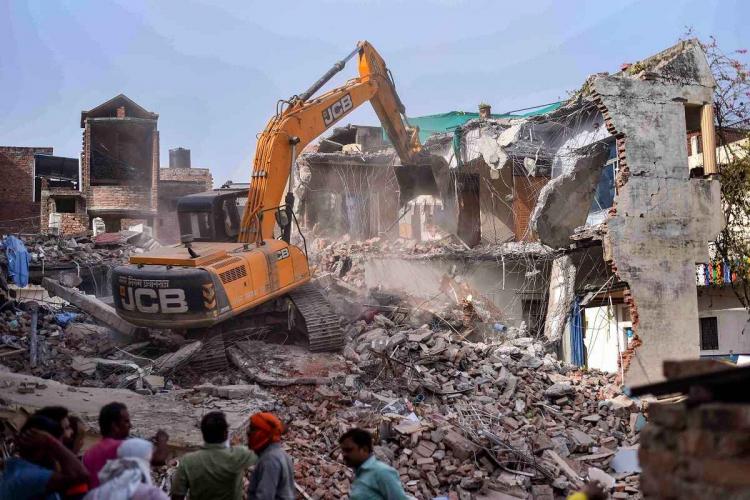 On Sunday, the Uttar Pradesh administration demolished the house of Mohammad Javed, leader of the Welfare Party of India and a businessman. The incident took place just after a day’s notice to vacate the house. The demolition happened in the presence of senior police officials.

The district police had arrested Javed on Saturday, blaming him for Friday’s violence in Prayagraj. His daughter Afreen Fatima is a JNU student leader and anti-CAA activist. Earlier, she had complained that the Allahbad police had arrested her family on Friday night without any notice or warrant.

In UP's Prayagraj, demolition of Javed Mohammad's residence begins. As per police, he is one of the main conspirators of violence in the city on June 10. Javed is associated with Welfare pary of India and was arrested along with wife and one of their daughters. pic.twitter.com/1aE1HyP7on

The police alleged that Javed called for a “bandh”, asking people to reach the spot of protests through social media.
SSP Ajay Kumar said that Javed had told during questioning that his daughter Afreen often gives him suggestions. However, the Police had not found any preliminary evidence against the latter. When asked if she would be questioned, the Police said, “If strong evidence is found, action will be taken.”

Sunday’s action in Prayagraj comes after bulldozing of “illegal construction” on the residences in Saharanpur of two accused involved in Friday’s violence by the Saharanpur district administration. The Kanpur Development Authority also demolished a commercial building, which the district police alleged belonged to a close relative of the prime accused in the June 3 violence.

Sumaya, afreen sister recounts the police interrogation she and her mother was subjected to for 30 hours in detention. Today the Yogi govt demolished their home in Allahabad.

However, Javed’s younger daughter Sumaiyya Fatima said that the allegations were made up to cover the truth, and her family was dragged into a false controversy. She added that the police found nothing other than their mark sheets and educational materials.

Advocate K K Roy, who is representing Javed’s family, told “The house demolished on Sunday is in the name of Parveen Fatima, wife of Mohammad Javed; the notice on Saturday has been served to Javed Mohammad. As per Muslim law, the wife’s property does not belong to the husband.”

“No notice was served to the family on May 10, as is being claimed by the officials. The notices have been prepared with old dates overnight by officials… And the probe can go on, but demolition is a draconian act which is against our country’s rules and regulations,” he added.