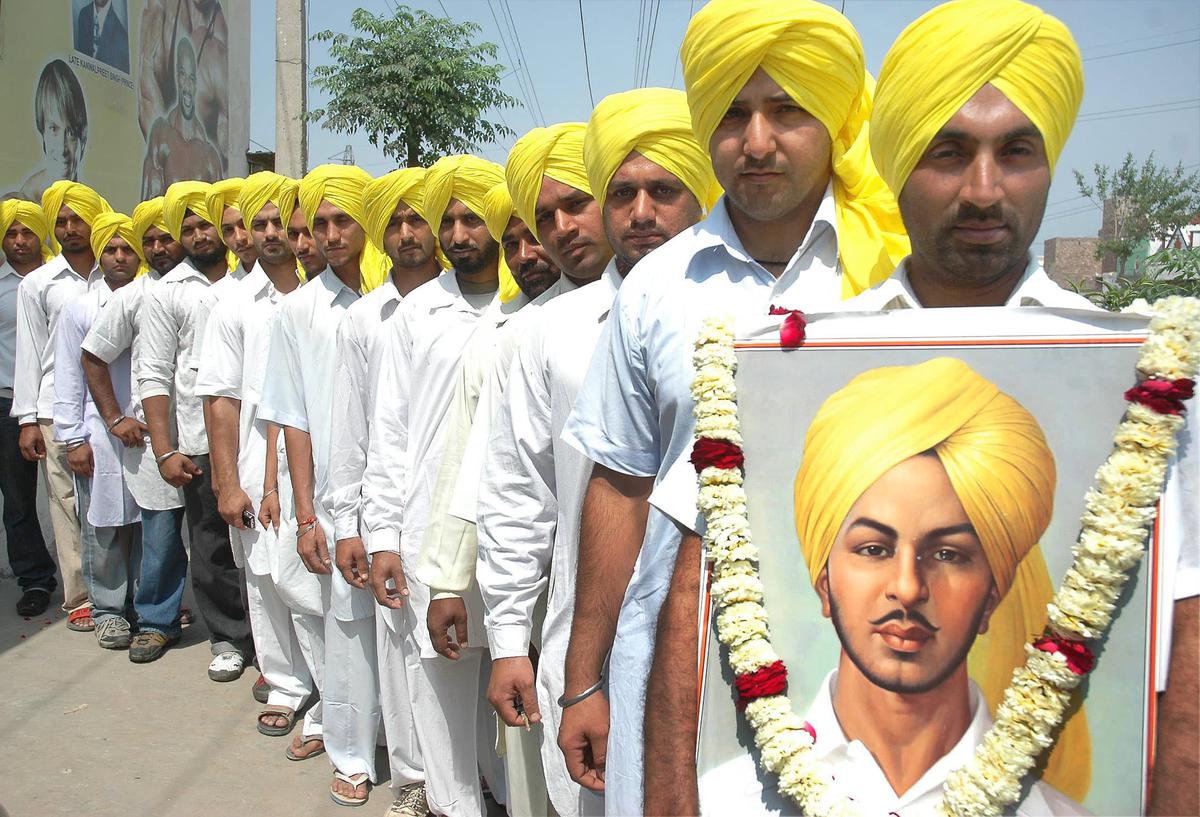 The Aam Aadmi Party (AAP) has prominently displayed a picture of freedom fighter Bhagat Singh clad in a yellow turban in numerous offices. Punjab’s new chief minister, Bhagwant Mann, has stated that photographs of Dalit icon B.R. Ambedkar and Bhagat Singh would be extensively exhibited in State government buildings. According to historians, however, the revolutionary, who was just 23 years old when he was hung on March 23, 1931, never wore a yellow turban.

According to historian Chaman Lal, only four known images of Bhagat Singh exist: as a child and subsequently as a student at Lahore’s National College with a white turban, in police prison in Lahore with open hair sitting on a cot, and a fourth with trimmed hair and cap.

Speaking to PTI, Mr. Lal, the author of several books on Bhagat Singh, said “There are only four real photographs of Bhagat Singh. Instead of putting one of those at the government offices in Punjab, the administration chose a picture based on a painting by artist Amar Singh in 1975, and commissioned by Giani Zail Singh, then chief minister of Punjab.”

“There is no ban on paintings. You can use it at homes or public meetings, but not at government offices or official purposes. Also, when you don’t use it for other historical figures, including Mahatma Gandhi, Subas Chandra Bose, Sardar Patel, then why use painting-based photos for Bhagat Singh?” he added.

He claimed that until the 1970s, the most popular image of Singh was of him wearing a hat. It was shot five days before he and B K Dutt detonated bombs in Delhi’s Central Assembly, today known as Parliament House.

Mr. Lal also recalled how the Shiromani Akali Dal administration changed a statue of the independence warrior wearing a hat that was erected in 1974 by then-chief minister Zail Singh in Punjab’s Nawanshahr (now Shaheed Bhagat Singh Nagar) district. He was shown in a turban in the new statue.

Historian S. Irfan Habib, slammed the Punjab Chief Minister and other political parties for attempting to portray Singh as a Sikh icon using “false photographs.” “Don’t attribute your yellow turban to Bhagat Singh is what we are saying. He has nothing to do with the colour yellow. It was never his choice, he has never written anything on it, and nor do we have any photograph of him wearing one,” Mr. Habib said.

Singh was born into a Sikh household that also has Arya Samaj links. He later declared himself an atheist, separating himself from any religion.