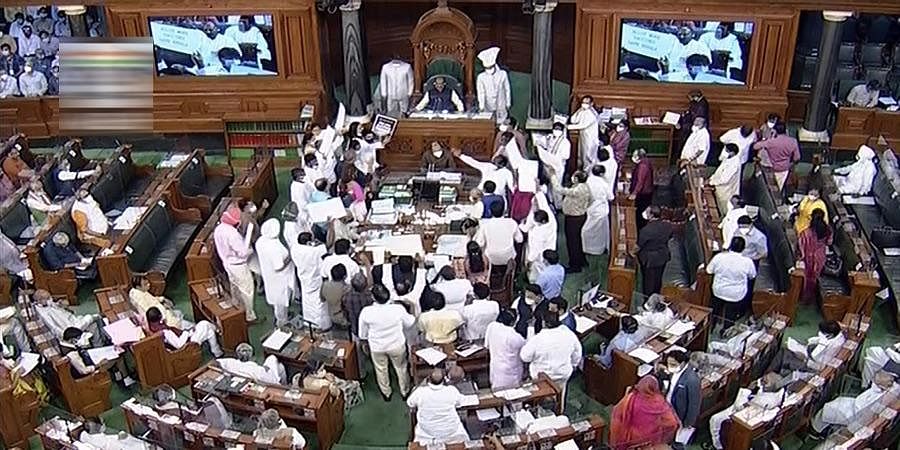 The Rajya Sabha passed a Bill to link electoral roll data with the Aadhaar ecosystem by voice voting on Tuesday, despite the Opposition’s walkout.

The Election Laws (Amendment) Bill, 2021, seeks to allow electoral registration officers to seek Aadhaar number of people who want to register as voters “for the purpose of establishing the identity”.

TMC member Derek O’Brien highlighted regulations for a vote division, while deputy chairman Harivansh asked members to return to their seats so the division could take place. Members of the opposition, on the other hand, continued to shout slogans in the well. O’Brien staged a walkout by tossing the rule book on the table where officials sit.

Members of the Congress, TMC, Left parties, DMK, and NCP also protested in the House.

Mallikarjun Kharge, the Leader of the Opposition in the Rajya Sabha, slammed the Centre, claiming that the Election Laws 2021 Amendment Bill was approved without “discussion or debate.” It was a “mockery of democracy,” he said.

The government-endorsed the law, claiming that it would address the “serious problem” of multiple enrolling of the same individual in different areas and would greatly assist in “cleaning” the voter list.

Various election reforms that have been proposed for a long time are included in the Bill. According to official sources, the Election Commission issued a statement in 2018 following a meeting of all recognised national and regional parties on different election changes.

The EC had previously stated that “political parties urged the commission to link Aadhaar numbers with electors’ details for better electoral roll management.”

The linking of Aadhaar to electoral registers will address “one of the biggest difficulties” in electoral database administration, particularly multiple enrolments of the same individual in various areas.

This might be due to voters often changing residences and enrolling in a new location without cancelling their prior enrollment.

“This will help in cleaning the electoral roll to a great extent and facilitate voter registration in the location at which they are ‘ordinarily resident’.” according to the government.

“I don’t know why the government was in such a hurry to pass the Election Laws (Amendment) Bill. It should have been sent to a standing committee. There is still no data protection legislation in place. This may damage people’s voting rights,” Chowdhury remarked on Monday.

Congress MP Shashi Tharoor too opposed the Bill saying Aadhaar was only meant to be a proof of residence, but not a proof of citizenship. He said if Aadhaar were to be asked for voting, “all you are getting is a document that reflects residence, not citizenship. You’re potentially giving the vote to non-citizens”.

The legislation, according to law minister Kiren Rijiju, would assist in eradicating fake and illegitimate voting in the country and make the election process more credible.

The minister dismissed the opposition’s concerns about the Bill as “baseless,” saying the opposition was “misinterpreting” the Supreme Court’s personal liberty decision.

“There is no basis for your opposition to the Bill. The Election Commission and the government have held many meetings and the EC’s biggest concern is that the same person has (his or her) name in multiple electoral rolls and there is no other system to check this,” Rijiju made a point of saying.

“In our democracy, the electoral process should be clean and that can happen only if the electoral rolls are clean. This Bill will be opposed only by those who take advantage of fake voting. There is no basis for rejecting this Bill otherwise,” he stated.