Pets have been always close to human hearts from time immemorial.

The dog even holds the title of man’s best friend which indicates our attachment to dogs.

This attachment has been portrayed in various movies in India as well as abroad.

One such recently released movie is ‘Charlie 777’. Charlie 777 a snippet from the movie
Credits:- Times Of India

But as humans, we get emotionally connected to characters we see on the screen which holds for the animal characters too.

This emotional attachment leads us to want to own a dog which looks similar.

Such a thing has happened with the movie “Charlie 777”.

An alleged increase in demand for Labradors was reported after the release of the Kannada movie Charlie 777.

In this movie, the dog played a titular character.

This has also led to breeders becoming very active in breeding labradors (the species of dog portrayed in the movie).

In the wake of this, People for the Ethical Treatment of Animals (PETA) India has urged fans not to buy dogs from breeders, but to only adopt them.

PETA also referred to the film’s plot where 777 Charlie escapes from a cruel dog breeder before it ends up on the street.

But this is not happening for the first time many such incidents have happened in the past and around the world.

Let us look at some of such incidents:-

101 Dalmatians lead to 101 people wanting it

The famous Disney cartoon movie 101 Dalmatian has had huge success in the states.

The movie showed the cute and cuddly side of the dog breed.

This attracted many to this breed of dog.

But this portrayal is not the full portrayal The Dalmatian is described by Modern Dog magazine as an animal with high “exercise demands” and a “willful personality.” Due to these characteristics of the dog, they require some amount of activity to stay healthy.

Thus many pet owners who in their busy life couldn’t give their dogs proper exercise were Abel to see a side of the dog not portrayed in the movie.

A dog who is a restless, bored, irritable, and unpredictable pet.

This led to an increase in the abandonment of these dogs.

Even though it is not the job of the Disney corporation to educate the public about animal adoption, they added a statement at the end of their 102 Dalmatians sequel nonetheless, which talked about doing appropriate research on a species before buying it as a pet.

They also partnered with the Dalmatian Club of America to develop an extensive educational campaign focusing on pet ownership responsibility.

Huskies had to pay for the iron throne.

There is a character of Direwolf in the enormously popular series named the “Games of Throne”.

But here instead of getting attached to the animal people began to get repulsive to the dog.

Even though the dog is fictitious it has an uncanny resemblance to the Siberian Husky.

Thus many Huskies began to be abandoned or given to shelter homes just because of their resemblance.

People started to Find Nemo after the movie.

It is not always dogs which have to bear this treatment due to movies.

A similar fate awaited the clown fish which was popularised by Finding Nemo’s lead characters, Marlin and Nemo. 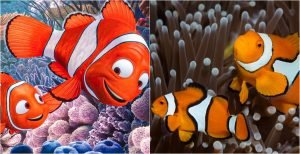 A Snippet from the movie FInding Nemo.
Credits:-POP

The entire movie’s plot is about fish wanting to stay in the ocean.

This did not deter people from buying it clown fish sales increased by 40 per cent after this movie.

This led to wild clownfish being put under the endangered species list.

In parts of Thailand, Sri Lanka, and the Philippine Clownfish was declared locally extinct.

While many died in their new homes in captivity as they are very sensitive to changes and require a strict habitat factor to stay alive.

In the film, G-force the Guinea pigs were an elite crime-fighting force. 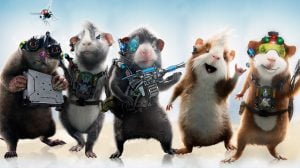 Many organisations like Orange County Cavy Haven, took the lead in protecting another species from being impulse purchases of uninformed buyers.

They also had to run various awareness programmes to stop people from re-creating action scenes shown in the movie with their Guinea pigs, posters were released saying that real Guinea pigs can’t master martial arts or perform stunts.