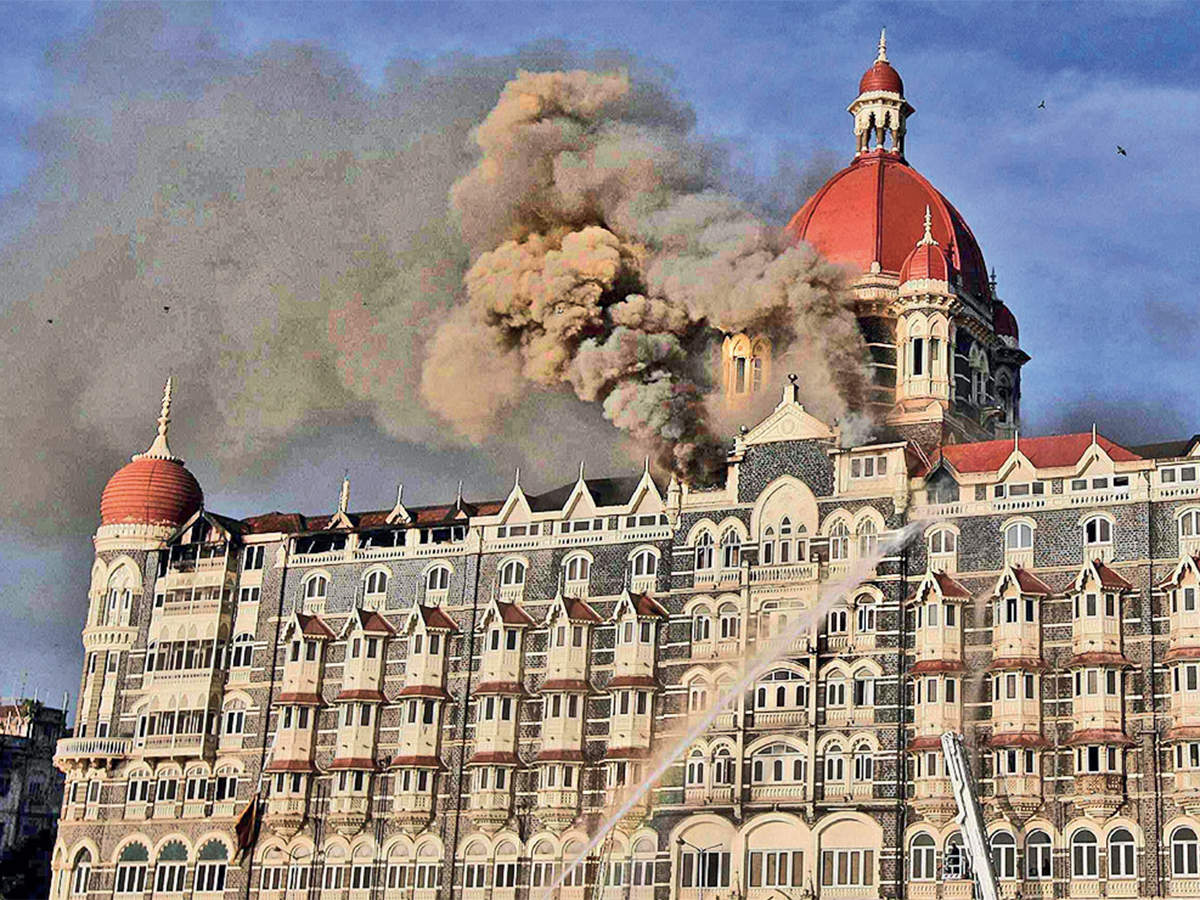 On November 26, 2008, ten members of the Pakistan-based terrorist outfit, Lashkar-e-Taiba carried out a series of terrorist attacks including 12 coordinated shooting and bombing attacks lasting four days across Mumbai. The Taj Mahal Palace hotel, the Trident hotel, the Nariman House, the Metro Cinema, and the Chhatrapati Shivaji Terminus were among the targets of these attacks, which lasted almost 60 hours.

As many as 166 people were killed, including 18 security personnel, and countless others were left injured. The security forces killed nine of the 10 terrorists. Hemant Karkare, the then-head of the Anti-Terrorism Squad (ATS), Army Major Sandeep Unnikrishnan, Mumbai’s Additional Police Commissioner Ashok Kamte, Senior Police Inspector Vijay Salaskar, and Assistant Sub-Inspector (ASI) Tukaram Omble were among those who lost their lives in the pursuit of the terrorists.

On August 29, 2012, the Supreme Court handed down its decision in Md. Ajmal Md. Amir Kasab vs. the State of Maharashtra, which dedicated an entire section and many pages to the media’s behaviour and how it jeopardised operations during the siege.

Barely a day after the siege of Mumbai began, Claudine Beaumont of the Daily Telegraph wrote that Twitter and Flickr users not only broke the news first but also continued to offer instant, firsthand descriptions of the developing catastrophe. In addition, numerous hostages communicated with their relatives via phone calls, emails, and text messages when they were permitted.

#Mumbai was trending on Twitter, and this new trend of hashtags made it simpler for family and journalists to get real-time updates from the streets, train station, and inside the besieged buildings and hotels. Each site was monitored by news cameras 24 hours a day, seven days a week. Intercepted phone calls between terrorists and their handlers revealed that they were also watching the news, telling attackers of details acquired from the media and encouraging them to keep going for the ‘glory’ of “martyrdom”.

There are countless instances of how the media’s obsessive coverage repeatedly endangered the hostages by inadvertently providing information to the terrorists by publicly broadcasting live news. Terrorists learned that guests were sheltering in the Taj’s Chambers on the night of the 26th when their Pakistani controllers informed them that the news had been aired on television. The TV networks appear to have uncovered this while interviewing a politician who was at the Chambers over the phone.

A lady who was trapped at the Trident was featured in a Discovery Channel documentary on the survivors of this tragedy. She contacted her daughter in Canada, saying she was safe from on the 19th floor since the terrorists were down below. Her daughter texted back within minutes. A live feed from an Indian station was shown on Canadian television. The cameraman was focusing on a lighted window on the 19th floor as the reporter revealed that guests had sought protection there.

Since all TV stations broadcast live footage of commandos being lowered onto the roof of Nariman House, the National Security Guard thinks it lost any advantage of surprise. An NSG havaldar was killed, and the mission was not nearly as effective as it may have been otherwise. False news was also constantly given to the media, which posed another challenge for anybody trying to carry out the operation. While the operation was underway and NSG commandos were risking their lives, the Navy’s commandos (who had been involved in the operation briefly before the NSG arrived but did not appear to have engaged with the terrorists) held a live television press conference, giving details (most of which were incorrect) about what was going on inside the Taj.

This isn’t the first time that television stations have been accused of jeopardising security operations. After TV crews recorded police preparing to raid the Olympic village when terrorists kidnapped Israeli sportsmen during the 1972 Olympic games, German security forces were compelled to abort the rescue operation.

As journalist Vir Sanghvi wrote, “How much of a genius do you have to be to recognise that somebody needs to talk to TV channels and prevent them from revealing such details or warning them that they were contributing to the deaths of innocent people?”

The Ministry of Information and Broadcasting sent notices to two Hindi news networks, Aaj Tak and India TV, shortly after the attacks. When questioned if the networks in issue had broken any Standard Operating Procedure (SOP) for the media in crisis circumstances, government sources conceded they had no explanation. There were no rules established, and there were no deliberations about how to effectively construct a communications plan in such circumstances. The lack of a basic procedure was glaringly obvious while examining the failures post the siege. Unfortunately, it required an incident like 26/11 for the government and the media to develop new coverage standards.

Governments in crisis or warlike situations frequently restrict access and limit information. Such instances are abundant on a global scale – such as the coverage of the 9/11 aftermath and the 7/7 London attacks. The media adhered to laws regarding access to and broadcast of images that may incite tensions. They broadcast information that was released by the police, intelligence, and administrative briefings regularly through briefings. Indian journalists also witnessed this during the Kargil War, when the army, air force, and Ministry of External Affairs held regular periodic briefings to supply the media with reliable information.

“It is a failure of self-regulation which by its nature is left up to individuals’ consciences,” said Rajdeep Sardesai, editor-in-chief of CNN-IBN, an Indian news channel. “We had set a code of conduct up in October but then came Mumbai. The challenge is whether (the new protocol’s) intent can be translated into implementation.”

In a 2012 interview with Newslaundry, journalist Barkha Dutt acknowledged that television networks were responsible for endangering the lives of citizens and security forces by not exercising restraint whilst reporting.

Barkha acknowledges that, in retrospect, journalists may have made mistakes during the Mumbai siege. She does, however, immediately add that after they ‘realised,’ they began deferring images of live news of the assaults by 15 minutes starting on the second day. She adds to her defence by claiming that the media was unaware that the terrorists’ handlers were watching news stations.

“In one instance she asks a husband about his wife being stuck or held as a hostage. The poor guy adds in the end about where she was last hiding. Aired! My dear friends with AK-47s, our national news is helping you. Go get those still in. And be sure to thank NDTV for not censoring this bit of information.

In another instance, a General sort of suggests that there were no hostages in Oberoi Trident. (Clever.) Then, our heroine of revelations calls the head of Oberoi, and the idiot confirms a possibility of 100 or more people still in the building. Hello! Guys with guns, you’ve got more goats to slay. But before you do, you’ve got to love NDTV and more precisely Ms Dutt. She’s your official intelligence from Ground zero.

You do not need to be a journalist to understand the basic premise of ethics, which starts with protecting victims first; and that is done by avoiding key information from being aired publicly—such as but not limited to revealing the number of possible people still in, the hideouts of hostages and people stuck in buildings.”

NDTV ended up sending him a legal notice due to which he was forced to take down his post, but there was an outpour of similar criticisms being levelled against Barkha and several other journalists for engaging in similar activities.

With several national laws spanning multiple platforms and no room for self-regulation, Indian agencies are at a loss when it comes to dealing with this dilemma. When attacks happen, their immediate reaction is to turn off wifi access. This response, like previous ones, is far from ideal. And the path forward points to the same lessons learned in the past: the necessity for interaction and discussion among all stakeholders — governments, mass media, and now social media organisations — in order to develop nuanced solutions in a multidimensional media landscape. After all, the media’s significance in moulding public sentiment in a democracy cannot be ignored or undervalued.

With this perspective, when we examine the government’s response to supposed unethical journalism in which sensitive material is aired, we notice that instead of striving to implement guidelines and structural changes in media legislation, they immediately resort to a total shutdown.

The BJP-led government issued warnings to three television stations in 2015 for their coverage of the hanging of Yakub Memon. In another instance, the government cited national security as a rationale to try to shut down NDTV India for a day after it covered the attacks on the Indian Air Force base in Pathankot in January 2016, alleging that ‘sensitive information’ regarding the air base’s location was broadcast.

However, this does not address the root of the problem: the lack of a centralised authority to oversee media standards and avoid future catastrophes. Without this central authority, the government would continue to use censorship, and the media will continue to cover sensitive matters in an intrusive manner. A set of guidelines for the media to follow while covering terrorism or disasters is urgently needed. This method should not be construed as a precursor to licensing. Rather, it’s a step toward minimizing licencing and improving the ethical and professional behavior of reporters and editors.