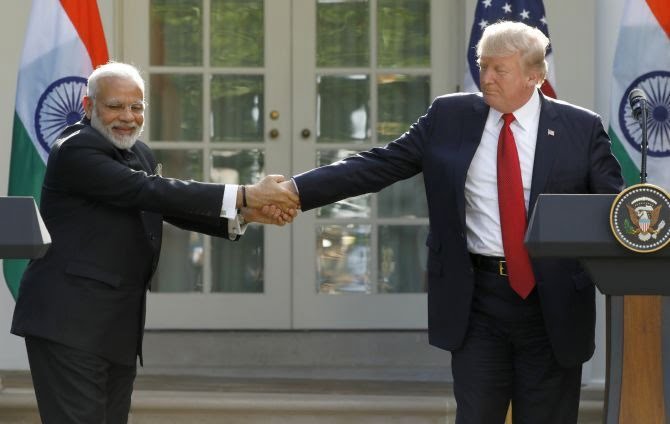 A secure video-teleconferencing capability between the three services of both countries, and foreign and defence ministries; enhanced sharing of maritime information; and meeting of a Military Cooperation Group later in the year to review the military-to-military engagement — these are some of the new and significant understandings arrived at after the Indo-US 2+2 ministerial meeting on Tuesday.

While the Basic Exchange and Cooperation Agreement (BECA) was one of the highlights of the outcome of the meeting, as #US Defence Secretary Mark T Esper and Secretary of State Michael R Pompeo met Defence Minister Rajnath Singh and External Affairs Minister S Jaishankar in #Delhi on Tuesday, these smaller but important understandings are expected to strengthen defence cooperation between the two countries.

To strengthen defence #industrial cooperation, the first summit of the Industrial Security Annex, signed at the second 2+2 dialogue held in Washington in December 2019, will be held later this year.

Military analysts said that beyond BECA, all measures are aimed at enhancing or expanding existing structures between the nations. At a time when Indian and Chinese soldiers are locked in a standoff at Ladakh for over five months, the enhanced defence cooperation is aimed at conveying a statement to the dragon.

In his statement after the dialogue, the Defence Minister said “We shared assessment of the security situation across the Indo Pacific” and “Reaffirmed our commitment to peace, stability and prosperity of all countries in this region”.

Singh said, “We also agreed that upholding the rules-based international order, respecting the rule of law and freedom of navigation in the international seas, and upholding the territorial integrity and sovereignty of all states are essential. Our defence cooperation is intended to further these objectives.”

Welcoming the US accepting India’s request “for cooperation in the advanced field of maritime domain awareness,” he said, “Both sides agreed to comprehend the requirements and initiate processes for joint development of requisite systems and expertise”.

On joint military exercises, the joint statement issued after the meeting said that the ministers “welcomed inclusion of the Royal Australian Navy in the U.S.-India-Japan MALABAR Naval Exercise scheduled to be held in the Bay of Bengal and the Arabian Sea in November 2020”.

#India, the #US, #Japan and #Australia are members of the Quadrilateral Security Dialogue, or the Quad, and Australia joining Malabar Exercise for the first time since 2007 will send a strong message to China, which has tense relationships with all four nations.

The joint statement mentioned under “advancing the defence and security partnership” that the ministers noted the “15th anniversary of the inaugural U.S.-India Defence Framework Agreement” and “commended what has become a comprehensive, resilient, and multi-faceted Major Defence Partnership (MDP)” between the two nations.

“They applauded the significant step of the signing of the Basic Exchange and Cooperation Agreement (BECA). And also welcomed enhanced maritime information sharing and maritime domain awareness between their Navies and affirmed their commitment to build upon existing defence information-sharing at the joint-service and service-to-service levels and explore potential new areas of mutually beneficial cooperation.”

The ministers expressed satisfaction about the “ongoing progress in the implementation of Logistics Exchange Memorandum of Agreement (LEMOA) and Communications, Compatibility and Security Agreement (COMCASA),” including the expansion of secure communications capabilities to include secure video teleconference capabilities between their respective navies, armies and air forces, as also between the respective foreign and defence ministries.

Along with reaffirming their commitment for deeper bilateral defence consultation and collaboration to explore opportunities to expand cooperative capacity-building efforts across the region, the ministers also stressed their commitment to “Pursue increased cooperation between the Indian military and U.S. Central Command and Africa Command, including broader participation in exercises and conferences, so as to promote shared security interests”, the statement said.

Both Indian and U.S navies had conducted Passage Exercise (PASSEX) when US Navy’s Carrier Strike Group led by USS Nimitz passed through the Indian Ocean, coming from the South China Sea in July. The ministers of both nations “welcomed” it in the joint statement and said they also looked forward to other military exercises in 2021.

Regarding better cooperation between defence industries of the two nations, the statement mentioned that the ministers “Decided to work together to realise the development of their respective defence industries”. Acknowledging “India’s contributions to the global supply chain of major defence platforms and commitment to defence innovation,” they “reiterated the importance of Defence Technology and Trade Initiative (DTTI), and stated their intention to fast track projects under DTTI”.

The statement said, “Recognising the importance of cooperation in defence innovation, the ministers welcomed the inaugural meeting between the Indian Defence Innovation Organization (DIO-iDEX) and U.S. Defence Innovation Unit (DIU) in July 2020. They also looked forward to the inaugural Industrial Security Annex (ISA) Summit later this year which would further strengthen defense industrial cooperation between both countries.”

NETIZENS TO THE RESCUE AGAIN: PLANT SELLER GETS A CANOPY TO SELL COMFORTABLY

10 IMPORTANT THINGS YOU NEED TO KNOW ABOUT BIHAR ELECTIONS 2020