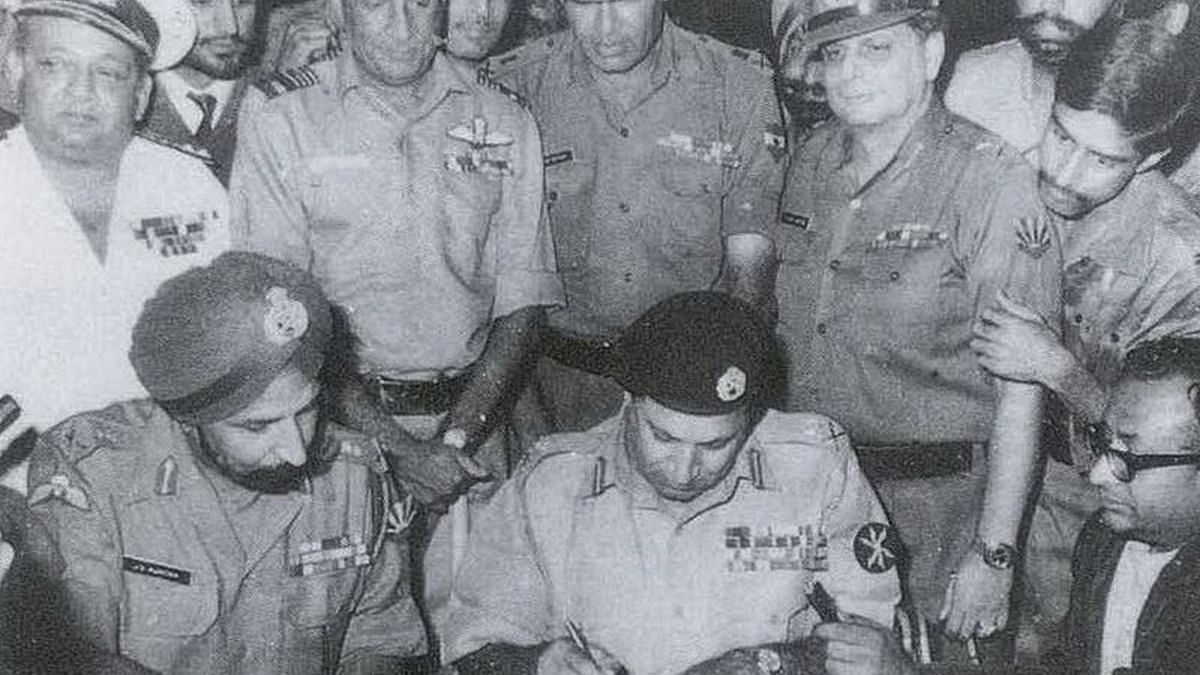 Instrument of Surrender being signed. Image Source: The Print

1971 was a turbulent year for the country of India. India had gained independence from the British less than 30 years ago. It was struggling to improve its economic GDP, had several crises and even had to work to provide relief work for the people who had suffered against a cyclone. However, among these events, the 1971 war with Pakistan was the most prominent event that took place. Mrs Indira Gandhi (the then Indian Prime Minister) along with Sam Manekshaw (the first and only Field Marshall of India) did an impressive job of tackling Pakistan and saving millions of Bengalis from certain death.

Bangladesh or East Pakistan had been given to Pakistan when the British had left the sub-continent. Pakistan, under Yahya Khan, had organized Pakistan’s first federal elections. When the results were declared, the Awami League had emerged as the single largest party in East Pakistan. The Pakistan Peoples Party followed the Awami League.  However, the military junta headed by Yahya Khan could not accept the verdict and stalled the declaration of the election results. As a consequence, East Pakistan led a civil disobedience movement against the military junta of West Pakistan. Angered by the acts of East Pakistan, West Pakistan sent in the military to curb the dissent in the East. The West Pakistan army and its supporters had conducted mass arrests of dissidents, mass rape of Bengali women and killed people that ranged from 200,000 to 3,000,000.

To escape the genocide conducted by the Pakistani army, millions of Bengalis took refuge in the neighbouring country of India. By then India had been supporting the Mukti Bahini movement of Bengalis. India had been lending support with the help of arms, ammunition and reconnaissance. India under Mrs Indira Gandhi had been contemplating conducting a war against Pakistan as she thought that it would be a cheaper option against housing the refugees that had come from East Pakistan. In April, Mrs Gandhi had asked Sam Manekshaw for his opinions on the war with Pakistan. He had, his account, stated that the army was not prepared and since it was the monsoon it would be disadvantageous for the Indian army. Mrs Gandhi accepted his reasoning and held back for a few months until December. The Soviet Union had reportedly warned Pakistan to not attack India as it would prove suicidal for them. However, Pakistan did not pay heed to the Soviet warnings and launched a pre-emptive against 11 Indian Air Force (IAF) bases northwestern region of India, including Agra. These pre-emptive strikes, also known as Operation Chengiz Khan, were inspired by the Israeli pre-emptive strikes during the Six-Day war in 1967. However, unlike Israel, Pakistan only flew 50 fighters against India. In the same evening, Mrs Gandhi addressed the nation and had said that the strikes conducted by Pakistan were a declaration of war and the IAF had responded accordingly. She immediately ordered the mobilization of troops and launched a full-scale invasion of Pakistan. The invasion showed an amazing coordination effort of all the three branches of the armed forces of India. There were two objectives of the invasion; one was to capture Dacca in the eastern front while stopping Pakistan from entering India on the western front.

Soon on 16th December, the Indian army on the eastern front had quickly encircled Dacca and given an ultimatum. The ultimatum had stated that the Pakistani army had only “30 minutes” to surrender. Upon hearing the ultimatum, the East Pakistan government collapsed, when Lt-Gen. A.A.K. Niazi (Cdr. of Eastern Command) and his deputy, V-Adm. M.S. Khan surrendered without offering any resistance. Then finally on 16th December Pakistan unilaterally called for a ceasefire and surrendered its armed forces to the Indian Army. By this declaration of Pakistan, the Indo-Pakistan war of 1971 came to an end.

The Instrument of Surrender was signed between Lieutenant General Jagjit Singh Aurora and Lieutenant-General A.A.K. Niazi at the Ramna Race Course in Dacca. Officially, all hostilities were ceased. Soon after the war, Bangladesh rose from the ashes of the war as an independent nation. India could finally breathe a relieved sigh as it no longer had to take in refugees that were causing a hole in the Indian exchequer. After Pakistan surrendered, India captured nearly 90,000 Pakistani soldiers and ill-regular militias. India soon returned all the captured prisoners of war (POWs) and the captured territories in the Simla Agreement.

Although India easily defeated Pakistan in the war, it had naval support from the USSR. The USA had sent in a nuclear aircraft carrier fleet to assist Pakistan in the war efforts and USSR had blocked the fleet from entering the Bay of Bengal by sending its nuclear-powered fleet. Without the support of the USSR, India would most likely have faced a naval war with the United States of America. Furthermore, India supported the Mukti Bahini to liberate their fellow Bengalis who greatly suffering at the hands of the West Pakistani army. The Mukti Bahini also played an important role in assisting the Indian army to encircle Dacca as they had the knowledge of the local terrain.

Without India’s help and intervention Bangladesh would have not been born and we would have suffered an economic crisis due to the incoming waves of refugees in the country. The 1971 war had boosted the credibility and might of armed forces that were lost during the Sino-China war of 1962. Today, Bangladesh is an important ally and a trade partner of India.