The Union Cabinet rolled out the Agneepath scheme yesterday that requires Agniveers (recruited soldiers) to serve for four years, including a training period of six months.

Under the 'Agnipath' scheme, efforts are to create a youthful profile of the Armed forces. It would help to train them for new technologies & also improve their health levels. This scheme will increase employment opportunities with new skills in different sectors: Rajnath Singh pic.twitter.com/ypemJyxf9i

The scheme was announced in a media briefing by Defence minister Rajnath Singh yesterday, shortly after the cabinet committee approved the same. “The Agnipath recruitment scheme is a transformative initiative that will provide a youthful profile to the armed forces,” Singh said. The step has been accepted after a series of discussions with the armed forces and promises a paradigm shift.

The #AGNIPATH scheme has been designed to enable a youthful profile of the Armed Forces. AGNIPATH allows patriotic and motivated youth to serve in the Armed Forces for a period of 4 years.
One time ‘Seva Nidhi’ package to be paid to #Agniveers pic.twitter.com/P3sS0xifOg

Earlier called the ‘Tour of Duty’ (ToD) scheme would facilitate both short-term and long-term recruitments. Candidates between the ages of 17-and-a-half years and 21 years would be eligible to apply for recruitment under this scheme. The qualification criteria for soldiers are likely to remain the same as before.

The scheme would bring a lot of changes in the recruitment of the army, navy, and airforce, adding about 46,000 soldiers in total annually. During the 4 years of training, the recruits would be trained by the armed forces for the skills required.

About 25% of those recruited shall be retained for an additional tenure of 15 years for permanent commission. The others would be allowed to leave and given a Seva Nidhi – a one time corpus amount of Rs. 11.71 lakh plus interest.
This amount would be tax-free and can be used by individuals to further their dreams. The soldiers engaged to serve for a further 15-year period would be subject to the existing terms and conditions of service. 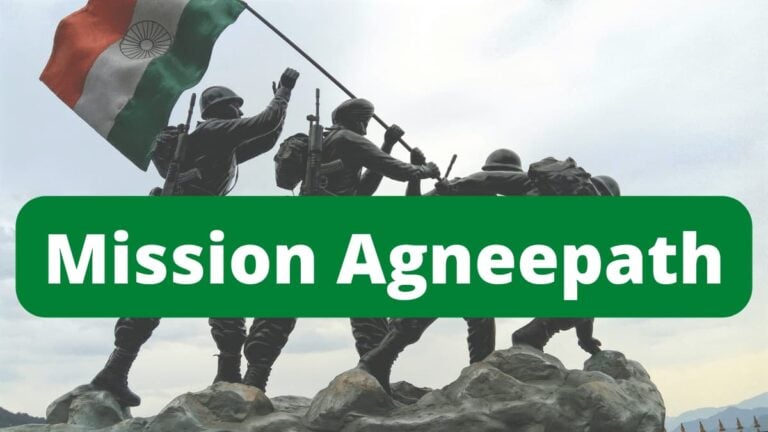 The armed forces would soon conduct recruitment rallys at various campuses as well as special rallys. Enrollment would be done through an online centralised system for all the three wings of defense. Specialised rallies and campus interviews at recognised technical institutes such as Industrial Training Institutes and National Skills Qualifications Framework, would be conducted for the same.

The eligibility criteria and educational qualifications for the Agniveers would be according to the post they want to serve. This includes the medical qualifications and physical fitness of the candidates.

Soldiers to be recruited under the scheme will be eligible to be deployed as combatants in key forward locations and there will be no restrictions on their roles. The proposal, which has been part of comprehensive reforms envisaged for the forces, has been deliberated upon extensively in the last two years.