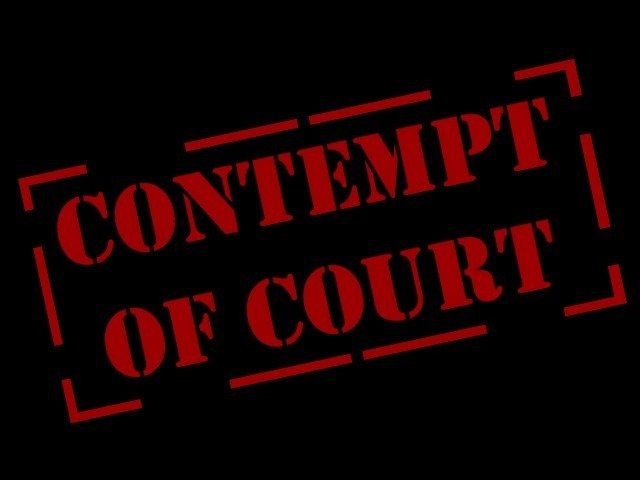 Contempt of Court. Well we all must have read about this either in our textbooks or our daily news updates. Prashanth Bhushan, a PIL lawyer of Supreme Court has now for the 3rd time been charged with Contempt (as it is simply known) and the hearing of his decade old case is scheduled for 5th August.

If you in case have forgotten/ not clear about what is Contempt of Court, here is a refresher. Although not defined by the Constitution, the Contempt of Courts Act 1971, refers contempt of the offence of showing disrespect to the dignity or authority of a court. It is further divided into civil and criminal contempt and the Supreme Court or the High Courts can punish for the offence with a small term of imprisonment up to six months, or a fine of Rupees 2,000 or both.

In 1970, the then Chief Minister of Kerala, EMS Namboodiripad had made a comment on how Karl Marx and Engels considered the judiciary as an instrument of oppression and that judged were guided and dominated by class hatred, class interest and class prejudices. The Kerala HC found the CM guilty of contempt and imposed a fine of Rs 1000. Namboodiripad then appealed to the Supreme Court. The bench which was led by then CJI Hidayatullah upheld the conviction and reduced the fine to Rs 50 saying that it doesn’t matter much if he misunderstood Marx and Engle’s teachings or deliberately distorted it, but the statement can cause an effect which could reduce the prestige of the judges and courts in the eyes of people.

The Sunday Tribune and Punjab Kesari

These two newspapers, the first an English daily newspaper and the latter a Hindi one were charged with contempt proceedings in 1997, after they had items which reported that the sons of two senior SC judges had received petrol bunk allotments from the Government of India discretionary quota. The government then filed an affidavit which claimed that those allotments weren’t made. The SC then initiated contempt proceedings against the two newspapers.

The famous author and activist was a part of the Narmada Bachao Andolan in 2002 when she was alleged to have shouted abusive slogans accusing the SC of lacking integrity and dishonesty with reference to one of its judgements. A few lawyers then filed a contempt petition and Roy denied the accusations made against her in an affidavit she filed. She also said, “By entertaining a petition based on an FIR that even a local police station does not see fit to act upon, the Supreme Court is doing its own reputation and credibility considerable harm.” Taking exception to 3 paragraphs in her affidavit, the SC ruled that she was guilty as she had committed criminal contempt of that court with mala-fide (in bad faith; with an intention to deceive) intentions.

Madhu, a journalist and the founding editor of India Today magazine in 2005 had 50 senior advocates rank judges of the Delhi HC on various parameters including punctuality, honesty and knowledge of the law and published it in her magazine. Some lawyers filed a contempt petition in Delhi HC and the court immediately ordered the police to seize all the copies of the magazine and restrained media from reporting about the proceedings. The bench led by the then Chief Justice of HC Arijit Pasayat, declared Tehran as guilty of contempt. The court found her to have scandalised the judiciary and ordered her to publish an apology.

In February 2017 Calcutta High Court judge, Karnan accused 20 judges of the high judiciary of corruption. The list also included ones who were then serving in the SC. He wrote a letter to PM Modi and Union Law Ministry to take action against these judges. Karnan however failed to provide any evidence to back his claims and the SC initiated contempt proceedings against him. In May 2017, after being restrained from attending his office at the HC, he delivered a verdict from home in which he sentenced 8 judges of the SC, including then CJI JS Kehar. The SC declared this as one of the gravest offences and gave Karnan a term of 6 months imprisonment making him the first sitting HC judge to be sentenced to jail.

The liquor baron was declared in contempt of court in May 2017 by the Supreme Court based on a plea by a consortium of banks for his failure to provide details of his domestic and international assets. Mallya violated the orders of Karnataka HC and had allegedly transferred $40 million to his children from Diageo. In March 2017, SC had asked him about the truthfulness of his assets and the alleged money transfer. Mallya failed to make a personal appearance in the court disobeying the orders to do so.

The then chairman of Reliance Communications, Anil Ambani, in 2018 had settled a dispute with Swedish telecom company Ericsson by agreeing to pay an amount of Rs 550 crores by 30th September 2018 in the National Company Law Tribunal (NCLT). When he failed to do so, Erricsson appealed to the SC. The Apex court gave a deadline of 15th December 2018 for RCom to pay their dues. When the company failed again, Erricsson approached the court in January 2019 to initiate contempt proceedings against Ambani. In February 2019, the SC declared Ambani guilty of contempt after he failed to make the payment.

The former president of the INC made an allegation in April 2019 that the SC had held that ‘Chowkidar (PM Modi) is a thief’ in regard with the Rafale verdict. BJP MP Meenakshi Lehi filed a petition in the Apex court to take contempt action against Rahul Gandhi. The court then asked Gandhi for explanation about the remarks and gave clarification that there was no occasion for the courty to make mention of the said observation. Gandhi filed an affidavit and said that his comments were made based on bonafide belief and general understanding. On 23rd April, the SC issued contempt notice to Gandhi and he filed another affidavit tendering unconditional apology. The court then reserved order on the case and rebuked Gandhi and warned him to be more careful in the future.

The state HC in May this year, initiated contempt proceedings against 49 social media users which also included a YSR Congress Loksabha member Nandigam Suresh and party leader Amanchi Kirshna Mohan for attribution of motives and intimidating SC and HC judges in abusive languages and thereby lowering the dignity of the institutions. This was the first time that a contempt case was filed against so many people.

Earlier this week, the SC has initiated fresh suo motu contempt proceedings against the lawyer Prashanth Bhushan for his tweets about the SC on 27th and 29th June. In his tweets, Bhushan had accused the judiciary of destroying democracy by keeping courts shut during the lockdown imposed in the country due to the pandemic. He had also tweeted about the CJI riding a Harley Davidson motorcycle belonging to a BJP leader during the lockdown without a helmet or a mask. Social media site Twitter has also been made a contemnor in the case as they did not take those tweets down. When Twitter said that they cannot disable a tweet without a court order, the SC bench replied “Why should we direct? On your own, you should have done it”. Earlier in September 2009, in an interview with Tehelka that half of the past 16 CJIs were corrupt. He was then charged with contempt and the hearing is now scheduled for 5th August after the last hearing in 2012. Bhushan also has one more contempt initiation against him from 2019 when he had tweeted about the Centre misleading the court in the appointment of interim director of CBI