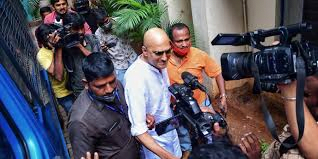 Filmmaker Mr Indrajit Lankesh made his statement to the Bengaluru City Crime Branch (CCB) about illicit drug trades and disclosed that there are many people in the industry who are involved in this illicit businesses when he called for the second round of his interrogation. This lasted for around half an hour. He carried a bag at that point of time and handed it over to the authorities. It is believed that around 14-15 people names were revealed in the investigation. Lankesh handed over some videos and pictures of actresses who were allegedly under the influence of illicit drugs at parties. He gave his statement addressing the media and said “Last time I was interrogated for more time than now. This time they called me for more clarification. I don’t want to be a spoil person in the investigation process. We have a very good team of CCB who will look after it and ensure we have a clean Film Industry to work in.” He also mentioned that his statement and the revealing act had already made people scared in the city, which he wanted to do. Not only in the Film Industry but also in the outside world, we do have many people even teenagers and children who are into drug addiction. According to him, he just helps the cops. Though the police had leads, but after his interrogation, everything was clear. Indrajit was sure that new names will soon be revealed by the police.

Not only in Kannada Film Industry, Kangana Ranaut from Bollywood made the statement that ‘Almost every star uses drugs and even many governments have helped the drug mafia grow in dealing with their business.” She claimed that Bollywood promotes nepotism and drugs. The government and the politicians turns a blind eye.

After Indrajit had word with the CCB on the 4th of September evening, Kannada actress Ragini Dwivedi’s residence was raided by CCB, she was also served a notice on Wednesday asking her to appear before the police on Thursday. She is in consultantion with her lawyers to handle the legalities of her circumstances.

The CCB co-ordinated their investigation with the help of Narcotics Control Bureau (NCB) and leading the police to apprehend three persons from the city. It has been alleged that dealers used to sell drugs to singers in the Kannada Film Industry.

The Central Crime Branch of Bengaluru probed Kannada actress Ragini Dwevedi regarding the Sandalwood Drug incident along with two more people. Bengaluru joint Crime Commissioner of police, Mr Sandeep Patil told the media that, “Ragini is arrested by the cops and taken into custody on 4th September, Friday evening.” Two of her partners who are associated with this case has also been arrested namely Rahul and Viren Khanna. The other person linked in this case, Mr K Ravishankar has also been arrested by the police.

It is believed that Ragini Dwivedi can bring out the names of the other culprits in addition to the ones already apprehended. On Friday (4th September 2020) she was questioned about any past connections she may have had in regard to illicit trades.

According to the Bengaluru police, Mr Viren Khanna is the main drug dealing culprit. He was in Delhi, when CCB personnel arrested him. He is now in custody. Ravishankar who is also known as Ravi, the other person of the case is a clerk at the Road Transport Office. He is rumoured to be the boyfriend of Ragini. He was also arrested and probed on Thursday. It is believed that Ravi and Viren have had long time associations with each other tending to illicit narcotic trading and businesses. Ragini is the third person to be arrested in this case. She was in close contact with Ravi as per the statement of the police.