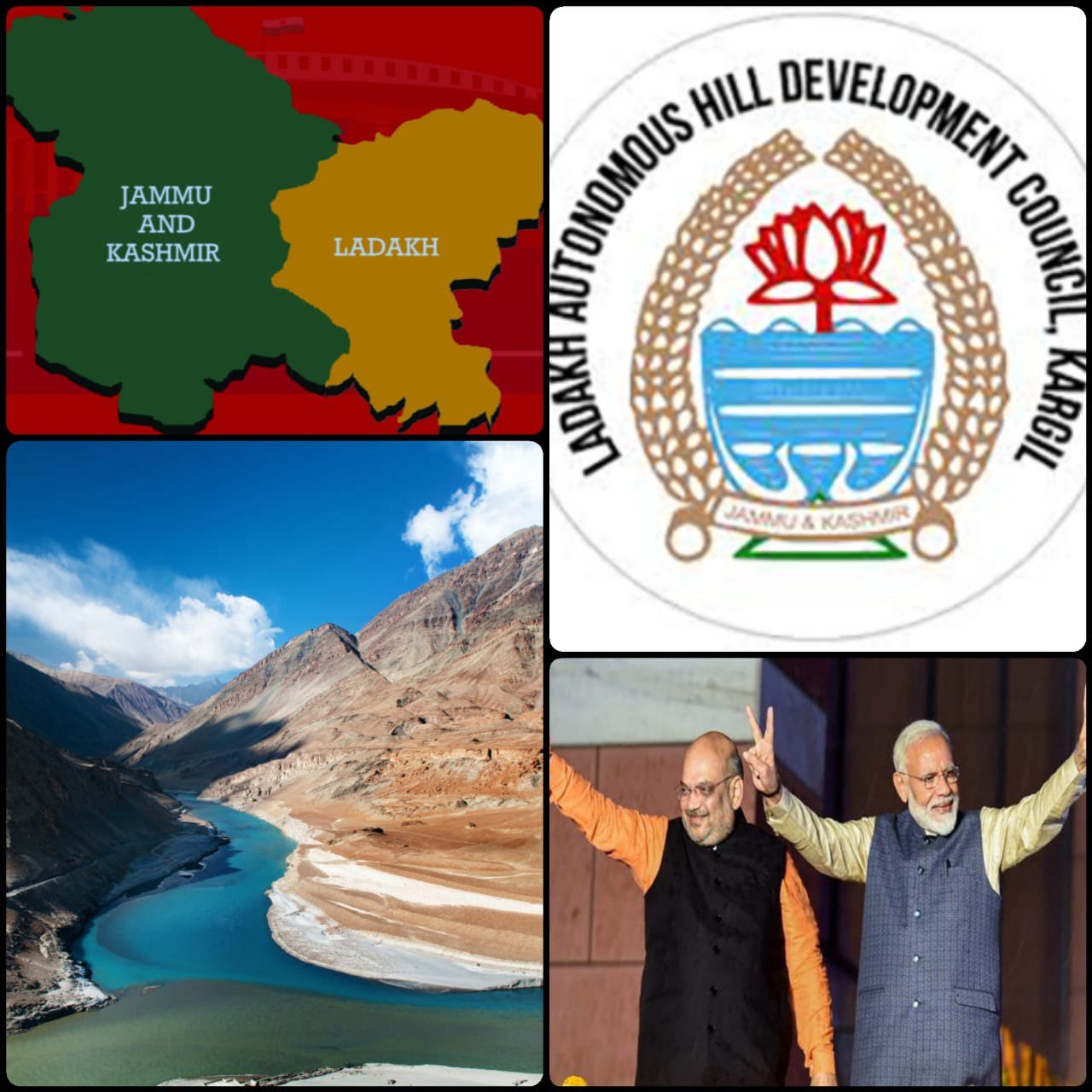 On 5th August 2020, it will be a year since the abrogation of Article 370 and the bifurcation of the state of Jammu and Kashmir into two Union Territories – Jammu & Kashmir and Ladakh. The people of Ladakh (especially the Buddhist monks who form 40% of the population) who awaited long to break away from the political drama of J&K, were delighted with the decision and the streets of Leh, witnessed some celebration too. However, not all were happy with the decision and the people of Kargil (especially Shia Muslims) protested the decision.

On the same day, when the Article 370 was abrogated, Jamyan Tsering, a BJP MP from the region, had said “If Ladakh is underdeveloped today, then Article 370 and the Congress party are responsible for it.” Keeping that in mind, let’s take a look at how far along is the development in the new UT, after a year.

The people of Ladakh say while they are happy with becoming a UT, they wanted to be one with a legislature and not without. While they understand that this is all very new and the government would need some time to put everything in place, they are also worried about their identity, lands, culture and jobs. Neither the resources nor the environment in Ladakh is capable of withstanding a large influx of people instead of their regular population which is just 3 lakhs.

Why are they worried about these things? On 5th August 2019, along with the Article 370, Government of India also scrapped the Article 35A which had given the legislature power to define permanent residents of J&K. The legislature ensured that government jobs and land ownership was reserved for these permanent residents. But with the abrogation, Ladakh is now open to workers and investors from all over the country to do their jobs or buy land pieces. According to the new legislations, the rights reserved for permanent residents are now available to domicile citizens too.

Who are the domicile citizens? There are the category of people who have lived in Ladakh for 15 years, studied there for 7 years or wrote their 10th or 12th examinations in the region. The reservations will also be held for central government employees and their children. However, the same is not the case for state government employees or their children. These domicile rights are a concern to the local youth as they are insecure about their own job opportunities now. They are complaining that they do not have enough job opportunities now due to the influx of outsiders. They also cannot avail jobs at J&K like before as even those jobs are now reserved for the domiciles instead of the permanent residents.

The National Commission for Scheduled Tribes, in last September, had recommended that the UT of Ladakh should be brought under the Sixth Schedule, which offers protections and a degree of autonomy for tribal areas. This was deemed necessary as a majority 97% of the local population are Scheduled Tribes. But the Government hasn’t initiated any work in this direction nor have they issued any constitutional guarantee in the matter which is becoming a matter of worry to the citizens of Ladakh, according to a statement given to scroll.in by Rigzin Spalbar, a Congress leader and the former chief executive councillor of the Ladakh Autonomous Hill Development Council.

Right, so the Ladakh Autonomous Hill Development Council. People of the region aren’t exactly happy with the level of Autonomy the Council holds anymore. There are two Hill development councils in Ladakh – in Leh and Kargil districts. These were formed inn 1955, under the Hill Development Council Act of 1955. These were created for local governing purposes as Ladakh had political indifferences with J&K. Each council also had their own chief executive councillors.

Now with the emergence of UT administration, inevitably, there are clashes between the two governing bodies. They often contradict each other’s orders, and this has been creating a sense of chaos and confusion among the people. According to Feroz Ahmad Khan, the chief executive councillor of Kargil, “All of this is happening because of the absence of business rules defining the roles and functions of both the setups.” Khan, along with people believes that the powers of the Council should be more strengthened instead of being cut down. Cheering Dorjay, the president of the BJP, Ladakh, quit the party in May this year due to the same reason. He said that when he tried to resolve the matter with the administration and senior BJP leaders, they dint pay any attention to it. The other reason for his departure from the party was also their failure to bring back stranded citizens of Ladakh from all over India after the COVID lockdown was announced.

Some of the other concerns bothering the people are that of the changes the influx of the people are going to bring to their environment and biodiversity. When people from all over start their industries and tourism establishments on the state, there is greater scope for pollution and exploitation and extraction of resources. Owing to the climate changes of the last decade, the snowfall levels have dropped, and rainfall levels have increased in the region, which is proving to be a problem for agriculture. The migration of some animals into the region has also been diverted now, maybe, due to the deployment of larger number of army troops in those regions according to Sajjad Kargili, a social activist from Ladakh.

There has also been some positive developments in Ladakh. The annual budget for the region this year was Rupees 232 crores, which is huge when compared to the one of last year which was only 52 crores. Ladakh police forces are now becoming stronger than ever as they are employing modern methods and technologies and have also gotten back all their men who were serving under J&K police units. New government offices have been built up in the UT and government officials are working longer hours to escalate the developments in Ladakh.

The Buddhist Association, the ruling party and the Congress leaders all have the same demand now. For the government of India, to protect their indigenousness and identity and constitutional safeguards. Their expectation of new beginnings witnessed a break due to the pandemic situation and the border tensions with China. The government diverted their attention to these and the people of Ladakh are now hopeful that their demands will soon be fulfilled as both these situations are now under control, according to the Central government.

7 ENGLISH CLASSICS THAT CAN BE REMADE INTO BOLLYWOOD MOVIES