EVERYTHING YOU NEED TO KNOW ABOUT FCRA 2020 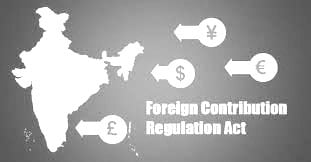 On 20th September Nityanand Rai, minister of Home Affairs proposed amendments to the Foreign Contribution Regulation Act (FCRA 2020). The previous amendment was passed on 19th August 2010, which was an act of the parliament of India by the 42nd Act of 2010. The scope of the act was to regulate the acceptance and utilization of Foreign contribution. FCRA was first introduced by Indira Gandhi in the year 1976 amidst the National Emergency which was imposed between 1975-1977.However, the FCRA has undergone major changes since.

What is the FCRA?

This act ensures and regulates the contribution of foreign donations so that they do not have calamitous effect on the internal security of the country.

Who are applicable to receive donation under the FCRA?

● Any group/NGO can receive funds from outside the country.

It is mandatory for all NGOs to register themselves under the FCRA. The registration is initially valid for 5 years and it can be renewed subsequently if they meet the criteria i.e only if the government feels that the work getting done is not violating any government set norms.

Who are not eligible to register under FCRA?

abolished FCRA law paving the way for political parties to receive funds from:

1. Indian subsidiary of a foreign company

2. A foreign company on which an Indian hold 50 percent or more shares.

In which fields do the registered associates receive contribution?

When is a registration suspended or cancelled?

If the MHA finds anything suspicious in any accounts of an association and if they receive any inputs against its functioning, they can suspend its FCRA registration initially for 180 days.

Until a decision is taken, the association cannot receive any new donation and cannot utilize more than 25% of the amount available only with the permission of the MHA.

Listed below are few key aspects of the amendment which were discussed in the parliament on Sunday.

1. All public servants defined by IPC are eligible to receive funds under FCRA.

2. The NDA reduced the percentage to 20% of the amount, where the fund can only be spent on the administrative purposes (such as office expenses, rental, salaries and other miscellaneous expenses)

In 2010, the UPA amendment allowed spending 50% of donation

3. The government will demand Aadhar number of all the employees involved since AADHAR card is mandatory.

4. If the NGOs have violated any government set rules and regulations and have raised suspicions as to how they use their revenue, they can suspend its functions for 180 days and if the crisis is not resolved this can be extended by another 180 days, therefore totaling 360 days.

6. Foreign donations can only be transferred into your account only at a SBI designated branch by a SBI designated officer representing the government of India. This can later be transferred to your personal account. Even the interest you earn on the deposits of your account will be considered a part of FCRA utilization and is also a part of the funding one receives.

The law, which was enacted by Indira Gandhi, which was made tougher by the UPA, now is being tightened by the NDA.

What are the NGO’s /Associations which are registered under the FCRA expected to do with the amendment Act of FCRA 2020?

BASIC GUIDE TO HOW OTT PLATFORMS WORK; FOR PRODUCERS AND CONSUMERS