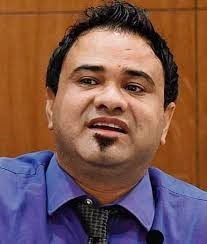 Dr Kafeel Ahmed Khan is a Paediatrician by profession. Khan was born in Uttar Pradesh in the year 1982. He then completed his MBBS and MD in Paediatrics from Manipal University. If we talk about his family, he belongs to a well-educated family which consists of father, Mr Shakeel Ahemad who is a businessman by profession and mother who is a home maker. Dr Kafeel Khan got married on 4th April 2015 to Mrs Shabista Khan and they are blessed with two children.

After completing his degree, he started practising as an Assistant Professor in SIIMS, Gangtok. Back in 2016, on 8th August, he got permanent commission as a lecturer of Paediatrics in Baba Raghav Das Medical College, Gorakhpur. He also owns a private nursing home which is named as “Medispring Children Hospital” at Azad Chowk, Gorakhpur. He also wrote a book on Clinical Paediatrics for MBBS students and many a times he arranges free camps for the needy people along with free medicines. He is well known for his social work and humanity.

It was on 10th August 2017 when he was servicing at a medical college, when around 60 children died due to shortage of oxygen. But he did not run away from his duty. He tried his best to save the lives of the children by arranging the oxygen cylinders.

He did try his best, got praised and turned into a hero overnight. When the police started investigation for this incident, the UP government failed to acknowledge his efforts and made a remark that the oxygen supply was cut off due to pending bills of the hospitals. The police officials added that without performing his duty he was practising in his private clinic at his hometown.

Later a FIR was registered against him and he was suspended from his job. On 2nd September he was arrested, and the court issued a non-bailable warrant against him.

Later in the year 2017, Indian Medical Association along with many doctors and activists raised their voices to bring him justice. After a quite long enquiry process, he was released from the punishment because the investigators did not found any evidence against him. Later in several interviews Kafeel Khan stated that he was fooled by the Yogi Adityanath’s government.

In the month of January, UP Task Force arrested him for giving an #anti-CAA protest speech. Dr Khan was also accused of creating enmity among the religions. Then on 1st of February he was sent to Aligarh Jail and later moved to Mathura Jail. Again the protests of the activists were raised to release Khan. But he got bailed from CJM court.

After Dr Kafeel Khan was released from the jail, his brother got attacked by some strangers and somehow, he survived the attack and was absolutely fine. Back in 2019 Dr Kafeel claimed that people stopped doing business with his brothers as they were afraid of Yogi Adityanath and the ruling government.

By fighting and overcoming all the negativities and the hurdles, he finally deserved what he was worthy of and received an Award in the field of Health\Humanity by Human Rights Counsel at Global Peace Summit 2020, Mumbai. No matter what, now everything is on track and Dr Kafeel Khan is popular personality on social media with millions of followers. He handles his official Instagram account “drkafeelkhan” where he shares regular messages and updates.