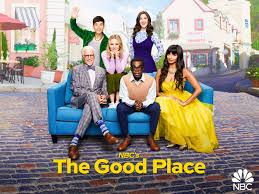 Do you remember that time when you finished a bellowed sitcom and all you could think was, “Man this is comedy gold but the drama was so exhausting”, or when you watched a thriller you were like, “This is way too much fantasy, what am I relating this to”? Simply put, you might have watched a lot of shows and felt incomplete at the end either for the elasticity of the plot, the mismatching of the romantic interests or the most infamous trait of TV shows – a bad finale.

Well, worry not because I am about to introduce you to a show that will meet all your expectations from a TV show. When you hear the name “The Good Place”, you might be like “The What Now” or “What a generic name”, but believe me on this, there is nothing generic about the show.

This four season moral and ethics handbook of a TV show is sure to leave you teary eyed for the comedy, for the romance, for the human relationships and perhaps leave you with a stomach ache for all that ethical dilemma. (You have to watch the show to understand this reference.)Without giving much spoilers, let me take you into the many loveable traits of the show.

Primarily, this is a show based on the ultimate question of whether or not an afterlife exists, and if it does exist what is the criteria for you to get into the much adored Good Place or the much feared Bad Place.

This afterlife is situated par the rules of time and space and all other dimensions and you live in an endless circle of “Jeremy Bearimy” – the time cycle that defines the afterlife in the show. The story opens up to Kristen Bell’s Eleanor Shellstrop who finds herself in The Good Place after she has died from a very remarkably selfish human life and ends up questioning her selection into the Good Place. She soon meets her supposed soul mate, Chidi Anagonye played by William Jackson Harper and upon learning that he was a moral philosophy professor, requests him to help her stay in the Good Place so as to escape from all the agony and pain from the Bad Place. We also have Jameela Jamil’s super extravagant Tahani Al-Jamil and the ever so goofy Jason Mendoza played by Manny Jacinto. We are introduced to these characters as the very self-absorbed rich snob and philanthropist Tahani and the silent Buddhist monk Jianyu. It is only after Eleanor tries to dig out dirt about the other characters that we learn that three of the four main characters are all deeply flawed and must improve. As a result, they join the ethics class by Chidi and strive to better themselves. They are often thrown curveballs at and are successful in figuring out the solutions.

However, it is at the end of season one that we realise that there is something fundamentally flawed with the Good Place because they end up getting tortured at the end of the day and find that un-amusing every time. Michael, played by Ted Danson poses as the Good Place architect but is revealed to be something else as the season comes to an end. The next three seasons are about the characters finally identifying what is wrong with where they live and confronting the Bad Place devils, the Good Place angels and the Judge of the Universe herself ultimately.

What is remarkable about the show is that every demon and every human goes through character growth and it inspires the audience to take certain measures to improve their lives as well. The audience comes to fall in love with all the relationships formed, deformed and reformed due to circumstances and cannot stop themselves from being in awe of the ever so talented D’Arcy Carden and her portrayals of the multiple Janets.

If you are somebody who wishes to know about what the universe might be like and often argue about what it definitely should not be like, this is a perfect show for you. Even better, if you absolutely hate humans and cannot stop calling out toxic behaviours, watch this show and look at how innovatively the Bad Place devils and the Judge of the Universe continuously and hilariously call out these problematic behaviours.

Who knows, in a way you might end up getting all the answers you ever wanted, or you might realise that there is no answer at all, just like Chidi did. I just want to say that of all the fictional content I have consumed, this show had the best finale so far, it just completes the circle.

To be or not to be a liberal economy?