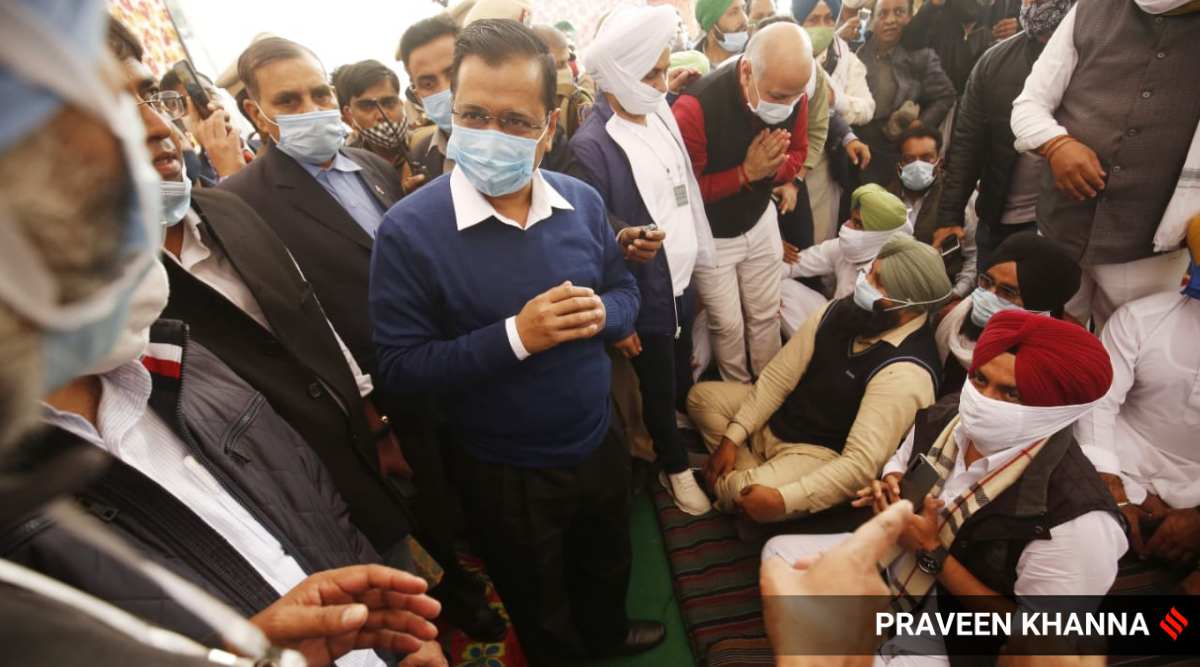 The ruling #AamAadmiParty (AAP) in Delhi has alleged that Chief Minister #ArvindKejriwal has been put under house arrest after he visited the #Singhu border to review facilities for #farmers protesting the #agri-marketing laws on Monday. Addressing a press conference, the AAP spokesperson #SaurabhBhardwaj claimed the house arrest.

“On the direction of the Home Ministry, the Delhi Police has put Chief Minister Arvind Kejriwal under house arrest ever since he visited farmers at Singhu Border. No one has been permitted to leave or enter his residence. Our MLAs were beaten. There is heavy barricading and even the house maid is not being allowed inside his house…We will all march towards the CM’s residence and ensure that the chief minister is released,” he said.

Meanwhile, the #DCP (North) #AntoAlphonse has denied all such allegations and said in a tweet that, “This claim of CM Delhi being put on house arrest is incorrect. He exercises his right to free movement within the law of the land. A picture of the house entrance says it all.”

The Chief Minister has said that he had surveyed the sanitation and water availability at the site of Singhu border, not as a CM but a #sewadar.

“I am not present here as a Chief Minister, I have come here as a sewadar, I have come here to serve the farmers. The farmers put in all their hard work and efforts and grow food for us. They are in a huge problem today, and it is the responsibility of all the citizens of the country to stand with the farmers and work for their service,” he told reporters later.

On grounds of the three farm laws, the farmers across the country have been seeking the unconditional #repeal of the three #FarmLaws that they view as severely harmful for them. They have called for a symbolic nationwide strike and the AAP is among several other opposition parties, including the #Congress, #TrinamoolCongress, #ShivSena and #NCP, supporting the #BharatBandh call.

To know more about the updates of the Bharat Bandh, click on the link: https://www.thenewshamster.com/bharat-bandh-the-situation-around-the-country/

Anticipating trouble, NDTV has reported that several leaders of various parties in Uttar Pradesh, including SP Chief Akhilesh Yadav, have allegedly been #detained or put under house arrest-like conditions. On Monday, Mr Yadav tried to break barricades and leave for a protest rally in Kannauj, but was detained by the police.

“Delhi chief minister @ArvindKejriwal’s house arrest means that the BJP government wants to stop every voice that is in support of farmers,” health minister #SatyendarJain tweeted in Hindi with the hashtag #BJPHouseArrestsKejriwal.

The AAP also referred to Kejriwal’s refusal to turn the city’s nine stadiums into #DetentionCentres for farmers last month when the protests began. “The Kejriwal that stopped the stadium from becoming jails, today the BJP has made the same Kejriwal’s house a prison,” the AAP tweeted in Hindi.