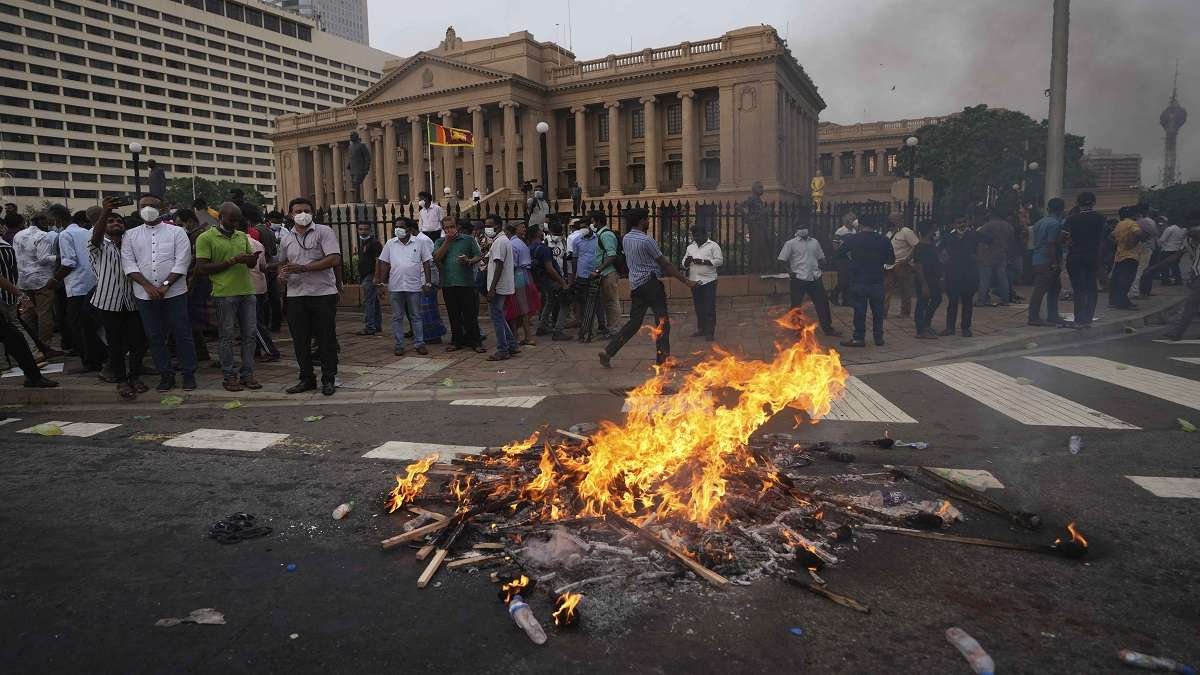 Why is Sri Lanka going through an economic calamity?

Persistent economic mismanagement by successive governments created and sustained a twin deficit –twin deficits signal that a country’s national expenditure exceeds its national income, and that its production of tradable goods and services is inadequate. The crisis was worsened by deep tax cuts promised by Rajapaksa’s party during the 2019 election campaign.

If the government itself creating a fiscal deficit to destroy the Lankan economy was not enough, then came the COVID-19 pandemic that crumbled the tourism dependent economy. More than half a million people have sunk into poverty since the pandemic struck, forcing many to go to bed without dinner. Moreover, Russia’s war in Ukraine is making it extremely difficult for Sri Lanka to acquire oil at affordable rates causing hyper-inflation across the country.

Lankan Prime Minister Rajapaksa had urged visiting Chinese Foreign Minister Wang Yi to waver China’s debt to Lanka as a favour. Over $2 billion are due to be paid to China in 2022. The tropical island owes more than 10% of its foreign debt to China.

The country is a classical example of China’s debt-trap diplomacy as it borrowed humungous loans from China at high interest rates for infrastructure development that it now finds difficult to repay. Built by Chinese loans, the Hambantota port was leased to China for 99 years as the port turned into a loss-making giant. Unfavourable terms and conditions of Chinese loans played a vital factor in worsening the economic disaster Sri Lanka is facing.

India on Saturday delivered 40,000 MT of diesel to Sri Lanka to help ease the power crisis in the island country which is witnessing acute power cuts. A part of the US 500 million oil line of credit (LoC) extended by India to Sri Lanka, this is the fourth consignment of fuel delivered from India to Sri Lanka under the LoC.

Furthermore, India has supplied around 200,000 MT of fuel to the island nation over the last 50 days. Apart from going out of the way to help Colombo through loans, and the supply of medicines, India has decided to aid Sri Lanka with a $1 billion credit line with India for the procurement of food among other essential items. Earlier in January this year, the Reserve Bank of India (RBI) had announced a $400 million swap to help Sri Lanka pump in some reserves.

What can India learn from Sri Lanka?

Sri Lanka’s case is a case study about how offering freebies and tax cuts can lead to severe economic disasters. It is an important lesson for Indian states as today in a 4-hour long meeting, several top bureaucrats briefed Prime Minister Narendra Modi that the announcements of freebies in several states are financially unsustainable and that they needed to be persuaded to make a balanced decision that aligned political imperatives with economic stability.

States like Tamil Nadu, Maharashtra, and West Bengal categorically have higher debt separately than Sri Lanka which shows the contrast that India must act upon its economic policies. The discussion focused on socio-economic development, according to some officials, and the PM asked the secretaries to take all feasible efforts to reduce poverty and come up with governance ideas given their broad experience in state governments and at the Centre. The bureaucrats said that states needed to balance their fiscal health of the state and political compulsions.

BJP, AAP, and Congress too had promised free LPG connections and free pilgrimages for senior citizens and other such freebies like electricity during the elections in UP, Punjab and Goa. Officials cautioned that this competition among political outfits will seriously affect the long-term financial health of the Centre and the states. The states which were red flagged were Punjab, Telangana, Delhi, Andhra Pradesh, and West Bengal. Several political parties in these states had promised free power to the people putting a lot of pressure on the state exchequer. Doles needed to be provided for in the budget and freebies were taking away funds needed for critical sectors such as health and education.