Maharashtra’s Amravati witnessed a brutal murder of a 54-year-old chemist on June 21. The murder motive was ascertained on July 2 when the accused told the police that the chemist was murdered because he supported Nupur Sharma’s statements and shared the same on WhatsApp. The chemist, Umesh Kohle, had shared his support on a public WhatsApp group which angered his killers. A similar style of murder was carried out in Udaipur a couple of days ago. The nation and various politicians expressed their shock over the murder.

Image for representation only.
Image Source: The Indian Express

Union Home Minister Amit Shah transferred the Amravati case to the National Investigative Agency (NIA) after the local BJP leaders claimed that Amravati police were trying to conceal the reason behind the killings.

MHA has handed over the investigation of the case relating to the barbaric killing of Shri Umesh Kolhe in Amravati Maharashtra on 21st June to NIA.

The conspiracy behind the killing, involvement of organisations and international linkages would be thoroughly investigated.

While speaking with reporters, the police told, “Kolhe ran a medical store in Amravati city. He had allegedly shared a post on some WhatsApp groups in support of Nupur Sharma for her comments. He even shared the post in a WhatsApp group in which some Muslims were also members, including his customers.”

On June 21, when Mr Kohle was returning home on a two-wheeler after closing his shop, two men on a bike stopped him and slit his throat and killed him. The heinous act took place between 10 PM and 10:30 PM. His son, Sanket (27), and his wife, Vaishnavi, were accompanying him in a different vehicle.

According to an official, “When all of them reached near Mahila College’s gate, two motorcycle-borne men came from behind and blocked Kolhe’s path. A youth alighted from the motorcycle and stabbed Kolhe on his neck with a sharp weapon and escaped from the spot. Kolhe collapsed on the road in a pool of blood. Sanket rushed him to a hospital, where he died.”

The police have so far recovered the murder weapon and obtained the CCTV footage that captured the entire sequence of events. 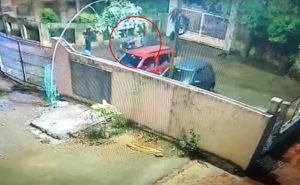