Withdrawal of US troops: Afghan civilians take up arms against Taliban 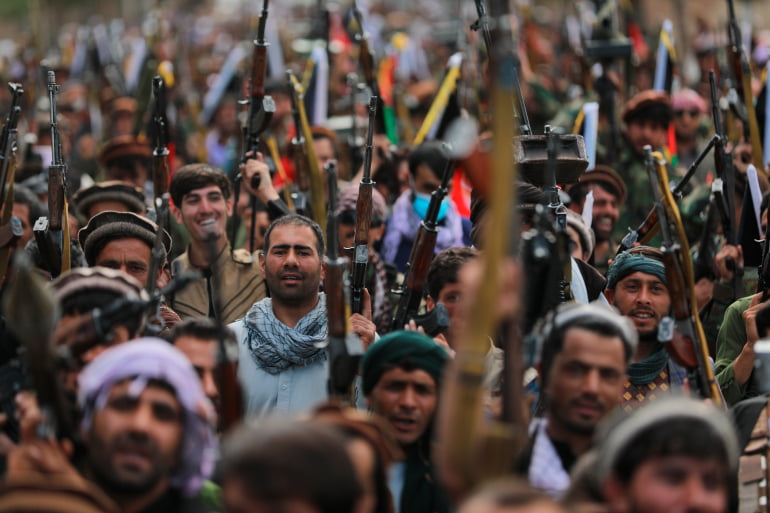 India’s historical and cultural neighbor Afghanistan is once again on the brink of turmoil with signs of relapse into its dark days. This comes after the gradual withdrawal of the United States armed forces stationed for nearly two decades in Afghanistan, to fight the Islamic fundamentalist political and military organization, the Taliban. The remaining troops with the strength of 2,500-3,500 will be withdrawn by September.

The Taliban now claims to control 85% of Afghan territory that is 250 of 398 districts. Meanwhile, sensing the danger and driven by the fear of being pushed back to its unjust past, the Afghan civilians including the women have taken up arms to fight the Islamic extremist group.

Partaking in a rally against the Taliban, Sher Mohammed Afghanzai, resident of Uruzgan province of Afghanistan says, “The situation in the country is critical, we have gathered to defend our homeland and support the government and national armed forces. Speaking in one voice we call on the people on the opposite side to accept peace. Peace is what people want.”

Optimistic about their efforts to bring an end to the Taliban, Resident of Kapisa province, Mohammed Yosuf Mayel says, “The Taliban might seize control of a few districts but it is temporary and they cannot keep them. The Mujahedin (guerrilla fighters) will rise against them. In the past, it did not regroup against them because there was a central government, the Afghan national army, and the Afghan police. If the Afghan army shows weakness the Mujahedin will stand by their side and support them.”

The Northern provinces of Afghanistan Kunduz, Faryab, and Balkh have witnessed fierce fighting and escalated since the United States started withdrawing its troops. The UN special representative in Afghanistan Deborah Lyons in a press conference delineated the Taliban’s stronghold and said that most of the captive provinces surrounding the province capitals. She cautioned that this is the tactic which the Taliban are using to position themselves to capture the capital provinces, once the troops are completely withdrawn.

Afghanistan in 1978 witnessed the ‘Suar revolution’, (Suar – the second month of the Persian calendar in which the coup took place). A coup, led by the Peoples Democratic Party of Afghanistan was backed by the support of the Soviet Union. The successful coup resulted in the death of Afghan president Mohammed Daud and he was replaced by the government led by Nur Mohammed Tarakki.

The soviet union intervened and supported the Afghan communist government against the anti-communist Muslim guerillas in the Afghan war in the year 1978 and remained in Afghanistan till 1989. The Afghan communist party introduced various land reforms and started modernizing the nation, which did not go well with the traditional population and the established power. The exit of the Soviet Union in 1989 saw the emergence of the Taliban. The main objective of the Taliban was to enforce their version of sharia, or Islamic law once in power. The Taliban started capturing the provinces of Afghan and had 90% under its control by the end of 1998.

The Taliban soon gained popularity for rooting out corruption and making the roads and connections safe for trade and commerce but at the same time, it tried to enforce Islamic punishments. The convicted murderers faced a public execution, the thieves who were found guilty were being amputated. Men were supposed to grow a beard and women had to wear an all-covering burqa, which again did not go well with the people

It further banned television, music, and cinema, and disapproved of girls aged 10 and over going to school and were accused of several human rights violations. It grabbed the attention of the world after the attack on the World Trade Centre in New York infamously known as the 9/11 attack by Osama bin Laden and Al-Qaeda who were supported by the Taliban. Post 9/11 the United States along with the United Kingdom invaded Afghanistan and waged a war on terror which will mark two decades this September.

After realizing that the Taliban cannot be uprooted as long as it received support from Pakistan, the US sought the help of Pakistan to negotiate with the Taliban. As a result of these negotiations in 2018 both the US and Taliban agreed and signed the peace deal. The features of this deal :

Biden on the troop withdrawal

Many experts and diplomats shared their inconvenience regarding the pact and predicted that it would worsen the conditions in Afghanistan. Speaking about the troop withdrawal Joe Biden, president of the United States in a press conference said, “we announced our withdrawal in April and we would be up by September and we are on track to meet that target. We did not go to Afghanistan to nation-build, and it’s the right and the responsibility of the Afghan people alone to decide their future and how they want to run their country. Together with our NATO allies and partners, we have trained and equipped nearly 300,000 current serving members of the military, the Afghan National Security Force, and many beyond that who are no longer serving.”

Defending the troop withdrawal as the right decision and by giving examples of recent history, Biden says, “When I decided to end the US military involvement in Afghanistan, I judged that it was not in the national interest of the United States of America to continue fighting this war indefinitely. I decided with clear eyes, and I’m briefed daily on the battlefield updates. But for those who have argued that we should stay for six more months or just one more year, I ask them to consider the lessons of recent history. In 2011 our NATO allies and partners agreed that we would end our combat mission in 2014. In 2014, some argued one more year. So we kept fighting and I kept taking casualties. In 2015, the same. And on and on. Nearly 20 years of experience has shown us that the current security situation only confirms that just one more year fighting Afghanistan is not a solution, but a recipe for being there indefinitely. It’s up to the Afghans to decide the future of their country.”

With Taliban on the prowl to regain its hold over Afghanistan and the rise of armed anti-militancy groups pose a great threat to its peaceful co-existence and harmony.

Shukria Barakzai, a diplomat and a former lawmaker cautioning the impending danger, says, “Arming people is harmful in the short term and long term. Any armed force created outside legal structure has two consequences, first, it will add to the presence of illegal armed groups, and second, it will add to the conflicts that already exist between the ethnic groups and local commanders which will worsen insecurity.”

Barakzai advises that anyone who wants to fight against the Taliban should join the Afghan security forces and operate under their command.

The one skill that EVERYONE must know