WHY PM MODI’S VISIT TO LADAKH WAS NOT VERY DIFFERENT 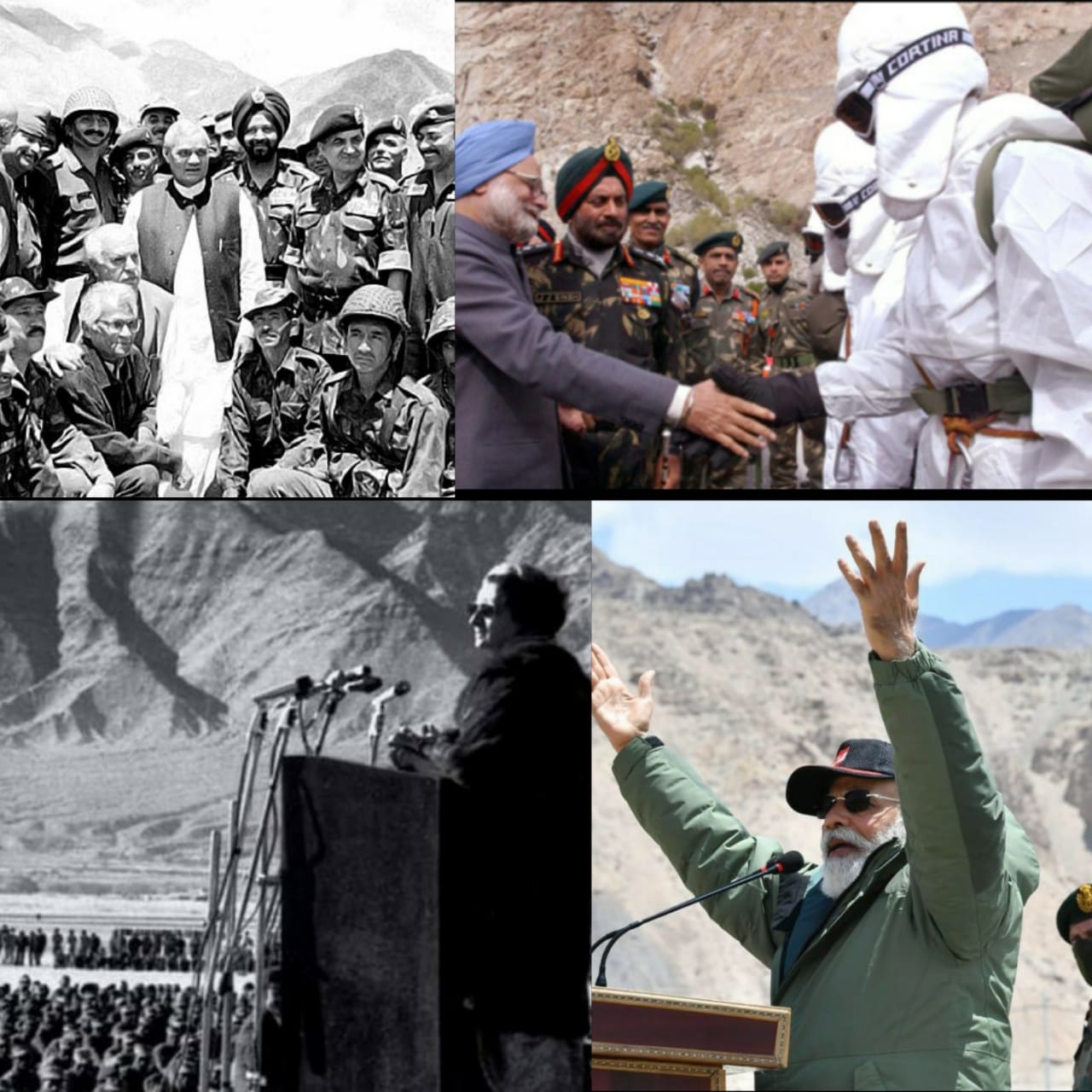 Prime minister Narendra Modi paid a surprise visit to Nimoo, in Ladakh, yesterday morning to interact with Indian soldiers amidst the border tensions between India and China. He was accompanied by Chief of Defense Staff (CDS) General Bipin Rawat and Army Chief General MM Naravane. After initial briefing by senior army officers, PM Modi paid tributes to the 20 martyrs from last month and said that they have proven that brave soldiers will not allow the nation’s pride to be hurt.

Nimoo is situated 11,000 ft above the sea level on the banks of Indus river. So, when the 69-year-old PM visited the place, social media started piling praises about how it was such a bold move for him to visit Ladakh, at this age. The visit and address were regarded as a befitting warning to China, while note this, our PM never took the name of any country throughout his address. In his camouflage uniform and his sporty sunglasses PM Modi made a bold impression which led to a lot of people thinking that he was the first PM to do so, when he was just the first Minister from the cabinet (after the defense minister’s visit was cancelled) who visited the soldiers after the recent border tensions began.

A little down the lane, one of the giants of Indian politics, Atal Bihari Vajpayee visited Kargil war zone in 1998, becoming the first ever Prime Minister to visit an active war zone. After realizing that the mortal remains of the martyrs weren’t sent back to their families, he immediately made arrangements for the remains to be sent back. Clad in his usual attire, a kurta and a vest, Mr Vajpayee had a simple message for the soldiers “claim a high moral ground; do not cross the LOC. Claim what’s ours but don’t provoke an unnecessary war”.

Although “Siachen mein hamara jawan lad raha hai” is one of the most popular phrases used in the recent days, the first PM to ever visit the harshest and the world’s highest battlefield, Siachen was Dr Manmohan Singh. At the age of 73, having already undergone a bypass surgery, the former PM took a trip to the glacier at the height of 12,000 ft above the sea level to secure a first-hand account of the troops’ conditions there. While addressing the soldiers at the Base camp situated 11,118 ft above the sea level, he said “”I wanted to see for myself what your living conditions and arrangements are and what are your problems and what the government can do to address those”. He also took an aerial survey of the regions where oxygen levels were substantially low, and breathing could become very difficult.

Before lauding PM Modi as the only PM to ever make such visits or the first one to have an interaction with soldiers at a war zone, netizens should take note of all the previous visits made, just to be factually correct, if not for anything else. This visit may have garnered more attention because of the tendency of people on social media to celebrate everything their favorites do and disregard everything the people they don’t like did/are doing. Or maybe because the other PMs did not invite media personnel everywhere they went and made such a big deal out of every address. In conclusion, Mr Modi did what many other PMs have done before during wartime and not anything different.

THE NEXT STEP TOWARDS JUSTICE FOR JAYARAJ AND BENNIX