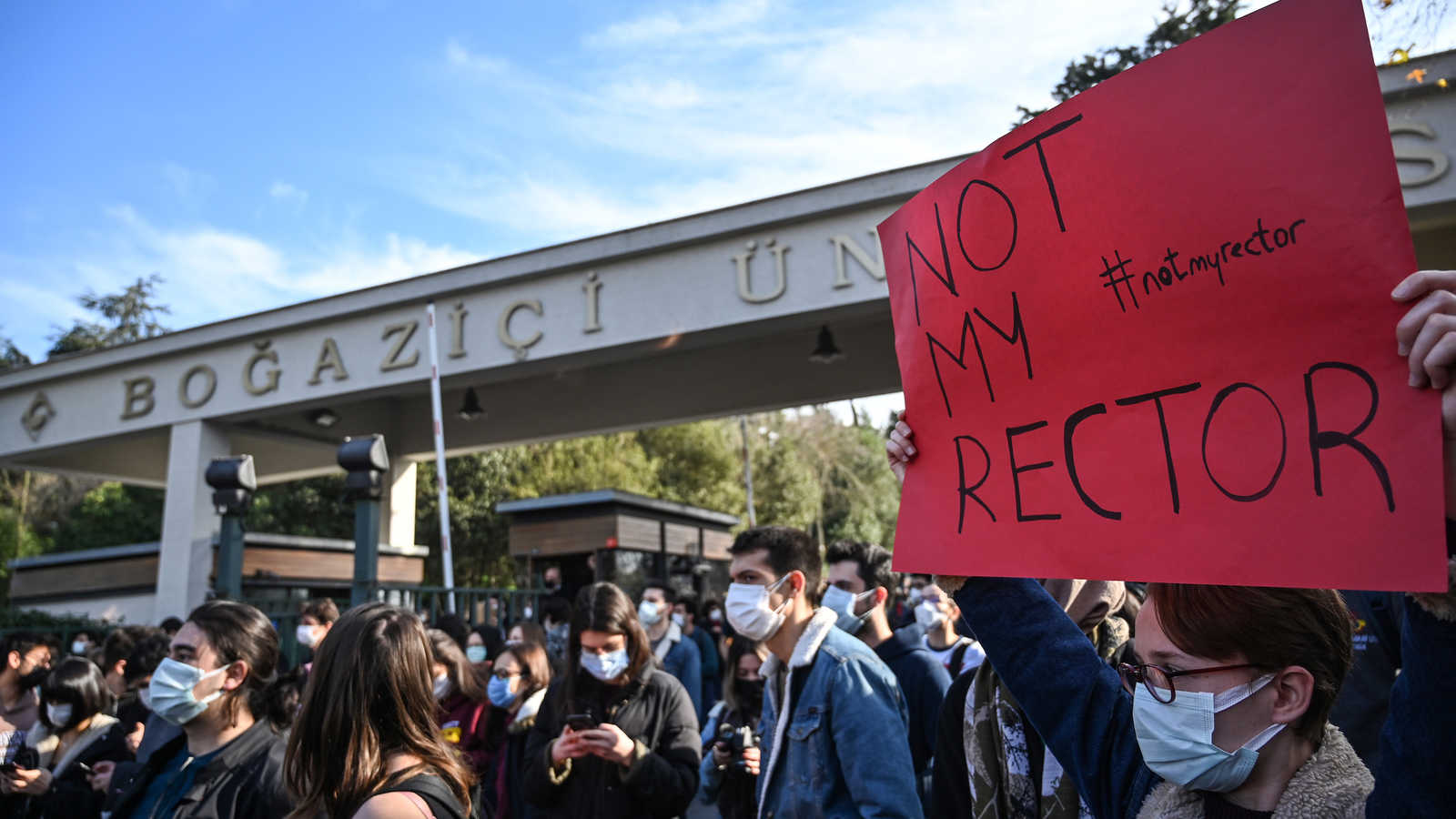 Students chant slogans and hold placards on January 4, 2021 in front of the Bogazici University in Istanbul during a protest against the direct appointment of the new rector to Bogazici university by Turkish President Recep Tayyip Erdogan. (Photo by Ozan KOSE / AFP) (Photo by OZAN KOSE/AFP via Getty Images)

Escalating protests over the appointment of a state-approved reactor at a renowned Istanbul college have become a sudden impetus for Turkey’s baffled and underemployed youth to vent their dissatisfactions at President Recep Tayyip Erdoğan’s government.

It’s been over a month now since teachers and students at Turkey’s Bogazici University, which is acclaimed to be one of the prestigious universities in the country, have been protesting against the appointment of a former scholastic, and political candidate as the Istanbul-based reactor.

Turkish President – Recep Tayyip Erdoğan, appointed Melih Bulu which is viewed as an undemocratic move by demonstrators, especially since Bulu recently applied to run for parliament as a part of Erdoğan’s ruling Justice and Development Party.

The decision to appoint Bulu was denounced as authoritarian by university members, and was widely interpreted as the government’s attempt to invade one of the nation’s last left-inclining institutions : Bulu is the first minister chosen from outside the university community since Turkey’s 1980 military coup.

On 30 January, 2021, i.e., on Saturday, four students were captured over a photograph that blended LGBT symbols with Islamic pictures. More than 150 protesters were confined on Monday, after they did not consent to end the protests. On Tuesday, Turkey’s Interior Minister Suleyman Soylu called the student protestors on Twitter as “LGBT deviants”, which has further only seemed to have enraged the demonstrators.

Following weeks of protests in the university, according to the BBC, in a video broadcast, Erdoğan made remarks against the LGBT movement happening in the country. He said to the members of his party, “We will carry our young people to the future, not as the LGBT youth, but as the youth that existed in our nation’s glorious past.” He continued, “You are not the LGBT youth, not the youth who commit acts of vandalism. On the contrary, you are the ones who repair broken hearts.” Even though homosexuality is legal in Turkey, the public sentiments towards homosexuals is still guarded.

The Guardian reported that, on Wednesday Erdoğan said that his government would not permit the Boğaziçi protests to get out of control, accusing the protestors of being “terrorists” and “LGBT youth” who are working against Turkey’s “national and spiritual values.” According to a report in The Middle East Eye, he also said that the demonstrations should not be allowed to spiral into the anti-government protests that were seen in 2013.

A fourth-year political science student –  Behrem Evlice, said that “We are so angry right now, and it’s not just Boğaziçi students, it’s students and young people all over Turkey. The state has attacked us with police and violence. They are smearing us with these labels when all we want is a say in how our university is run. Ultimately though there is an economic crisis in Turkey and they know they are going to lose votes… they are just trying to divide people.”

The handling of the issue of the Turkey protests has faced vast criticism especially from the UN, Us and the European Union. The UN’s Human Rights tweeted on Twitter saying that, “We call for prompt release of students & protestors arrested for participating in peaceful demonstrations, and urge the police to stop using excessive force. We condemn homophobic & transphobic comments by officials, inciting hatred & discrimination against LGBT people.”

But Turkey has instead gone ahead and defended the actions of its security forces via a statement which was issued on Thursday by the Foreign Ministry in which they have censured their foreign critics giving out a statements saying, that it is an internal matter, and that it is nobody’s limit to attempt to meddle with the state’s internal issues,

But what has the government’s response been like so far?

Allies of the government are safeguarding the appointment of Bulu by saying that the move has been taken to oppose elitism in higher education. But then again, the allies of the protests view the move as stifling scholarly freedom at an institution that has been known to protect the rights of every one of its students, according to a report in The Financial Times.

Erdoğan has been in power since over a decade now, and is seen as an Islamist and a conservative. Some media reports have linked the current students protests to what was seen back in 2013. 2013 protests in Turkey was seen as one of the biggest protest movements against Erdoğan, which began from a peaceful sit-in against the demolition of Gezi Park in central Istanbul but later grew into a demand that Erdoğan should resign after the police had cracked down on the protesters.

According to The Indian Express, crackdowns by the Turkish authorities are common since authorities are not lenient towards the public display of discontentment. In the early 2020, the Turkish prosecutors demanded the arrest of almost 700 individuals including military personnel and those working in the justice ministry among others as a component of a move against those who participated in the 2016 coup attempt to oust the government.

Since the unsuccessful coup took place, the Turkish authorities have been doing a crackdown on the alleged supporters of US-based Muslim priest – Fethullah Gülen, who Erdoğan has since quite a long ago accused for plotting the 2016 coup. Gülen has denied these allegations and has denounced the coup. In fact, he has previously recommended that the coup was “staged” by the government itself.

Even so, the Gülen’s supporters who are known as “Gülenists”, weren’t really enemies. It was not until Gülen left in 1999 for the US, and he began living in Pennsylvania in a self-imposed exile, they supported Erdoğan. But later the relationship did sour up after the Gülenists started to reveal the instances of corruption within the president’s circle. There have been four coups in Turkey since 1960, and all of them have been successful.

In the late 2020, the Turkish parliament passed a bill that would increase the checking of civil society groups. The demonstration is called “Preventing Financing of Proliferation of Weapons of Mass Destruction”, and was proposed by  Erdoğan’s party in order to agree with the UN Security Council’s recommendations to keep money laundering and dread financing in check.

On a large scale, the Bill gives the Turkish government the authority to appoint trustees to discontinue their activities, seize their assets and monitor their sources of funding.

According to The Indian Express report, critics saw particular provisions of the Bill as arbitrary, and accepted that it is an approach to crack down on dissidents in a country where civil society is as of now not exceptionally free. Likewise, some believe that it violates certain provisions under the Turkish Constitution since it interferes with the right to freedom of association.