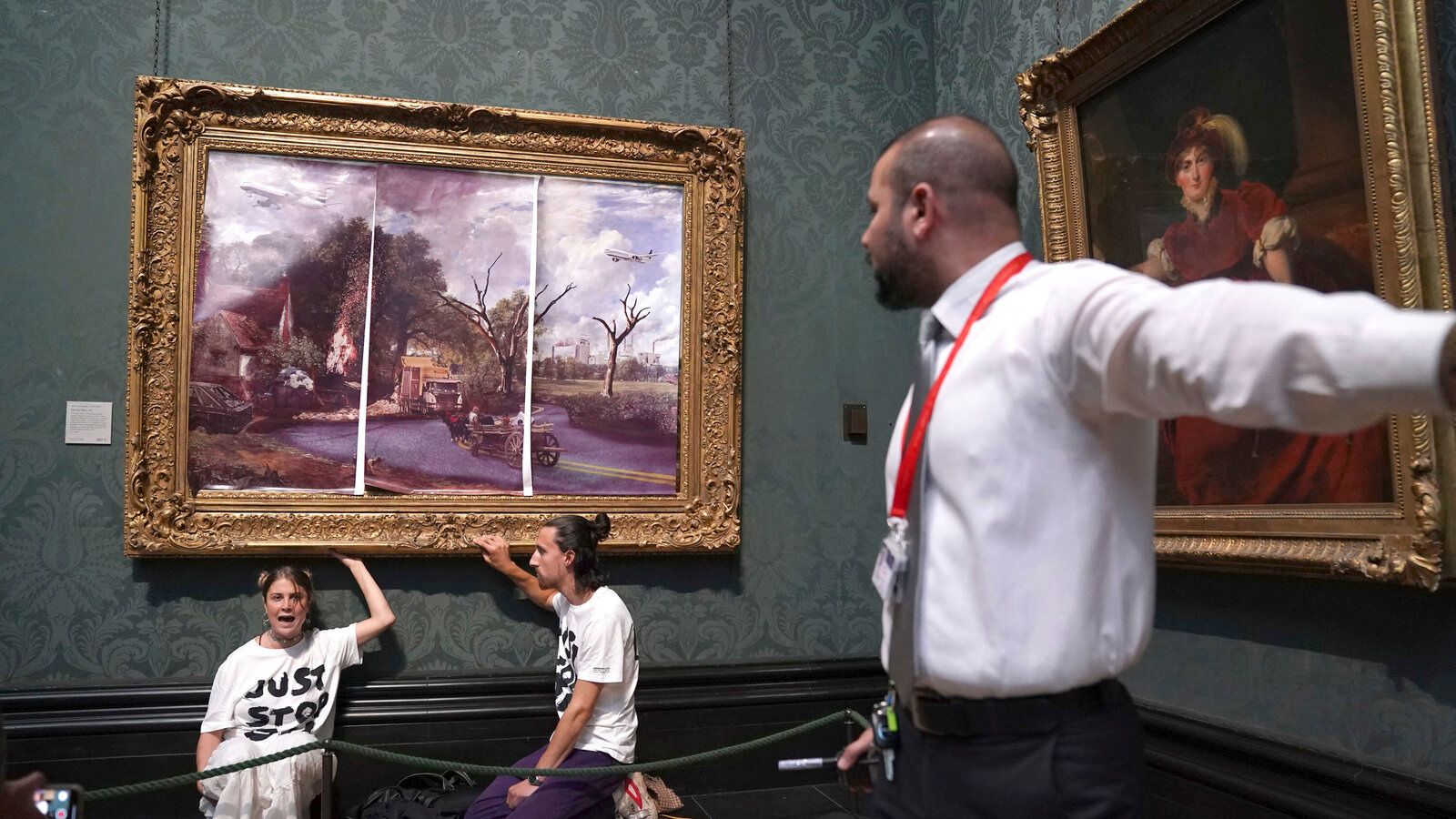 Police have arrested two climate change activists who threw mashed potatoes at a Claude Monet painting in a museum in Germany to protest fossil fuel production, a stunt which caused no damage to the art.

In a video, the two activists can be seen throwing the mashed potatoes all over Monet’s ‘Les Meules’ and then sitting under the painting to explain their act. The protesters – belonging to a German environmental group ‘Letzte Generation’ – justified their actions in the video. The German climate group Last Generation took credit for the stunt. The group posted video footage on Twitter showing a man and a woman tossing mashed potatoes at the painting, kneeling in front of it and gluing their hands to the wall.

The New York Times earlier stated: “Climate protesters across Europe have for months been gluing themselves to the frames of famous paintings in a series of attention-grabbing stunts.” It pointed out “In Britain, activists have attached themselves to about half-a-dozen masterpieces, including John Constable’s The Hay Wain. In Germany, protesters have stuck themselves to works, including Rubens’s Massacre of the Innocents, which hangs in the Alte Pinakothek in Munich. In Italy, works in the Uffizi, in Florence, and at the Vatican Museums have been targeted.”

The incident was the latest attack on famous artwork carried out by protesters calling for action on climate change. Earlier this month, activists from the campaign group Just Stop Oil were arrested after throwing tomato soup on Vincent Van Gogh’s “Sunflowers” painting in the National Gallery in London.

“We are in a climate catastrophe. And all you are afraid of is tomato soup or mashed potatoes on a painting,” the woman shouted in German while kneeling in front of Monet’s painting. “This painting is not going to be worth anything if we have to fight over food.”

Just Stop Oil said the activists threw two cans of tomato soup at Van Gogh’s oil painting, one of the Dutch artist’s most famous works. The two protesters also attached themselves to the gallery wall. Prosecutors said the oil painting, which was covered with a protective glass case, was not damaged by the two activists, but the frame was damaged.

Earlier this year in July, protesters in Italy glued themselves to a painting by Sandro Botticelli at a museum in Florence. They’ve done the same to a work by Picasso in Australia. 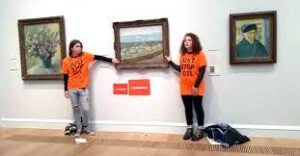 “We feel we have no choice, no choice but to take these actions,” Buss, who worked for energy giant Shell for 33 years, told Global News. He calls the attack against the painting an act of desperation but also “an act of love.”

In a statement, the Just Stop Oil group explained that they have been targeting art, as it is “part of our collective culture,” adding, “We love our history and culture too much to just allow it all to be destroyed.” Deutsche Welle quoted the Group saying: “Supporters of Just Stop Oil will continue to peacefully disrupt whatever it takes until the government agrees to halt all new fossil fuel projects.”

The Last Generation wrote in a statement on Twitter: “We make this #Monet the stage and the public the audience. If it takes a painting — with #MashedPotatoes or #TomatoSoup thrown at it — to make society remember that the fossil fuel course is killing us all: Then we’ll give you #MashedPotatoes on a painting!”

From another side, the protesters’ action  was harshly criticized by opponents who described the acts as vandalism rather than activism. Polina Lee, a critic of targeting museums by climate activists commented on the incident by saying that art is NOT an enemy of the environment! Destroying art, saying no to it is NOT going to solve poverty or save the planet. “I lived in poverty and art was my salvation, it gave me hope.” she insisted.