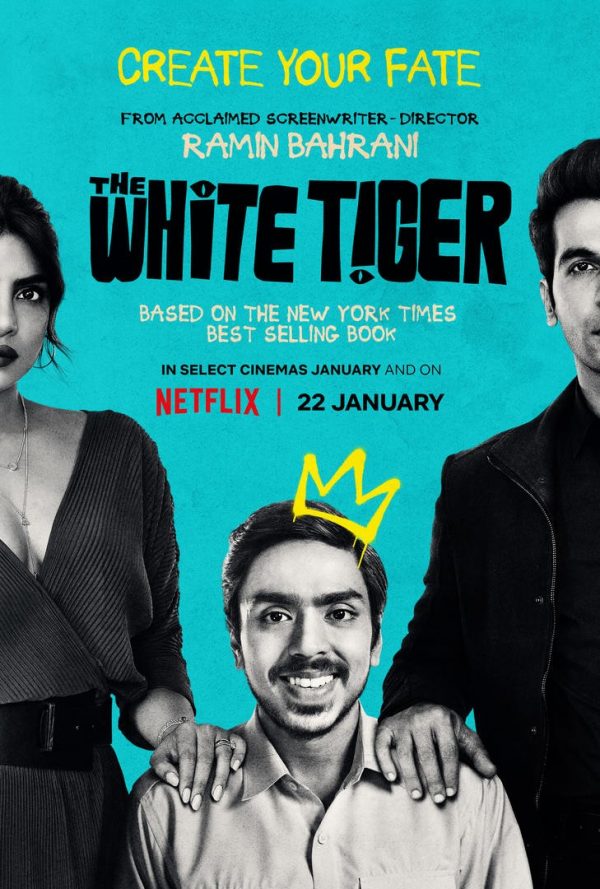 Disclaimer: I have not read the book; this is a movie review and not book v/s movie comparison.

The much-awaited film, The White Tiger, based on the Booker prize winning novel of the same name by Arvind Adiga is finally out on Netflix. It is directed by Ramin Bahrani and has a well decorated cast including Adarsh Gourav, Priyanka Chopra, Rajkummar Rao, Mahesh Manjrekar and Vijay Maurya among others.

The film is brilliantly directed and finely delivers what it had to say to the audience without much effort. The film revolves around the life of Balram Halwai played by Adarsh Gourav and his journey from being no one to calling himself the ‘White Tiger’ which is born only once in every generation or his escape to what he calls the ‘Rooster Coop’. In this journey, the film explores themes like class divide, master servant relationship, poverty, greed, ‘Indian’ mindset, the post liberalization era, stereotypes among others.

Adarsh Gourav steals the show with his performance, most times, as the scene ends, you feel like clapping for his portrayal of the struggling Balram Halwai who joins the wealthy landlord’s family as driver to his younger son. The roller coaster his life is and the way he treats himself amidst all of this from being a naïve driver, he ends up doing so much with his life that he himself would not have expected; how he deals with his problems, how he discovers his vices are some amazing things that this character provides us with.

Other characters are mostly named after animals like ‘the stork’ or ‘the mongoose’ since the whole movie is characterized with the metaphor of the ‘jungle’. Ashok played by Rajkummar Rao, is an America returned, wannabe entrepreneur appears a bit caricaturist with his lingo but Pinky played by Priyanka Chopra finely blends into the role of an NRI for obvious reasons.

The most explored theme in the film is one, the, class divide between the upper class and lower class, which explores almost all aspects, from their abode, to their lifestyle and even to their mannerisms which reminded me of Bong Joon ho directed Korean film, Parasite. While Balram’s masters live in tall towers and big bungalows, all Balram has to live is a small room where insects crawl even on his mosquito net.
On the flipside, the film also shows how this upper class is being screwed over by the ruling class, particularly the current CM who is referred to as the ‘Great Socialist’ in the film who demands bribe in return for the evasion of taxes that Balram’s masters have to pay. She had me in one scene which is also her most prominent one among two or three in the film.

Two, the master servant relationship has been well explored from various angles, one, where initially Balram feels it is his born duty to be a slave and serve his masters, which later evolves as his greed, need and wants multiply, then you have the family which on one side treats slaves worse than an abiotic component and on the other we have Pinky and Ashok treating the slaves as tantamount.

Well, with spectacular cinematography and a compelling narrative which is of Balram writing a mail to the Chinese Premier (watch the movie to know why), this film definitely does the job for me by delivering meaningful and entertaining 125 minutes.

This line will stay with you, “there are two types of castes, men with big bellies, men with small bellies”.
In the movie, Balram goes from small belly to a big belly.

Union Budget 2021: Work From Home might leave you Richer