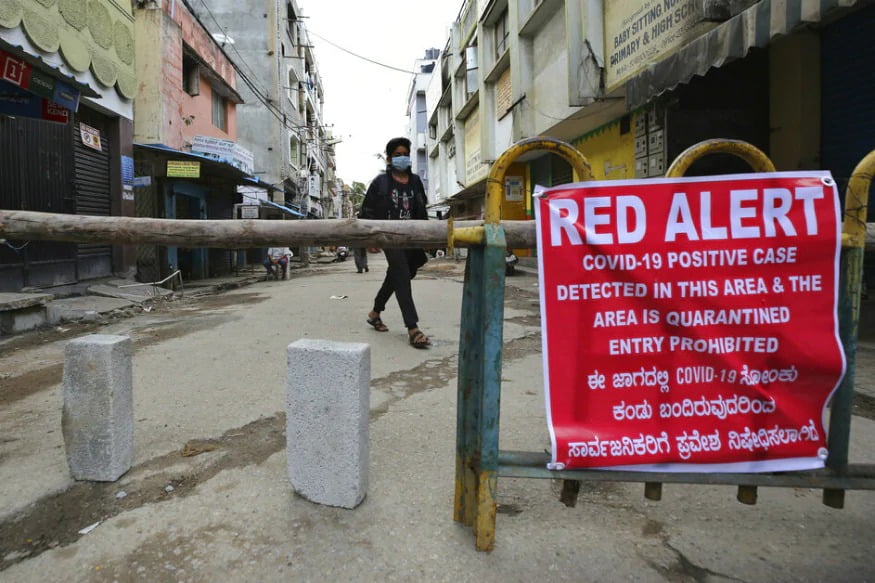 For the first time in four months, Karnataka state reported more than 2,000 Corona positive cases yesterday. The total number of cases in the state rose to 28,877 which included 11,876 discharges. 2,026 cases were reported yesterday while 778 people were discharged. With 3,181 containment zones, Bengaluru is responsible for 55.67% of these cases as the city reported 1148 new cases and 22 deaths as per the COVID – 19 bulletin released by BBMP war room.

The growth rate of positive cases in Bengaluru is alarming. The first positive case was registered in the city on March 8th and by June 6th there were only 162 active cases. With the tracing, tracking, testing, treating strategy, the state capital was doing very well. Instead of politicians making the rules, the health department took suggestions from medical experts and were thus able to contain the spread of the virus as much as possible.

BBMP came up with the concept of war rooms where healthy volunteers worked as information agents. They solved people’s confusion while giving them appropriate information. IAS officer Manish Moudgil and his team came up with a bunch of apps like contact tracing, quarantine watch, health watch app etc. to keep the control in check and to ensure proper health care facilities for the affected. Quarantine rules were promptly maintained and hotspots were sealed down. Bengaluru City Police also did an incredible job during the lockdown.

Between June 1– 26, the city recorded an increase of 402% in cases. The actual surge was witnessed in the 24 hours between June 26&27th as the city saw an increase of 313.9 % increase as the fresh cases jumped to 596 from 144. From 27th we are witnessing 24 hour record spikes on most of the days.  The city’s growth rate is now higher than other metro cities and the recovery rate is at a mere 14.7%. If this trend continues, it is not looking very good for Bengaluru.

So, what went wrong for Bengaluru? Several factors including Unlock 1.0, increased testing, the change in weather, possible spread in communities and an accounting error by the officials, yes you read that right.  According to BBMP Commissioner Anil Kumar, an accounting error where the officials had failed to provide the details of some positive cases, 1200 cases had to be added in batches between 26-30th June which was one of the contributors to the spike. The commissioner also agreed that this alone was not the reason for the spike.

The hard work of the BCP during the lockdown phase almost immediately went in vain as the city returned to normalcy in Unlock 1.0. Traffic jams were frequent, influx of travellers increased, public spaces like restaurants and malls were also opened two weeks ago. Proper social distancing norms weren’t followed inn these establishments.

As always, the city’s ever changing weather led to a rise in cases of influenza and other respiratory disorders. June to November is usually the flu season in Bengaluru. Number of dengue, H1N1 cases had also spiked during these months in the previous years and this time along with these, it is COVID too this time. Another problem is of the identification of the source of infection. Almost 61% of the cases have unknown sources and has become a big worry for the city. The government denies the chances of public transmission, but experts think that is the start of the peaking season and the city is in the first stages of community transmission.

If the opposition is to be believed the ego clashes inside the ruling party is also one of the reasons for the mismanagement of the disease in the city. There is no coordination between Health and Education Minister B. Sriramulu and medical education minister Dr K Sudhakar. They were both very vocal on regional news channels about how certain decisions were made without consulting the other. Both these ministers were accused of violating social distancing norms and Sudhakar had to be under home quarantine after his family members tested positive. Deputy CM R. Ashoka is the COVID spokesperson now for the Karnataka government.

If experts’ reports are to be believed the spike might continue for two more months with regular drops and spikes in the curve. Along with the surge, the city is also facing other problems like shortage of beds and doctors, delay in the arrival time of ambulances, difficulties in cremation of the dead patients and the spread of the disease among the city’s police force.

An all ministers meeting headed by CM Yediyurappa was held today evening and the CM has now acknowledged that the situation is some districts of the state is quite alarming. There is still no confirmation about the lockdown. There are speculations that a partial/half lockdown might be reinstated in the whole state. In the meantime, please stay indoors unless it is absolutely necessary to go out and when you are outdoors, wear masks and strictly follow social distancing norms.

THE ARREST OF VIKAS DUBEY AND THE DEFECTS WITHIN THE SYSTEM