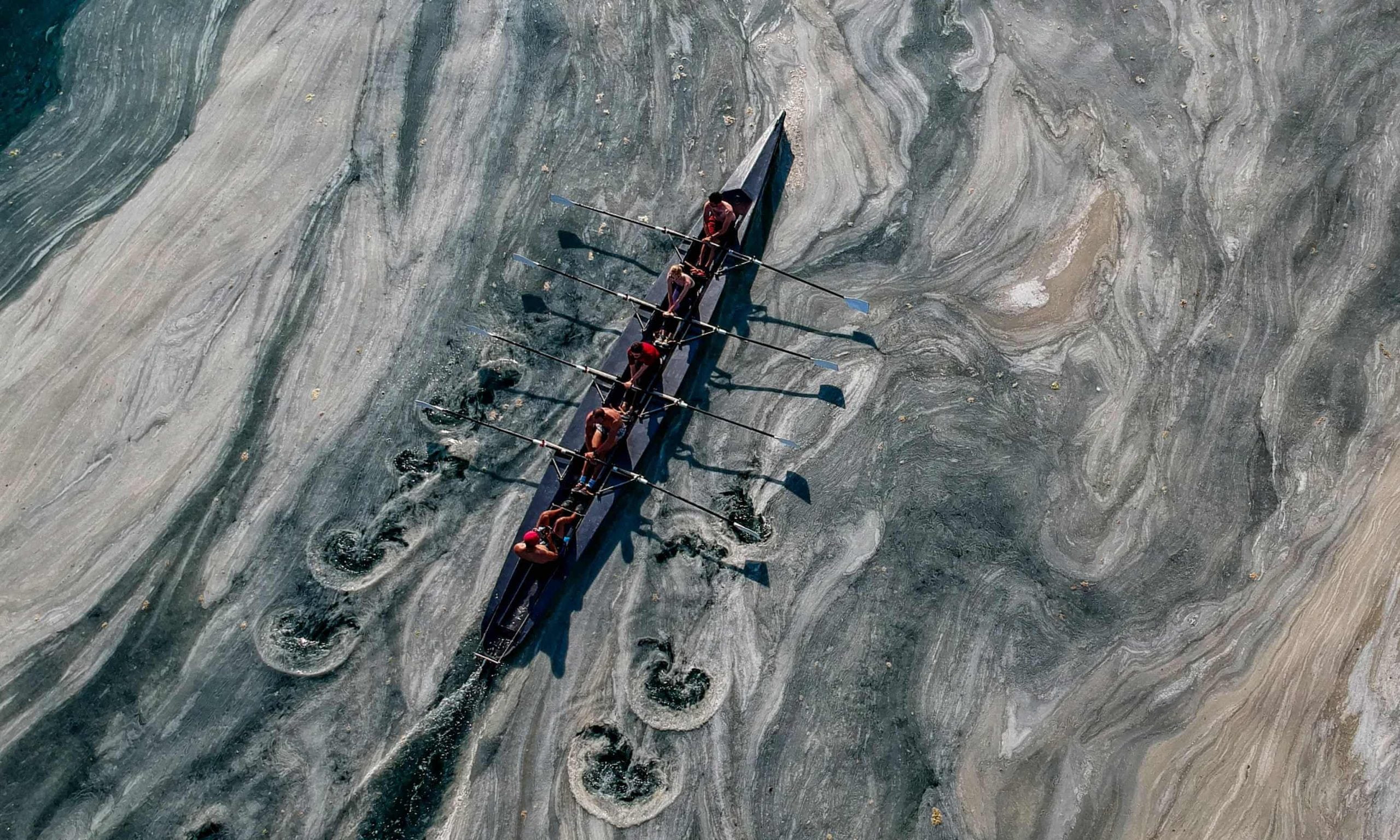 Sea snot outbreak is as terrible as it sounds and it is severely affecting the aquatic species in the sea of Marmara. But what is it?

A thick layer of sea snot is spreading south of Istanbul in Turkey’s Sea of Marmara. The sludge has also been spotted in the adjoining Black and Aegean seas.

From the top view, it appears as if a swath of beige has been swept over the dark blue waters of the Sea of Marmara. On closer inspection, it looks like a creamy, gelatinous blanket of sand and scientists are now warning that as a result of global warming, the substance known as sea snot is on the rise.

However, sea snot is also described as “marine mucilage,” and it has its own eco-system. This slimy substance also changes its color from off-white to brown. Sea snot has a horrible odor and slimes anything it comes into contact with. In addition to deterring swimming, scientists have discovered that the sludge may be a nuisance for corals.

In addition to that, European photo-journalist Erdem Sahin shared aerial pictures of the outbreak

Let’s take a closer look at the sea snot outbreak.

How Sea snot spurred into a dangerous outbreak

Did you know? Istanbul is the largest city in Turkey and it is situated on the Marmara Sea’s coast and has a population of approximately 16 million people. Near the coast are five more provinces, companies, and industrial hubs.

Between the Black Sea and the Aegean Sea is the Sea of Marmara. It separates Turkey’s European and Asian borders and is also known as an inland sea.

Sea snot forms as a result of prolonged warm temperatures and calm weather and in areas with abundant nutrients in the water.

Furthermore, when nutrients including nitrogen and phosphorus are abundant in saltwater, the algae phytoplankton that causes the problem blooms out of control.

These tiny floating sea plants are responsible for breathing oxygen into the oceans, but the abundance of these sea plants creates a reverse effect. In light of certain circumstances, they exude a mucus-like substance and that under the appropriate conditions may cover many square miles of the ocean.

After the mucilage covers the coastline, the interaction between water and the atmosphere is hindered. But the substance itself is usually not dangerous. Protein, carbohydrates, and fat make up the majority of what we see. However, the sticky material attracts viruses and bacteria, including E Coli, and may effectively smother marine life.

The most worrisome aspect is when they transform from discrete and minute clumps to enormous clumps which are apparent to the human eye, and it is also pretty visible in the above pictures. In fact, the algae-generated mucus is gel-like, marine may be especially prone to forming marine-mucilage blobs. In rare cases, and if seas are consistently calm, mucilage can become very large and persist for months, allowing disease-causing bacteria to accumulate within the blobs.

This outbreak is believed to be the biggest in history and is causing havoc for local communities.

This isn’t a new phenomenon either, the sea snot outbreak, it seems, has come and gone. The first naturally occurring mucilage was first documented in Turkey in the year 2007, but however, this is the largest outbreak on record.

According to experts, climate change and pollution have contributed to the spread of the substance, which comprises a varied spectrum of microbes that flourish when nutrient-rich sewage is dumped into seawater.

Scientists are urging immediate action to minimize wastewater pressures in the Sea of Marmara in order to diminish the sea snot.

If no appropriate measures are taken, it is possible that it may eventually destroy all aquatic creatures, including fish, crabs, oysters, mussels, and sea stars.

Besides that, the ‘sea snot’ outbreak has disrupted the livelihoods of several fishermen. According to them, the sludge collects in their nets, making the net so heavy that they break or even go lost in the ocean. Furthermore, the mucilage on the threads makes the nets visible to fish, deterring them from approaching.

The loss of revenue for fishermen is exacerbated by Turkey’s economic crisis: a fishing net weight used to cost 15 Turkish lira (127 rupees) but now costs 22 lira (186 rupees). Because of the constant decline in the value of the currency, the cost of even basic boat maintenance has quadrupled in the previous year.

Some scientists have also expressed concern that the ‘sea snot’ might lead to an outbreak of water-borne diseases including cholera in cities like Istanbul.

Even with the heightened effects of climate change, the semi-enclosed Sea of Marmara could hardly withstand the strain of the densely populated and industrialized Marmara basin. When the temperature rises, nevertheless, the water reacts in a completely new direction.

Other research teams have investigated the impact of sea snot on mussels, crabs, and other sediment-dwelling organisms.

This outbreak serves as a harsh warning to the rest of the world, providing a sneak peek into what may happen if people continue to push the planet’s life support systems to the edge.