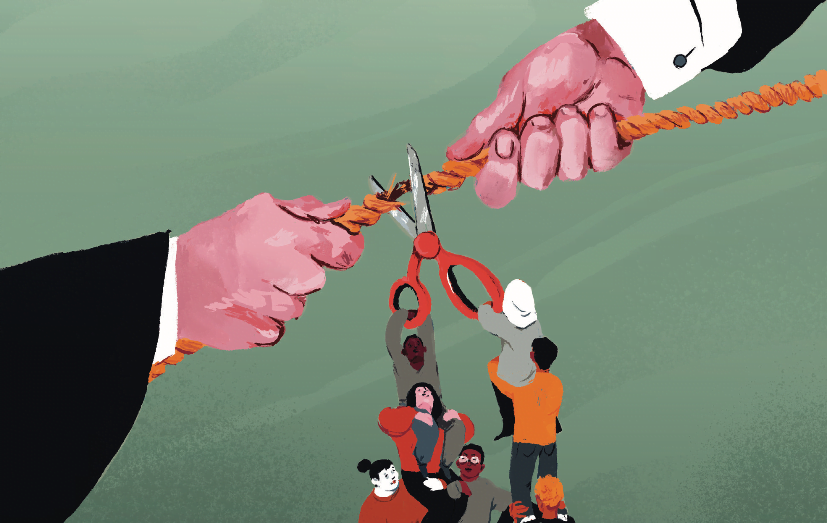 Many are familiar with the phrase of Abraham Lincoln, democracy is a government  “of the people, by the people, and for the people.”,  but the dictionary definition states democracy “is government by the people in which the supreme power is vested in the people and exercised directly by them or by their elected agents under a free electoral system”

Freedom and democracy are often used interchangeably, but the two are not synonymous. Democracy is indeed a set of ideas and principles about freedom, but it also consists of a set of practices and procedures that have been molded through a long, often tortuous history. In short, democracy is the institutionalization of freedom. For this reason, it is possible to identify the time-tested fundamentals of constitutional government, human rights, and equality before the law that any society must possess to be properly called democratic.

THE PILLARS OF DEMOCRACY

A Nation/Government that can lay out all these pillars could be considered as a Real or even an Ideal democracy. A democracy could either be Director Representative. In a Direct Democracy which is considered as Pure Democracy, all citizens, without the intermediary of elected or appointed officials, can participate in making public decisions, which is only practical with a relatively small population where all citizens can meet under a single roof to discuss issues and arrive at decisions by consensus or majority vote. Ancient Athens, the world’s first democracy, managed to practice direct democracy with an assembly that may have numbered as many as 5,000 to 6,000 persons–perhaps the maximum number that can physically gather in one place and practice direct democracy. Modern society, with its size and complexity, offers few opportunities for direct democracy, most communities have grown too large for all the residents to gather in a single location and vote directly on issues that affect their lives.

Governing over the Crow Indian Reservation in Montana, the Crow General Council has been the legally recognized government of the tribe since 1948. The General Council is formed out of all voting-age members of the Tribe. Council members meet biannually to nominate members to various sub-councils.

In 2016, the Danish parliament passed a law that created an online citizens’ initiative system whereby eligible voters can propose bills. Proposals that gain the support of 50000 voters within 180 days are referred to Parliament for debate.

Today, the most common form of democracy, whether for a town of 50,000 or nations of 50 million, is a Representative Democracy, in which citizens elect officials to make political decisions, formulate laws, and administer programs for the public good. In the name of the people, such officials can deliberate on complex public issues thoughtfully and systematically that require an investment of time and energy that is often impractical for the vast majority of private citizens.

How such officials are elected can vary enormously. On the national level, for example, legislators can be chosen from districts that each elect a single representative. Alternatively, under a system of proportional representation, each political party is represented in the legislature according to its percentage of the total vote nationwide. Provincial and local elections can mirror these national models, or choose their representatives more informally through group consensus instead of elections. Whatever the method used, public officials in a representative democracy hold office in the name of the people and remain accountable to the people for their actions. All democracies are systems in which citizens freely make political decisions by majority rule. But rule by the majority is not necessarily democratic: No one, for example, would call a system fair or just that permitted 51 percent of the population to oppress the remaining 49 percent in the name of the majority. In a democratic society, majority rule must be coupled with guarantees of individual human rights that, in turn, serve to protect the rights of minorities–whether ethnic, religious, or political, or simply the losers in the debate over a piece of controversial legislation. The rights of minorities do not depend upon the goodwill of the majority and cannot be eliminated by a majority vote. The rights of minorities are protected because democratic laws and institutions protect the rights of all citizens.

Diane Ravitch, scholar, author, and a former assistant U.S. secretary of education, wrote “When a representative democracy operates in accordance with a constitution that limits the powers of the government and guarantees fundamental rights to all citizens, this form of government is a constitutional democracy. In such a society, the majority rules, and the rights of minorities are protected by law and through the institutionalization of law.”

These elements define the fundamental elements of all modern democracies, no matter how varied in history, culture, and economy.  In a democracy, the government is only one element coexisting in a social fabric of many and varied institutions, political parties, organizations, and associations. This diversity is called Pluralism, and it assumes that the many organized groups and institutions in a democratic society do not depend upon government for their existence, legitimacy, or authority. Thousands of private organizations operate in a democratic society, some local, some national. Many of them serve a mediating role between individuals and the complex social and governmental institutions of which they are a part, filling roles not given to the government and offering individuals opportunities to exercise their rights and responsibilities as citizens of a democracy.

These groups represent the interests of their members in a variety of ways–by supporting candidates for public office, debating issues, and trying to influence policy decisions. Through such groups, individuals have an avenue for meaningful participation both in government and in their own communities. The examples are many and varied: charitable organizations and churches, environmental and neighborhood groups, business associations, and labor unions.

The forces that threaten democracy are constantly at work; they are embodied in the nature and process of our economic system. These threats can come not only from corrupt and greedy people but from the political and economic institutions themselves. Structural weaknesses can undermine democracy regardless of whether the leaders are good or bad. Real democracy recognizes the fundamental threats of the systems of privilege — white, caste/class, and corporate privilege.”

In an authoritarian society, virtually all such organizations would be controlled, licensed, watched, or otherwise accountable to the government. In a democracy, the powers of the government are, by law, clearly defined and sharply limited. As a result, private organizations are free of government control; on the contrary, many of them lobby the government and seek to hold it accountable for its actions. Other groups, concerned with the arts, the practice of religious faith, scholarly research, or other interests, may choose to have little or no contact with the government at all.

In today’s times, the key areas on which the nature of democracy is determined are Rule of Law, Electoral process and pluralism, Functioning of Government, Civil liberties, Economic freedom and Press Freedom. The global index compiled by the Economist Intelligence Unit (EIU), the research division of the Economist Group, is released periodically (mostly annually) to measure the state of democracy in all the countries by considering 60 indicators grouped in five different categories, measuring Pluralism, civil liberties and political culture. In addition to a numeric score and a ranking, the index categorises each country into one of four regime types: Full Democracies, Flawed Democracies, Hybrid Regimes and Authoritarian Regimes.

These nations have only limited problems in democratic functioning. Norway, Iceland, Sweden, New Zealand, Canada, Finland, Denmark, Ireland, Netherlands, and Australia. A further 13 nations, along with the first ten comprised the complete list of 23 full democracies.

This index shows us how effective, transparent and beneficial full democracies are!

India, South Africa, Jamaica, Namibia, Israel, USA are some countries in the list of 53 Flawed Democracies. Here let’s consider India, the world’s largest democracy, to understand where we stand in global indexes from   2019 and 2020 related to democracy. India is a flawed democracy with a score of 6.61, standing 53rd out of 167 countries on the 2020 Global Democracy index by The Economist Intelligence Unit. 2019 Human Development Index, ranked India 131st out of 189 countries, Press Freedom Index 2021, ranked 142nd out of 179 countries, Rule of Law Index 2020, ranked 69th out of 128. Transparency International: Corruption Perceptions Index 2020, ranked 86 out of 180, Electoral process and pluralism: score 8.67, Functioning of government: score 6.79, Civil liberties: score 6.76, Political participation 6.67, Political culture 5.63, The Wall Street Journal and the Heritage Foundation: Index of Economic Freedom 2021, ranked 121 out of 178 Countries.

Pakistan, Bangladesh, Bhutan, Nepal, Kenya are some countries in the list of 35 Hybrid Regimes. Taking Pakistan, Our neighboring Country, It is considered a Hybrid Regime with a score of 4.31, standing 105th out of 167 countries on the 2020 Global Democracy index by The Economist Intelligence Unit. 2019 Human Development Index, ranked Pakistan 154th out of 189 countries, Press Freedom Index 2021, ranked 145th out of 179 countries, Rule of Law Index 2020, ranked 120th out of 128. Transparency International: Corruption Perceptions Index 2020, ranked 124 out of 180, Electoral process and pluralism: score 6.08, Functioning of government: score 5.71, Civil liberties: score 4.71, Political participation 2.22, Political culture 2.50, The Wall Street Journal and the Heritage Foundation: Index of Economic Freedom 2021, ranked 152 out of 178 Countries.

China, Afghanistan, North Korea, Iran, Iraq, Palestine are some countries in the list of 57 Authoritarian Regimes. Consider North Korea, it is considered an Authoritarian Regime with a score of1.08, standing 167th out of 167 countries on the 2020 Global Democracy index by The Economist Intelligence Unit. 2019 Human Development index doesn’t include North Korea, Press Freedom Index 2021, ranked 179th out of 179 countries, Rule of Law Index 2020, doesn’t include North Korea, Transparency International: Corruption Perceptions Index 2020, ranked 170 out of 178 Countries. The Wall Street Journal and the Heritage Foundation: Index of Economic Freedom 2021, ranked 178 out of 178 Countries.

The numbers speak! Real democracy is a perpetually evolving system, where the people have relatively equal access to economic and political power. (Tim Kipp)

The Wall Street Journal and the Heritage Foundation: Index of Economic Freedom 2021

Withdrawal of US troops: Afghan civilians take up arms against Taliban