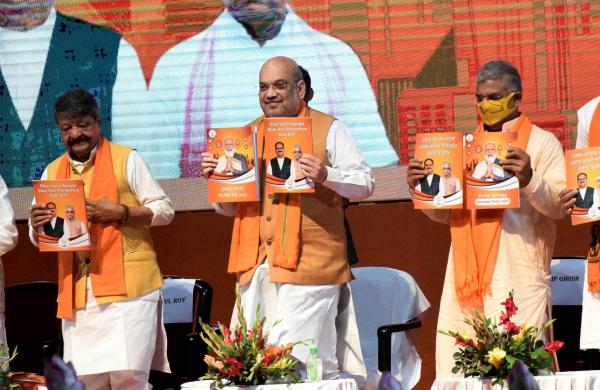 The Bharatiya Janata Party has announced its manifesto, ahead of West Bengal Assembly polls, in Kolkata, on March 21.

62-page document, the BJP manifesto has the slogan “Sonar Bangla”. In the manifesto, the party has promised to implement CAA in the first cabinet meeting after winning the elections and coming to power. Also it states, allocation of ₹18,000 pending to 75 lakh farmers under the PM Kisan Samman Nidhi.

Mr. Shah promised the implementation of the CAA in the first Cabinet meeting of the BJP government in West Bengal. “By implementing the CAA, the BJP (government) will complete the task of giving citizenship to all of them (non-Muslim refugees from neighboring countries),” Shah said.

The BJP had promised its implementation in the 2019 Lok Sabha polls too after the Bill was passed in Parliament. During the run up to the campaign, the BJP leadership including Mr. Shah have maintained that the rules for the CAA are being framed and the Act will be implemented after the vaccination for COVID-19 is completed.

“The refugees who have come to the State as early as 70 years ago are still awaiting their rights. We will implement CAA in the first Cabinet of the BJP government. Under the CM Refugee Welfare scheme, ₹10,000 will be given to each of the refugee families for the next five years,” Mr. Shah said.

Mr. Shah also promised the implementation of Ayushman Bharat in the first Cabinet meet. He said the BJP government will ensure that there is zero infiltration and promised fencing of the border.

The BJP also promised ₹6,000 per annum for fishermen. The manifesto also promised Annapurna Canteens where subsided cooked meals at ₹5 a day will be served thrice a day. A similar announcement of “Maa canteens” was made by the Trinamool Congress.

In reaction to this, The TMC said the manifesto was released in Hindi and not Bengali. “For the first time ever, a non-Bengali has released a manifesto meant for Bengal because @BJP4Bengal did not have a single ‘son of the soil’ to do the same. Bengal will never forget this insult. #BengalRejectsGujaratiManifesto,” it tweeted from its official handle.

“Polarization is their politics. There is almost no economic programme, only polarization. They have announced an honorarium for priests but our government already offers Rs 1,000 a month to them. They are trying to present it in such a way that polarization takes place,” said Trinamool spokesperson and MP Saugata Roy.

Trinamool has said that most of these announcements are tweaks of the party’s pledges. “The BJP is following our lead and imitating us. Most of the programmes they announced are already in implementation in Bengal,” Roy said.

One key difference does exist between the BJP and Trinamool manifestos. Mamata has promised a Universal Basic Income scheme for the women heads of 1.6 crore families.

Water Day: Soul of the Earth