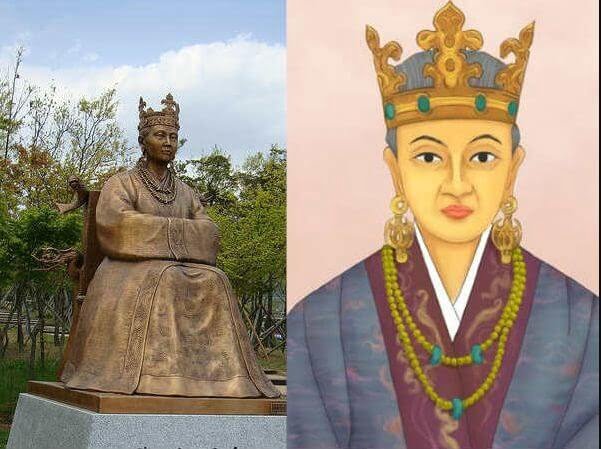 Who is Princess Suriratna? Is she a character conjured up by the power of imagination and then passed down through the centuries or is she an actual historical figure rooted in reality belonging to a time period and place so ancient that human memory has failed to preserve her as fact? The story of an Indian-Korean princess travelling from Ayodhya to Korea because her father received a divine vision that prophesied his daughter’s marriage to the Korean king Kim Su-Ro of Geumgwan Gaya is one that is interesting one because the story currently serves as a way of furthering India’s ties with Korea. Whether the story of Queen Suriratna is rooted in reality or nourished by generations of folklore being passed on from generation to generation is yet to be proven. However, it is interesting to note that the legend of Queen Suriratna or Heo Hwang Ok has served as link binding India and Korea in many aspects.

Legend has it that Queen Suriratna or Heo Hwang Ok married Korean King Kim Su-Ro and started the Karak dynasty from which about 10 percent of Koreans trace their ancestry. According to the legend, the king of Ayodhya had a dream in which God ordered him to send his daughter across the oceans to marry the Korean King Kim Su-Ro. The story is written in the popular south Korean book containing fables and legends called the Samguk Yusa (Memorabilia of the Three Kingdoms). The book mentions the kingdom Ayuta as the birthplace of the princess. Some anthropologists argue that Ayuta and Ayodhya have many phonetic similarities and hence, are the same place. The legend goes that Queen Suriratna and King Kim Su-Ro had 10 children and ruled for 150 years and established the Karat Dynasty.

As far as Korean storytelling goes, it is believed among people that the princess came from a far off southern land from across the sea. Her ancestors also preserve the rocks that were used to keep her boat stable. The tombs of King Kim Su-Ro and Queen Suriratna are located in the South Korean city of Guam and are a tourist attraction.

Kim is a common surname in South Korea and approximately 6 million Koreans trace their ancestry from the fabled queen Suriratna. Although the legend says that Heo Hwang Ok gave two of her children her own surname “Heo” so as to preserve her legacy. Heo is also a fairly common surname in Korea.

Although there are no records from India that prove that the princess actually existed, she is mentioned in a Korean book called Samguk Yusa (Memorabilia of the Three Kingdoms). The book mentions that she hails from a far off southern kingdom from across the ocean called Ayutha. Although Ayutha is mostly associated with Ayodhya in northern India, there are also theories that the kingdom of Ayutha actually refers to Ayutha (Tamil) Nadu or the Ayuttha kingdom in Thailand (although the latter was established much later in 1350 CE)

This is not the first instance of myths and legends talking about Indian princes travelling across lands to marry or conquer or start a dynasty. Many Tibetans trace their ancestry to Princess Rupavati from the Kaurava kingdom. Although there are no official records she is believed to have existed by millions of Koreans today and the tombs of King Kim Su-Ro and Queen Suriratna are located in the South Korean city of Guam and attract tourists from all over the world.

Whether Queen Suriratna was a real historical figure or a figment of someone’s imagination sustained through generations of storytelling, it is worth noting that for many people she represents a bridge to a culture that they have never been intimately familiar with. The Kingdom of Ayodhya, the myth of the divine prophecy that led her to travel across the ocean to Korea, and the legend of queen Suriratna is something that is not only a part of stories and myths but is a part of a lot of the cultural identity for many Koreans.

The story that connects India and Korea is an interesting one and that has been used to further Indo-Korean ties. In the year 2000, South korea and India signed an agreement to develop Ayodhya and Gimhae as sister cities. In 2001, a memorial for Queen Heo Hwang Ok was unveiled on the banks of river Saryu and in 2018, South Korean first lady Kim-Jung Sook visited the memorial for a ceremony to upgrade the existing memorial. As expert Kim Do Young said “Whether it is history or legend – based on it – mental or spiritual gap [between the people] is reduced and a common cultural ground is made”

Every year, thousands of Korean tourists come to pay respects to their ancient queen and her motherland. Perhaps, the power of stories, myths and legends to bring two cultures and countries together is often underestimated.