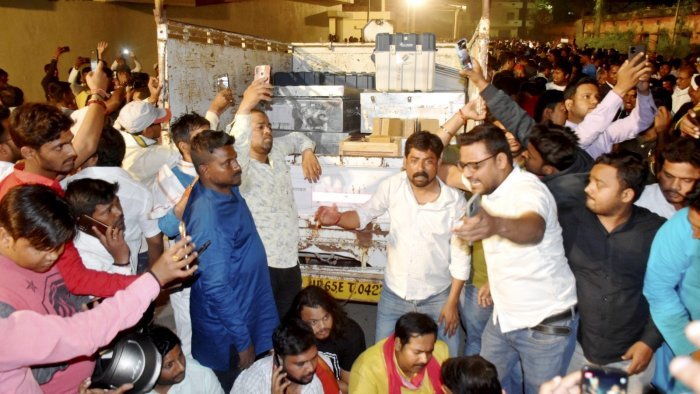 A day after Akhilesh Yadav made a bombshell accusation that Electronic Voting Machines or EVMs were illegally transferred in Uttar Pradesh’s Varanasi, barely 48 hours before the much anticipated state polls, his party released an on-camera statement from an official on Twitter, admitting that there were “lapses.”

While speaking to reporters on Wednesday evening, Varanasi Commissioner Deepak Agarwal acknowledged that there was a lapse in protocol in the transportation of EVMs. He emphasised, however, that the voting machines in question were used for training purposes only.

“If you talk about the protocol for the movement of EVMs, there was a lapse in the protocol, I accept that. But I can guarantee you, it is impossible to take away machines used in voting,” Mr Agarwal said. He said that there was no intention of wrongdoing as there were CCTV cameras, security guards and representatives from various political parties at the centres. “Political party workers can even sit outside the centres to keep an eye,” the Commissioner offered.

Akhilesh Yadav accused the governing BJP of attempting to “steal” the elections on Tuesday, alleging that EVMs were transported out of a counting centre in three trucks. The Samajwadi Party president claimed that he had video footage of the incident and said his party workers had intercepted one of the lorries in Varanasi.

Mr Yadav said, “In Varanasi, we caught one truck with EVMs and two others fled. If the government is not trying to steal votes, then it should at least explain why there was no security while moving EVMs,”.

He further said that officials were given orders to hold down the counting of ballots in areas where the BJP candidate’s prospects of winning were weaker. Mr Yadav alleged that the orders were explicitly provided for 47 seats where the BJP’s margin of victory in the 2017 election was fewer than 5,000 votes.

As ballots are tallied and counted on Thursday, results for Uttar Pradesh and four other states will be released after a month-long election.

Uttar Pradesh is currently India’s most politically important state. Exit polls in Uttar Pradesh forecast a landslide victory for the BJP. The primary rival to the BJP in this election, Akhilesh Yadav, is expected to come second.