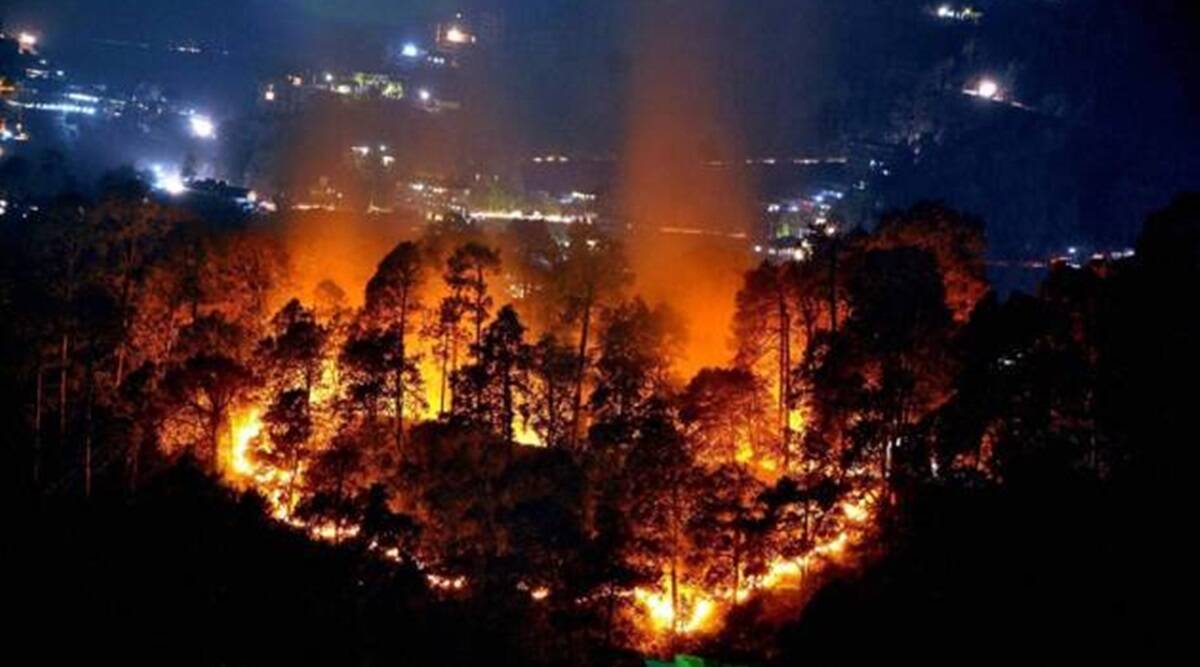 Forest fire generally rises at its peak between May and June. However, the scenario has changed a bit this year. Uttarakhand has started witnessing forest fire this year right from the winter months. This does not happens likely but this time the forest fire is causing much devastation all across the green belt of the state.

Uttarakhand is witnessing unprecedented forest fires, that too in April when temperatures are yet to touch the maximum range, forest officials said. Higher temperatures generally trigger such fires. Most hill districts like Nainital, Almora, Tehri and Pauri have come under the grip of raging forest fires.

Compared to 172 hectares last year, over 1290 hectares of forest land got affected by forest fires this year. The state has reported over 39 new forest fire incidents in the last 48 hours, taking the number of such incidents this year to 983. Also, four human deaths and seven animal fatalities have been reported so far due to these forest fires.

According to forest officials, apart from less rain in the winter months, due to the fear of epidemic and the lockdown, movement in the forests was restricted. Due to this, a lot of combustible material, mostly pine needles, got accumulated on the forest floor. These materials are cleared every year during control burning but it was affected over the past year, which is one of the reasons for the spike in forest fires.

State Congress president Pritam Singh also questioned the government’s “inaction” against forest fires and said, “State’s precious forests are burning down in these forest fires but the government is not looking at it. The state forest minister is nowhere to be seen in the picture when he should come forward to save our forest from this disaster which is now affecting people and their properties.”

Maan Singh, chief conservationist of forest (fire and disaster management) said, “Forest fires have increased in the last one week because of strong winds and no rainfall. It is also due to the rise in temperature with less rainfall and snowfall during the winters.”

Forty active fire spots in the forests of Uttarakhand have sent the alarm bells ringing for the state authorities. The districts of Nainital, Almora, Tehri and Pauri are the worst-hit and the state government is trying everything it can to bring the situation under control. The fire broke out at 964 locations, state government officials told news agency PTI.

Assuring all help possible to state, the Centre on Sunday rushed two helicopters to Uttarakhand to bring the blaze under control. Chief minister Tirath Singh Rawat called an emergency meeting with the state officials to assess the state’s preparations and ways to effectively act on the forest fires.

Union Home Minister Amit Shah on Sunday said the government has ordered the deployment of National Disaster Response Force (NDRF) teams and helicopters in Uttarakhand to tackle forest fires in the state.

According to reports, the fire has so far destroyed property worth Rs 37 lakh and claimed the lives of at least seven animals. As per the state government, the fire has spread in forests of Garhwal and Kumaon regions. The worst-affected districts are Nainital, Almora, Tehri and Pauri.

Forest fires are a regular occurrence in Uttarakhand at this time of the year. They are usually caused by dry leaves fallen from tress during the season. However, this may be the worst fire since 2016.

The reason for such frequent and massive fires could be Covid-19. Annually, the state government undertakes a series of measures to tame forest fires like raking of dry leaves and creating fire barriers. However, due to Covid-19 pandemic-induced lockdown, most of these activities could not be carried out.

Usually, the fire do not get this severe as the rains, expected at this time of the year in the region, douse the fire or wet the leaves before they catch fire. However, this year the deficient rain has left the leaves dry. The firefighters are currently battling with dry leaves and sticks collected over the period of one and a half year, making the challenge difficult.