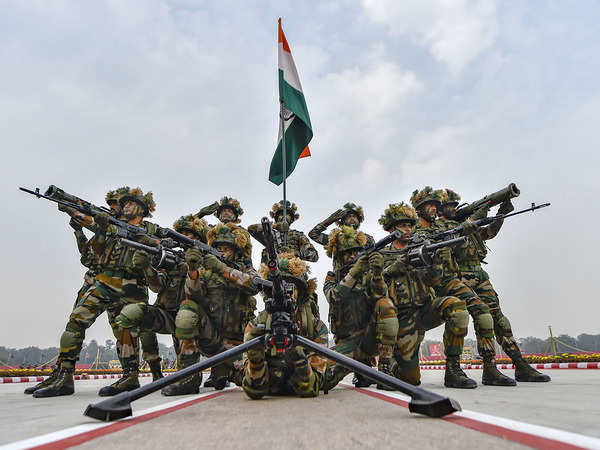 Army Day is celebrated every year on 15th January, to commemorate the day of January 1949, when Lieutenant General K M Cariappa took over to become the Commander-in- Chief of India. He took the position from the former General Sir Francis Butcher, and today is the day that is observed to honour the Indian Army’s brave soldiers, all of them who have sacrificed their lives for the country, and who risk their lives everyday to guard the country. The day is celebrated throughout every Army Command headquarters in the country, and also in the country’s capital. The celebrations begin in Delhi by paying tributes at the Amar Jawan Jyoti at India Gate for all the martyred soldiers.

he tribute is then followed by military shows held that feature the achievements and technology of the Army. Bravery awards of Sena Medals, and Unit credentials are distributed to the soldiers today. The day is celebrated also with military parades at Army Command headquarters everywhere. The parades display various bike pyramids, and aerial stunts, reported Zee News.

Today, India celebrates its 73rd Army Day. The day is marked in honour of all those soldiers who have set an example of brotherhood, selfless service, and their unconditional love for the country.

The parade held today usually carries different ideas, and themes; as in 2020 the theme was the ‘Digital Transformation of Defense’.

As it’s the 73rd Indian Army Day, the Indian Army has arranged a marathon – ‘Vijay Run’ to observe Swarnim Vijay Varsh celebrations of India, when the country triumphed over Pakistan in 1971, reported India TV. The country will also be paying its tribute to the valour of the bravehearts, to thank them for their generous, and noble service.

General Cariappa also was the one who adopted the slogan of ‘Jai Hind’. Which translates to the ‘Victory of India’. He is one of the only two Indian Army officers who holds the Five-Star rank of Field Marshal. During the Indo-Pakistani War of 1947, Cariappa also led the Indian forces on the Western Front.

Here are some unknown facts about the Indian Army:

Let this day be a reminder of the selfless Indian Army soldiers that protect, and guard the borders of the country to keep its citizens safe.