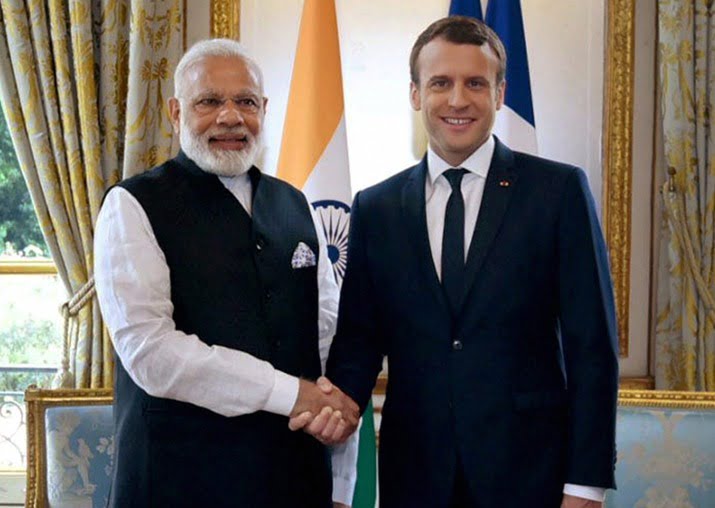 India has extended unprecedented support to Emmanuel Macron in his war on terrorism. What explains the support? Is it public opinion or strategic interest? Why are Islamic leaders still provoking? This articles will try to answer all these questions

What is all the fuss about?

How does it matter to India?

There were several instances where India kept quiet and chose not to speak such as the Armenia Azerbaijan crisis – Xingjian , #Hong Kong the decades old Israel Palestine conflict India chose to raise its voice in support of France , Considering the view on public opinion # I stand with France was trending on twitter. But if this was to be considered then India would not have kept quiet on so many different aspects

What about strategic interests?

Here is how this works

France is pushing for policies to implement a uniform civil code to put the French constitution above any religious law: and this an works as a template for a secular country like India where ideas such as separatism and radicalism will not be able to exhort their power where the law of the nation is supreme and trumps every other #law plus it is in interest of the #Modi government as it was mentioned in their manifesto to implement this law

The Uniform Civil Code (UCC) calls for the formulation of one law for India, which would be applicable to all religious communities in matters such as marriage, divorce, inheritance, adoption.

The code comes under Article 44 of the Constitution, which lays down that the state shall endeavour to secure a Uniform Civil Code for the citizens throughout the territory of India.

The origin of the UCC dates back to colonial India when the British government submitted its report in 1835 stressing the need for uniformity in the codification of Indian law relating to crimes, evidence, and contracts, specifically recommending that personal laws of Hindus and Muslims be kept outside such codification.

Increase in legislation dealing with personal issues in the far end of the British rule forced the government to form the B N Rau Committee to codify Hindu law in 1941.

Based on these recommendations, a bill was then adopted in 1956 as the Hindu Succession Act to amend and codify the law relating to intestate or unwilled succession, among Hindus, Buddhists, Jains, and Sikhs.

However, there were separate personal laws for Muslim, Christian and Parsis.

In order to bring uniformity, the courts have often said in their judgements that the government should move towards a uniform civil code.

The judgement in the Shah Bano case is well known, but the courts have made the same point in several other major judgements.

By arguing that practices such as triple talaq and polygamy impact adversely on the right of women to a life of dignity, the Centre has raised the question whether constitutional protection given to religious practices should extend even to those that are not in compliance with fundamental rights.

Protection to Vulnerable Section of Society: The UCC aims to provide protection to vulnerable sections as envisaged by Ambedkar including women and religious minorities, while also promoting nationalistic fervour through unity.

Simplification of Laws: The code will simplify the complex laws around marriage ceremonies, inheritance, succession, adoptions making them one for all. The same civil law will then be applicable to all citizens irrespective of their faith.

When enacted the code will work to simplify laws that are segregated at present on the basis of religious beliefs like the Hindu code bill, Sharia law, and others.

Adhering to Ideal of Secularism: Secularism is the objective enshrined in the Preamble, a secular republic needs a common law for all citizens rather than differentiated rules based on religious practices.

However, the rights of women are usually limited under religious law, be it Hindu or Muslim. The practice of triple talaq is a classic example.

If a uniform civil code is enacted, all personal laws will cease to exist. It will do away with gender biases in Muslim law, Hindu law and Christian law that have been often challenged by women on the ground that they violate the right to equality.

Exceptions in Central Family Laws: The preliminary sections in all central family law Acts enacted by Parliament since Independence declare that they will apply to “the whole of India except the state of Jammu and Kashmir.”

Communal Politics: The demand for a uniform civil code has been framed in the context of communal politics. A large section of society sees it as majoritarianism under the garb of social reform.

Constitutional Hurdle: Article 25 of Indian constitution that seeks to preserve the freedom to practise and propagate any religion gets into conflict with the concepts of equality enshrined under Article 14 of Indian Constitution.

Collaborative Approach: The government and society will have to work hard to build trust, but more importantly, make common cause with social reformers rather than religious conservatives.

Brick by Brick Approach: Rather than an omnibus approach, the government could bring separate aspects such as marriage, adoption, succession and maintenance into a uniform civil code in stages.

Gender-Sensitive Approach: The government would also do well to complement the overdue move towards a uniform civil code with a comprehensive review of several other laws in the context of gender justice.

Pan-India Approach: Bringing Jammu and Kashmir into the country’s mainstream of family laws is an exercise that needs to be undertaken also for Goa, Daman and Diu, Puducherry, Nagaland and Mizoram.