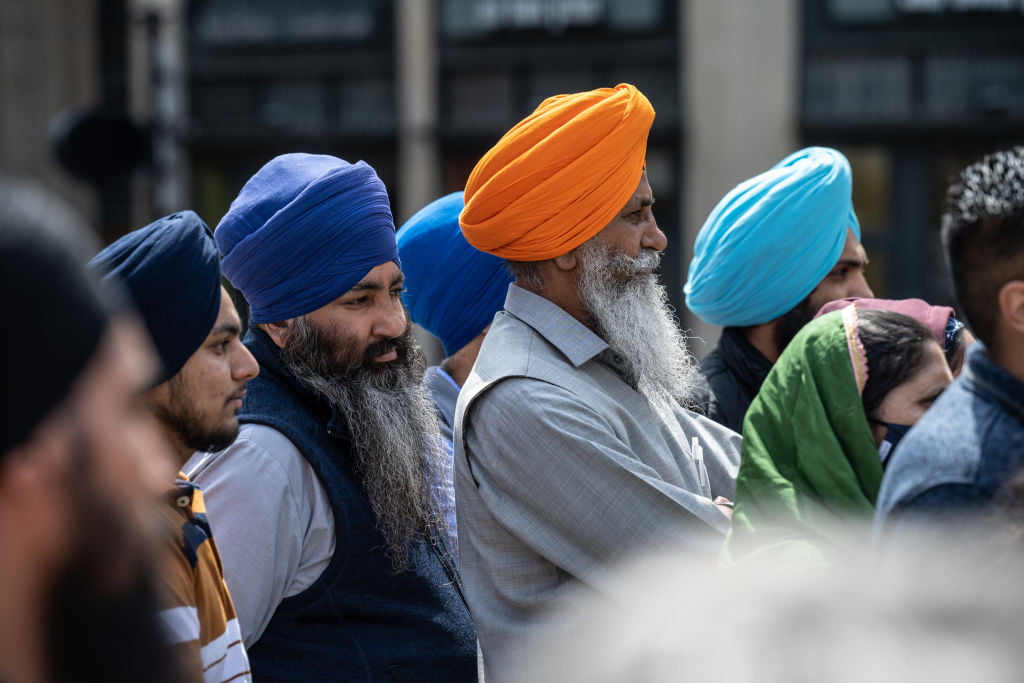 INDIANAPOLIS, IN - APRIL 18: Members of the Sikh community gather and listen during a vigil at Monument Circle on April 18, 2021 in Indianapolis, Indiana. The vigil is held for the victims of the mass shooting at a FedEx facility on April 15th. According to reports, the shooter, Brandon Hole, purchased the two assault weapons he used in the shooting even after having a shotgun confiscated by the FBI in a previous investigation. (Photo by Jon Cherry/Getty Images)

Canada often is seen as a very liberal migrant-supporting nation.

But there have been many cases where directly or indirectly policy has led to cultural disturbances.

The most prominent example is the burqa ban that many states in Canada tried to implement.

Even though prime minister Justin Trudeau strongly condemned it, it still caused much unrest among the Muslim population.

One such similar policy again has caused a culture war in Canada.

What is the cause of this issue?

Over 100 Sikh security guards have been laid off, demoted or relocated since April for keeping a long beard. These people were previously stationed at City of Toronto properties.

But it was not meant to discriminate.

The rules required them to be clean-shaven so that they can wear properly-fitting N95 respirators while working.

As a result of the city’s inspections of work sites, security contractors with employees who are not clean-shaven were deducted billable hours.

What has been the response from the Sikh community?

This bill has drawn condemnation from many Sikh communities domestically in Canada as well as internationally.

The World Sikh Organisation (WSO) has called the policy absurd and said the guards were being punished for their faith, which requires them to grow their facial hair and it also urged the city administration to change the rule.

Balpreet Singh of the Ottawa-based WSO said this “unfair and unnecessary” policy has resulted in more than 100 security guards losing their jobs.

New Democratic Party (NDP) president Jagmeet Singh has tweeted: “Over 100 Sikh security guards have been removed because of this “clean shave” requirement. This policy is discriminatory and isolates workers. Many of these same individuals served us through the height of the Covid pandemic. They deserve to be immediately reinstated.”

They deserve to be immediately reinstated https://t.co/4QUxlkButY

Meanwhile, Punjab minister Harjot Singh Bains tweeted: “Beard and moustaches are identity of a Sikh and of utmost value to his faith. Urge @cityoftoronto to roll back the decision which is against the faith of Sikhs, as it has hurt sentiments of Sikhs worldwide.”

After the complaint by WSO and all the international backlash it is getting the City of Toronto is directing its contractors to reinstate any security guard who lost his job because he was required to shave his beard in order to wear an N95 mask at work.