In a proud moment for India, the ‘Tomb of Sand’ has become the first Hindi novel to win the prestigious International Booker Prize. It is the first book in any Indian language to win such a prestigious award. Geetanjali Shree has authored the book.

Originally called ‘Ret Samadhi’, the book is set in Northern India and it follows an 80-year-old woman who falls into a deep depression after her husband’s death and tries to gain a new lease on life. Although the story is fictional, it showcases different serious themes such as the Partition, gender, religion and countries.

At the award ceremony on Thursday, Ms Shree stated that she was “completely overwhelmed” by the “bolt from the blue” as she accepted her prize worth GBP 50,000. She shared the prize with the book’s English translator, Daisy Rockwell. 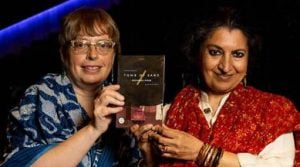 In her acceptance speech, Ms Shree said, “I never dreamt of the Booker, I never thought I could. What a huge recognition, I’m amazed, delighted, honoured and humbled.” Continuing she said, “There is a melancholy satisfaction in the award going to it. ‘Ret Samadhi/Tomb of Sand’ is an elegy for the world we inhabit, a lasting energy that retains hope in the face of impending doom. The Booker will surely take it to many more people than it would have reached otherwise, that should do the book no harm.”

Ms Rockwell, the translator of the book, is also a writer and a painter living in Vermont, US. Ms Rockwell joined Ms Shree on the stage to receive her award for translating the Hindi novel. She described translating the novel as a “love letter to the Hindi language.”

The judges of the Booker Prize have described the novel as a “joyous cacophony” and an “irresistible novel.”  According to Frank Wynne, the judges were “captivated by the power, the poignancy and the playfulness” of the novel. They were further impressed by the fact that rather than responding to a tragedy with seriousness, Ms Shree’s playful tone and exuberant made the book “engaging, funny and utterly original.”