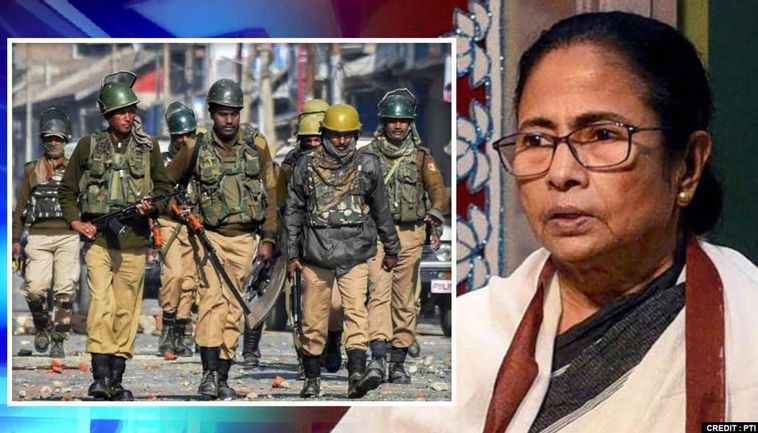 Mamata Banerjee on the killing of 4 people in cooch behar

During the fourth phase of assembly elections in West Bengal, a heinous crime took place. Four people were killed in the Sitalkuchi constituency of Cooch Behar, West Bengal, and Mamata Banerjee, the Chief Minister described the incident as “Genocide”.

According to the Special Police Observer, the violence flared up between the locals and CISF personnel, when the local people attempted to “snatch their rifles”. Subsequently, the CISF personnel opened fire in self-defense, in which four of the locals were killed.

“A scuffle (between locals and CISF personnel) took place and the locals gheraoed them and attempted to snatch their rifles, following which the central forces opened fire. Further details are awaited,” a senior police officer stated.

Just after the heart-wrenching incident took place, both the political parties, the Trinamool Congress and the BJP accused each other of the violence. The occurrence of this episode triggered the rivalry between both parties and their die-hard supporters.

Various statements were made by the leaders, one of which was Sitalkuchi’s BJP candidate, Baren Chandra Barman. He clearly blamed the TMC activists for the murder and said that the deceased person was the party’s polling agent at the booth.

“He was our polling agent and was going to the booth when TMC goons shot him dead. Rabindra Nath Ghosh’s claim is a total lie. We have informed the SP and the ECI about the incident, demanding immediate arrest of the culprits,” Barman said.

Furthermore, he also argued that neither the police nor the central forces were present at the crime scene.

As soon as the news broke, the Chief Minister of West Bengal came in front of the media and declared the happening as a planned genocide. She also attacked the Election Commission for allegedly suppressing the facts. The chairperson of TMC attacked the Prime Minister, Narendra Modi, and the Union Minister, Amit Shah for the incident and declared them as “incompetent”.

While communicating to the reporters, Didi said, “It is genocide. We have decided to observe today as a black day. The forces fired at them directly. The CISF is trained to provide security to industries and not to control a mob. I could not sleep last night but the Prime Minister was eating sweets. Such an incompetent government, incompetent Prime Minister, incompetent home minister.”

On the day of the occurrence, the Poll Panel was found to defend the actions of the CISF saying that it became “absolutely necessary.” Moreover, they also prohibited the entry of politicians into the district for 72 hours.

As per the Election Commission’s order, Mamata Banerjee could not visit the spot but she did a video call with some of the bereaved families.

She also said, “The Election Commission has not allowed me to go to Sitalkuchi. The MCC (Model Code of Conduct) has become the BJP Code of Conduct… Just to satisfy the BJP, I have been stopped from meeting the families.”

As reported by the local sources, West Bengal is witnessing a lot of violence during and post the election period. Both the parties equally contributed to it, just to meet their different set of aims. Bengal seems like a war zone where people are brutally killed in the name of their own good.