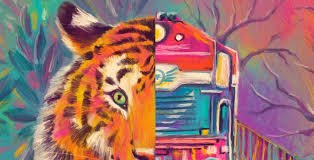 It is often said that somebody’s development is somebody else’s crisis. This battle between wanting to develop and commercialize everything or choosing to protect natural resources has been a mainstream issue to discuss about since time immemorial.

Talking about commercialization, the Indian state of #Goa has been the one with most rapid developments which have time and again hurt the indigenous existences. Goa being the most loved holiday spot, sure does open up a lot of opportunities for industrial investments and developments; but at what costs?

The recent developments that have posed harm to the very existence of Goa are the thirty odd new projects that are ought to threaten wildlife in and around #BhagwanMahaveerWildlifeSanctuary and #MollemNationalPark. With the state government laying down several new projects in and around these areas, the inevitable destruction has stressed the residents. The projects include the four laning of the NH4A and the double tracking of the railway line, which are only merely some of the several proposals. These projects have been cleared by the Ministry for Environment, Forests and Climate Change and they were passed during the lockdown. It is believed that these projects can lead to one lakh trees being cut down on the whole, and 59,000 of these trees are located in the state of Goa. The projects are also expected to harm around 170 hectares of land.

The fight between safe guarding local life and the effective commercialisation so as to attract foreign visitors, investors and the like has posed great threats to the land of the residents. They opine that the measures being taken in order to constantly convert Goa into this uber-cool tourist spot is not justified as it disrupts a lot of local biodiversity. In order to stop this from happening, residents of Goa have been actively indulging themselves in various protests; however since the media coverage was quite limited, it has been observed that individuals who are well informed of the issue are the only ones participating in the protests. These #SaveMollem protests have been the talk of the town and yet haven’t been heard so well.

On Sunday, 8th of November 2020, around 3000 Goans bore torches, lanterns and candles and set out to protest in the village of Chandor. They sang, danced, played drums and raised slogans such as #SaveMollem and #GoyantKollsoNaka (We don’t want coal in Goa).

Many instances of the protests have been reported on social media whereas the state government has simply disregarded them as “politically motivated protests by outsiders”. It has also sanctioned multiple projects during the lockdown and is reporting that merely one thousand trees are to be uprooted for the projects. The Goa Tamnar Transmission Project Ltd (GTTPL) has commented that “The forest tree enumeration stands at 43,201. However, actual felling or trimming of trees in the forest area would be 14,700, which is just 35% of the enumerated quantity. Moreover, as per the prevailing regulations, payments against the enumerated 43,201 forest trees, are being paid to the forest department. Out of the 14,700 trees expected to be felled/trimmed, only 1,000 trees would be felled/trimmed in the wildlife sanctuary.”

Furthermore, Goa’s environment minister Nilesh Cabral has expressed that the double line of railways would result in the swift passing of the trains through the Western Ghats. He also opines that this project will result in the lower usage of fossil fuels than necessary due to the increased speed of the trains.

While issuing statements about the projects, the Goa state government has claimed that the projects are aimed at public interest. However, several environmental activists have alleged that these projects merely “serve the vested interests of corporates and investors who aim to convert Goa into a coal transportation hub.”

This has been opined because of the central positioning of the Mormugao Port Trust in the issue as it is well connected through the South Central Railway and the NH17A, NH17B and NH4A. This port is famously identified to have been used for the coal and iron ore transferring and handling. It has been reported that currently the coal handling capacity of the port is 12 mtpa (million tonnes per annum), and it aims to increase its capacity so as to fulfil the coal demands in the industries. Therefore, these projects are aimed to help achieve that.

One of the key players in the project is the #AdaniGroup which has released statements alleging that the claims of the activists are completely false. “The Adani Group refutes and condemns #FakeNews circulated by politically motivated groups and fictitious business interest comprising road and railway projects in the state of #Goa”, it said in a statement issued on the 5th of November 2020.

The social media platforms, however have witnessed various outrages regarding the issue. The basic POV of the protests is that these projects are harmful to the wildlife as it causes forest fragmentation. Activists and public figures have utilized the platforms to express their concerns. Licypriya Kangujam, a nine year old activist urged the government to reconsider, “Govt led by @DrPramodPSawant Sir wants to destroy this beautiful Mollem Forest to open for coal mining and railways lines and other projects. It is also a national park. This will endanger the lives of thousands of people and the wildlife of Mollem. Plz reconsider the decision,” she tweeted.

Congress MP Shashi Tharoor has also raised his concerns. “Thousands of Goa residents protest at Govt plans to make the state a coal hub: https://t.co/yVosY6mDxO .The proposed 400 KV line through a wildlife sanctuary & National Park along the Western Ghats will choke the lungs of Goa. But w/this govt, crony capitalists prevail over people!” he exclaimed.

In recent developments, Pramod Sawant, Chief Minister of Goa has stepped back from the projects and has aimed at offering concessions catering the views of the opposing factors. This action has been taken as a result of the BJP core committee’s claim to have advised him to “go slow”.