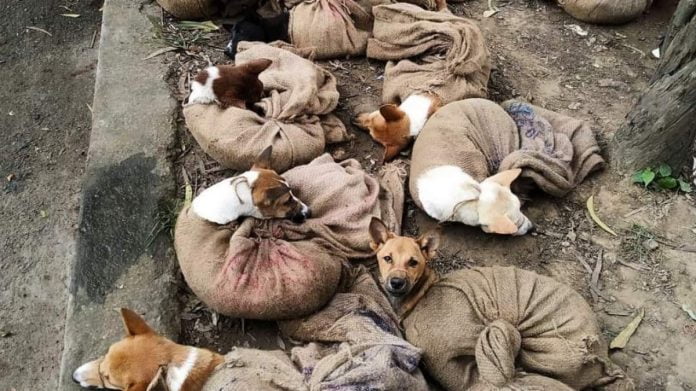 A photo of dogs sacked up in a wet market started surfacing on social media last week. Apparently, those dogs were being illegally exported to Nagaland for their meat to be consumed. Social media went into a frenzy as animal advocates all over the country were outraged. Led by Maneka Gandhi, the activists appealed to the Nagaland government to ban the sale and consumption of dog meat. They started an email campaign which received an overwhelming response of 1,25,000 mails in just 3 days. Finally, on Friday (3rd July), Chief Minister Neiphiu Rio declared that the government has banned the commercial and import, trade, sale and consumption of dog meat – both cooked and raw, in lines with the Prevention of Animal cruelty Act 1960.

Animal activists nationwide celebrated the iconic decision and praises were bestowed on the Nagaland government. They called the ban a historic move. There was another point of view which emerged which termed the campaigns of the animal activists as hypocrisy. The question of “why only dog meat should be banned?” was asked. Many felt that there should be a total ban of consumption of all kinds of meat throughout the country. Another sector of people started debating that this is some sort of discrimination against the north easterners. Their point is that when different kinds of meat are consumed in different states, why did the activists urge to ban meat that is consumed only by North easterners. They also said that this decision is in violation of Article 371 A.

Let us learn about the two major Acts in play in this context to understand both schools of thought a little better. What is Prevention of Animal cruelty Act of 1960? This Act was passed to prevent the infliction of unnecessary pain or suffering on animals as well as to prevent cruelty to animals (any animal except human being). There have been mentions that dogs are beaten up with solid clubs to kill them before consumption in Nagaland. This when combined with the illegal trade and transport of the animals definitely fits the criteria of animal cruelty.

Article 371 A was a provision inserted during the formation of Nagaland state in 1963 after a 16-point agreement was signed between the Naga Convention and the Center. According to the Act the matters of religious and social practices of the Nagas cannot be legislated by the Parliament. It also allows the Naga tribes to maintain their social practices and customary laws. When viewed in that context, eating of dogs has been practiced in Nagaland since generations and is a part of their culture. Hence, we can understand why some people, especially from the North Eastern states are upset with the dog meat ban.

EastMojo, a North Eastern India’s news site, in one of its articles speaks about how the food menu in mainstream societies do not accommodate indigenous North eastern food. The writer says that by dictating what they should or shouldn’t eat, this decision is making them feel shameful about their own food practices. He further states that “Naga tribes do not discriminate animals on the basis of some animals to be more equal than others, and they treat them equally, be it for food or domestication, and they don’t let greed take over them which may lead to exploitation of animals for more meat or simply commercialization”. The article also says that the animals are killed in best ways possible without inflicting pain on them as their culture doesn’t agree with torturing animals and hence, this ban is a case of cultural imperialism and racism in the name of prevention of animal cruelty.

Every region sure has its own traditions and culture. Constitutional Articles are also present to ensure the smooth functioning of the State. We cannot conclude which is the right or wrong side in the matter as these views can be subjective. A lot of debates have already been sparked about this and a lot more will surely follow. The one stand which we should all collectively take is to not generalize the entire population of Nagaland as ‘dog eaters’ or call them ‘savages’ on social media.

WHY FAST TRACKING COVID CLINICAL TRIALS IS NOT A GOOD IDEA