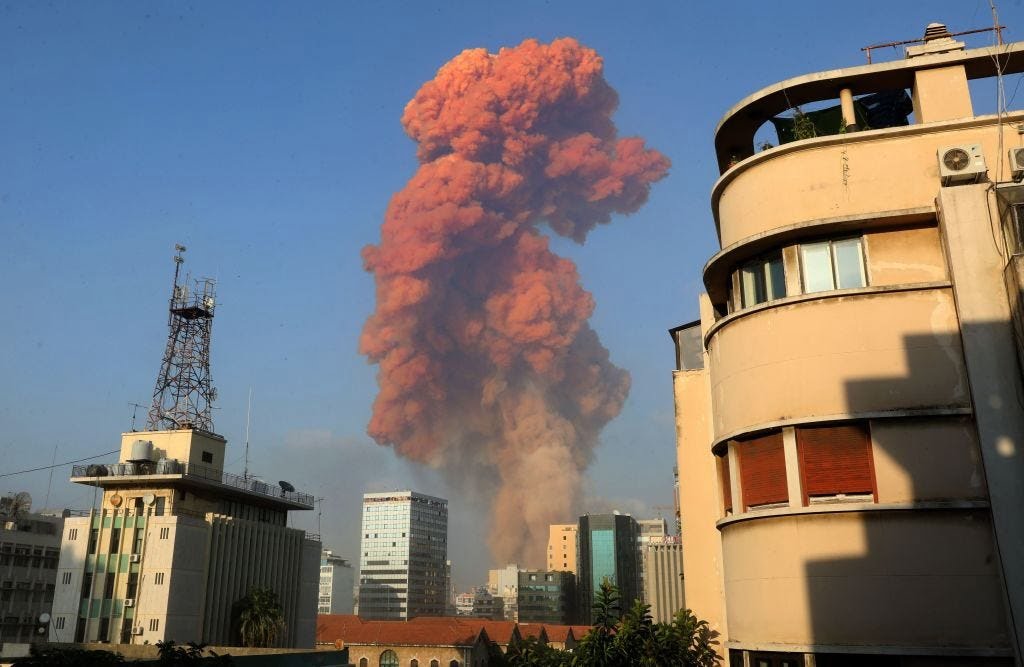 Beirut, the capital city of Lebanon was devastated yesterday (4th August) as a giant explosion at a warehouse in the port shook the city. Videos were seen on social media where smoke emerging from the warehouse engulfed the sky like a big ball of fire. The blast also registered a 3.3 magnitude earthquake and damaged houses and other establishments till almost 10 kms away from the explosion site. The buildings in the immediate neighbourhood were the most affected as the balconies and windows were shattered and all that was left was debris and ash. So far, a 100 people have been reported to be dead and thousands of them are injured.

There are still a lot of people missing and search operations couldn’t be effectively continued as there was electricity outage. The casualties include 10 firefighters, one Australian, two Filipinos, and many more are injured. A Japanese citizen, an Indonesian and six Turkish citizens and some naval peacekeepers with United Nations Interim Force (UNIFIL) have also been injured severely.

Initially the fire was blamed on a major fire at a firecrackers warehouse near the port. Earlier today morning Prime Minister Hassan Diab confirmed that the explosion occurred due to 2,750 metric tonnes of ammonium nitrate, a high intensity explosive which was stored at a port warehouse in the last 6 years without proper security measures. Though the cause of ignition isn’t known yet, security officials suspect that it might not have been the only cause for the explosion. Robert Baer, a former CIA operative said that the nature of fire (orange ball lookalike) can indicate the presence of possible military grade explosives. There was also some sort of confusion when US President Donald Trump called the incident an attack. The Lebanese officials declined these claims.

Ammonium nitrate is a highly volatile compound used in fertilizers and explosives. While its pure solid form is stable, it is more likely to explode when mixed with even minute amount of contaminants. There are strict guidelines regarding the storage of the compound. It shouldn’t be stored with any fuel, organic materials, chlorides or metals. The storage units should have fire resistant walls, non-combustible flooring and controlled temperatures, according to the Environmental Protection Agency (NPA) guidelines. A further probe is ordered by the government into the matter and the PM has stated that he wouldn’t rest until the offenders are punished.

The explosion has caused about 3-5 billions USD worth of damage to the city. 90% of the hotels in the city have been damaged. Lebanon is already facing economic crisis given the pandemic situation and lockdown. The currency of the country has stooped to lower levels in the recent months and overused electricity system has caused major outages in the capital. The economy is further expected to contract by 12% this year, according to IMF.

Lebanese armed forces have been instructed to respond to the disaster and the government has allocated 100 billion Lebanese pounds (66,335,00 USD) to deal with the tragedy. UNICEF and Red Cross are on the ground giving all the help they can and have put out appeals for blood donations. The Emergency rooms of hospitals are flooded with patients and some are even filled to full capacity.

Other countries have also offered help as US President Donald Trump, Australian PM Morrison and Russian President Putin have all announced assistance. Russia has dispatched 5 planes with medical equipment and personnel to the city. France’s support is on the way and Egyptian field hospital has received patients. Israel, Qatar, Kuwait, UAE and Iraq will also soon send help to Lebanon.

There is also a number of social welfare associations and NGOs which have volunteered to send help to Beirut, and they are also accepting donations from all over the world. Let us all keep Lebanon in our prayers and hope that they recover soon from this catastrophe.

WHAT YOU SHOULD KNOW ABOUT BUNYA OR TICK-BORNE VIRUS