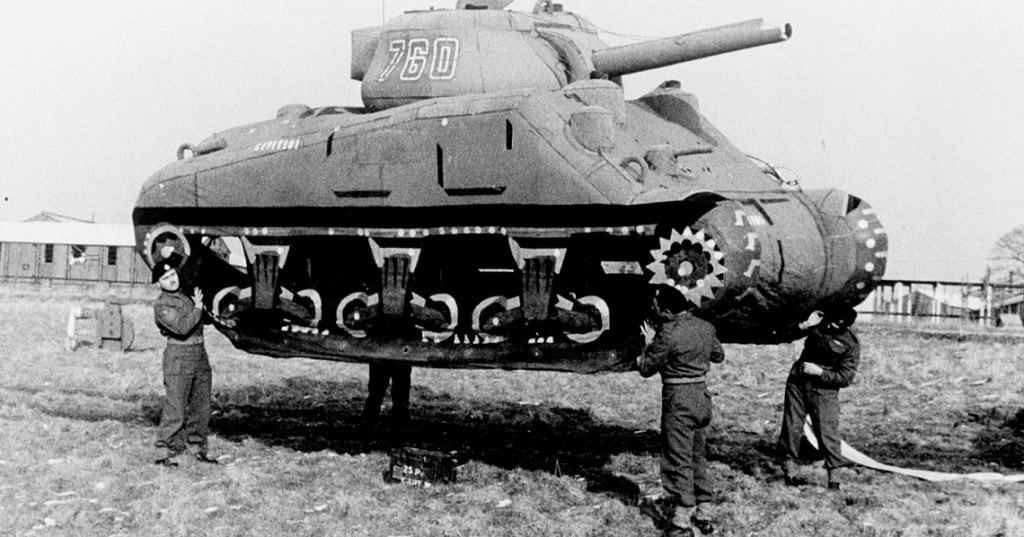 The Ghost Army was a United State Army strategic deception unit during World War II which was officially known as the 23rd Headquarters Special Troops and it was the first mobile, multimedia, tactical deception unit. The army were a combination of audio technicians, artists, actors and designers, and they job was to pretend to be something which they are not.

The unit had 1100 men and everyone was given a unique mission within the Allied Army to imitate other Allied Army units to mislead the enemy. After they landed in France they put on a “traveling road show” using inflammable tanks, fake radio transmissions, sound trucks, scripts and pretence till the end of the war. They staged more than 20 battlefield deception often operating very close to the front lines between 1944- 1945.During the road show they would drive canvas-covered trucks in looping convoys to create an illusion. They used to spend time at the French cafes to spread gossip, play the part of Allied generals.

Ghost soldiers were told to use their brain and talent to mislead, confuse the German Army. Many were recruited from advertising agency, art school, and other occupation just to encourage creative thinking. The ghost soldiers were artists, actors, engineers, designers, etc. They used equipment pioneered by British forces like artillery, fake aircraft, dummy tanks, giant speakers broadcasting the sound of the men and artillery. The unit consisted of the 603rd Camouflage Engineers, 406th Combat Engineers, the 3132 Signal Service Company Special, and the Signal Company Special.

The 3132 Signal Service Company handled the sonic deception. A team from 3132 went to Fort Knox to record sounds which they brought to Europe, for each deception the sound was mixed to match the scenario they wanted their enemy to believe. This was recorded by the state-of-the-art wire recorders and played with powerful amplifiers and speakers mounted on halftracks, these sounds were audible up to 24km away.

It was called as “Spoof Radio” and was handled by the Special Company. Operators created phony traffic nets, copy the radio operators from real units. The Signal Company operators copy a deceased operator so that the enemies will not understand or detect the real unit and that its radio operator is long gone.

The 603rd Camouflage Engineers were the visual deception arm of the Ghost Army. It included cannons, jeeps, inflatable trucks, etc. They equipped airplanes that they would inflate with air compressors and then disguise defectively so that enemy aerial scouting could see them. They could create dummy airfields, motor pools, etc in a few hours. There were many artists in the unit and several of these artists-soldiers went on to have a major impact on art in the postwar US.

The Ghost Army fooled Axis Sally, the radio propagandist into reporting that an Allied division was preparing for battle at a place where there were no troops. The Germans were fooled into thinking that they would attack Calais instead of Normandy and they were also convinced that they had more tanks than the Germans. Their most successful operation took place in 1945 making the Germans believe that the Allies were preparing to cross Rhine River, and when the real troops made their crossing they encountered little resistance.

After the war the unit soldiers were sworn to secrecy, records were classified and equipments were packed. Except a news article after the war no one spoke about it publicly about the deceivers until Smithsonian article in 1985. It was kept as a secret for more than 40 years after the war, until it was declassified in 1996.