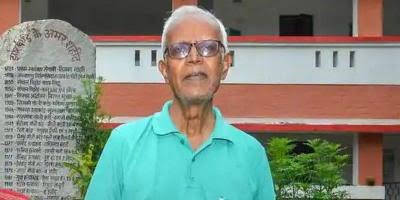 Father Stan Swamy is currently the oldest man accused of terrorism in India and is in jail for the popularly ‘unpopular’ Bhima Koregoan case.

Father Stan Lourduswamy is a Jesuit priest, a Tamilian by birth and has been residing in the state of Jharkhand for over 30 years as voice for the Adivasi and the tribal communities of the region. He has been a support to these people and has raised issues about their standard of living, their life in coal mines, non-implementation of the 5th schedule in the area, the development of the region among others. Stan also has opposed the setting up of the ‘land banks’ in the region as it would eat up the land belonging to the tribal communities of the region. He has also been an important part of the JOAR (Jharkhand Organization against Uranium Radiation) which was a campaign against Uranium corporation of India limited.

Let us first know that this is not the first time he has been arrested, he was arrested earlier for same reasons but this time, the case we saw recently stands a bit different. He is currently 83 years old and suffers from Parkinson’s. He was arrested on Thursday and was taken to Mumbai where he was questioned for almost 15 hours about his alleged involvement with Maoists and ‘anti national’ activities. Stan, in a video recorded, also said that he was presented extracts from his computer that the show his links with Maoists or Naxals which he disowned and claimed that these were ‘stealthily’ installed in his computer.

Stan has been at crossroads with the investigation agencies as they previously raided his home, to prove somehow or the other, his connection with Naxalites. While Stan and all others related with him deny such allegations as they claim that the only thing he has done is to stand up for the rights of the underprivileged sections; he has even moved to the High court seeking the release of over 3000 youth of Jharkhand as they were arrested after being branded as Maoists.

His arrest in the Bhima Koregaon case has led to many voices springing up against it, the CM of states like Kerala and Jharkhand have spoken against this unfortunate event, also a 3km human chain was formed in Bengaluru against his arrest

The Bhima Koregoan case is such that it is has taken almost 16 people under arrest for rigid allegations like terrorism, sedition, Maoism and so on. These 16 people include well known, lawyers, intellectuals, activists among others; we have all heard of stories of people like Varavara Rao, Anand Teltumbde and so on.

Bhima Koregaon is a tiny village in Pune, Maharashtra that houses the Vijay Stambh or the victory pillar that was built by the British to commemorate the Battle of Bhima Koregaon that took place in 1818 in which the Dalit led British army won over the army of Peshwa Bajirao II. This victory is indeed special for Dalits as they feel it is a victory not only against the upper caste but also against the injustices the community has faced.

In 2018, which marked the 200th year of the battle saw a large gathering of people. Then suddenly erupted violent clashes between the two groups of Marathas and Dalits, also a person lost his life in the same. This is seen in the backdrop of the Elgar Parishad, a big public conference which was organized by Dalit groups. The police claim that inflammatory speeches were made on this day by leading lawyers, intellectuals, activists which led to clashes the next day. Some people also claim that the violence erupted when people carrying saffron flags entered the scene.

Now, the law has to take its course in a proper manner so that the innocent gets justice and the truth prevails.