THE ARREST OF VIKAS DUBEY AND THE DEFECTS WITHIN THE SYSTEM 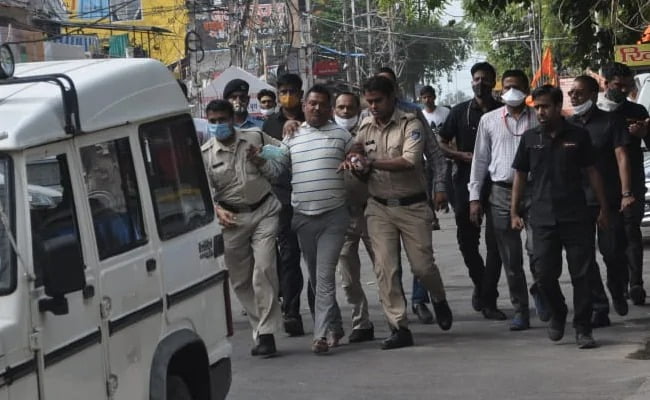 The weeklong hunt for Vikas Dubey, across three states finally came to an end today morning as Madhya Pradesh police arrested him in Ujjain around the same time two of his close aides were encountered in UP. Although it is not clear how he reached Ujjain, police were alerted by the locals when he was buying prayer offerings at the Mahakal temple around 8 am.  He was seen shouting “Main Vikas Dubey hu, Kanpur wala” while he was dragged to the police van by half a dozen cops. Madhya Pradesh Home Minister, Narottham Mishra confirmed the arrest. He said “It is a big success for the police, Vikas Dubey is a cruel killer. The entire Madhya Pradesh police force was on alert. He has been arrested from Ujjain Mahakal temple. We have informed Uttar Pradesh Police”.

Dubey has 60 criminal charges against him including murder, extortion, kidnapping and rioting. He was also accused in the murder case of BJP leader Santosh Shukla which happened in 2001 inside a police station in Uttar Pradesh. After hearing about his whereabouts in Chaubeypur, a village in UP, on 2nd July, policemen were all set for a raid. Allegedly, a local cop had given a reverse tip to the gangster. Hence, on 3rd July, when 20 policemen reached the place, Dubey and his aides started firing at the cops with AK – 47 rifles.  A total of eight cops which included a DSP, and three Sub Inspectors were killed in the ambush. The notorious gangsters escaped very soon, and a fierce man hunt was launched. The bounty for finding him was raised from 2.5 to 5 lakh rupees.

The whole incident has been completely dramatic, and the general public are now raising a lot of questions across social media. They are questioning how a criminal who killed 8 policemen was able to travel hundreds of kilometres from Uttar Pradesh to Madhya Pradesh with eagle’s eyes on him. Some are painting it a political colour by asking why he only chose to travel the BJP rules states like Haryana and Madhya Pradesh. Others have chosen the religious angle and are arguing as Dubey is a Hindu, there has been no voice of support for him. There were also speculations that as Dubey and his men have a lot of inside knowledge about certain influential people of UP, they will be encountered instead of an arrest. Post arrest while some called it a surrender, MP police have brushed off those allegations.

According to the police officials, Dubey and his men used various modes of transport like motorcycles, an SUV, sand trucks and taxis to escape to Haryana from Kanpur. Instead of main roads, they took to the interiors to avoid police force. After changing their blood-stained clothes, they boarded sand laden trucks for their escape. This begs the question of how the gang could execute such an elaborate escape without being caught. While some are linking it to his connections with RSS and local BJP leaders, some are pointing towards the inefficiency of UP police.

Vikas Dubey grew into an underworld gangster in UP across the span of 15 years owing to his connection to political parties and leaders. He is said to have friendships with every political party in power in Uttar Pradesh for 15 years. His escapes are always supported by certain groups as he is presented as a Brahmin leader. It can be deduced how intricate his network was if he had to receive a tip about police movement before even the raid force reached his house. Now the local cop accused of given him the reverse tip is now arrested and more than 200 policemen of the UP-state force are now under investigation regarding their possible links to the gangster.

This case exposes how depth and dangers of the criminal – police nexus. UP police department was shown to be the most corrupt one in the country by a survey conducted by Transparency International India with LocalCircles in November 2019. There was an increase in corruption between 2018-19. In another report by the State of Police in India last year, about 68% policemen in UP were not satisfied with their salaries. This was higher than any other states. Thus, the reason for the unchecked corruption can be established. The UP police have been in news for a lot of wrong reasons in the recent years. The bribe rate card in 2018, the suspension of Noida Policeman in 2019 after he brought corruption charges against five IPS officers, being the prominent ones. It is said that conniving with criminals and gangsters is an easy way out for the police who are posted in areas that are under constant political influence and media scrutiny.

The governments that have come up in the state are also to blame for these defects in the system. The police force is not well equipped to deal with the criminals. Some of the reasons for this are that the state faces highest shortage of vehicles for patrolling and other police work. 58% of the cops have not received weapons training before joining the force. No matter who came to power these problems of the state police haven’t met with a solution. The case of Vikas Dubey is a live example that shows the inefficiencies within the system.

After decades of independence and countless corruption-free promises, corruption is still the biggest problem that is being combatted by our country. For all the services they provide the government should make sure that the policemen are paid enough salaries to take decent care of themselves and their families. Governments should also take up the improvement of police infrastructure seriously. Political leaders should also be careful about the associations they develop. Protection and welfare of their voters should be top priority. A lot of changes should be brought about in the system to avoid more people like Vikas Dubey emerging in the society.

THE ONLINE EDUCATIONAL PLANS OF STATE AND CENTRAL BOARDS