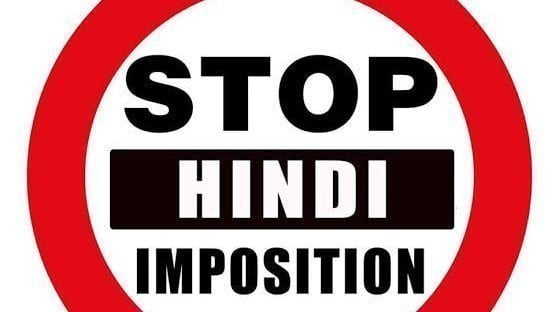 14th September is celebrated as Hindi Diwas across the country to celebrate adoption of Hindi in Devanagari script as one of the official language in different Hindi speaking states of India. Today while speaking on the occasion, Union Home Minister Amit Shah said that India’s culture and value systems had remained protected primarily because of Hindi language. He said that Hindi isn’t competing with any regional language but complements and strengthens them. He also said that across the length and breadth of a diverse India, Hindi was the most prominent among regional languages in uniting the nation.

While most of the Union leaders have always supported the language or its somewhat imposition, several non-Hindispeaking states, especially the South Indian states of Tamil Nadu and Karnataka have always been against the language being imposed on them. Even since the pre independence era, there have been quite a few agitations in these states regarding the same matter. In this article, we discuss 3 of those important anti- Hindi movements.

The Periyar led protests of 1937

In 1937, the newly elected Indian National Congress government headed by Rajagopalachari (Rajaji) introduced the Three language Policy in Tamil Nadu schools which didn’t go well with the Tamilians. A wide spread agitation was led by Periyar EV Ramaswamy’s Self respect Movement and the Justice Party. There were several picket marches, processions, dharnas and powerful speeches which happened across the state for 3 years till February 1940, when Governor Erskine issued a press release declaring the withdrawal of compulsory Hindi in schools. Out of thousands of protestors, 1198 of them including women and Periyar himself were arrested and 2 of those people died in prisons due to illnesses. The deaths of Natarajan from Chennai and Thalamuthu from Kumbakonam fuelled the agitations even more. This was the first anti- Hindi agitation that happened in the country.

In 1963, CN Annadurai, the lone representative of DMK in Rajya Sabha had spoken against the Official Languages Act of 1963 and demanded an indefinite continuation of English as Official Language as it would distribute advantages and disadvantages evenly among both the speakers and non-speakers of Hindi. But when the Act was passed, he led an agitation and got arrested with his party members. However, at the time, then Prime Minister Jawaharlal Nehru promised that English would continue as the official language.

But when Nehru died in 1964, Tamilians were suspicious if Nehru’s assurances would be carried forward by the next government. Adding to their worries, the Congress state government under M Bhaktavatsalam re introduced the Three language formula in Madras Legislative Assembly. This gave rise to the second biggest anti- Hindi imposition protests across TN, mainly with college students on the frontline. A person named Chinnaswamy from Tiruchi killed himself for the cause which was followed by many others doing the same. 3,000 people including Anna Durai were taken into preventive custody by the government. The agitations grew further and a clash between students and Congress leaders in Madhurai led to a riot and from here it spread to all the other parts of the state. In the riots which went on for two weeks, around 70 people died and the Congress’ efforts to deal with the situation with forces of law failed. After resignations from Union Ministers from the state and a lot of backlash, then Prime Minister Sarvepalli Radhakrishnan through a radio broadcast announced that the government would carry forward Nehru’s assurances.

The Namma Metro protests in 2017

In June 2017, after the inauguration of Namma Metro Phase 1 in Bengaluru by then President Pranab Mukherjee, the Bangalore Metro Rail Corporation Limited (BMRCL) faced severe opposition over the usage of Hindi on the signboards on the service. #Nammametrohindibeda movement was launched online against the imposition of Hindi and it was backed up by protests which happened on ground too. Initiated by Narayana Gowda, the Kannada Rakshana Vedike (KaRaVe) President, the movement also received support from then Chief Minister of Karnataka Siddaramiah and his political ally HD Kumaraswamy. Although the authorities said that they were following the guidelines issued by the Ministry of Urban development’s Three language Formula, Kannadigas weren’t ready to accept Hindi in their public transport system. Several protests took place in Bengaluru and protestors even greased/blacked out the signs in Hindi in metro stations. The BMRCL finally budged to the demands of the city people and removed Hindi from the signboards.

A lot of small-scale protests have taken place in the states apart from the ones mentioned above. Many protests were launched on the same day in 2019 after Amit Shah said that Hindi was the unifying factor of India. The battle between the centre and regional governments about Hindi’s role in the country hasn’t found a tentative solution yet.