“When a person responds to the joys and sorrows of others as if they were his own, he has attained the highest state of spiritual union.”

Shivakumar Swamy-also called ‘Nadedaduva Devaru’ or ‘Walking God’ by locals was instrumental in his social, educational, and philanthropic activities spread over eight decades. Here are ten things you might not know about the late Lingayat saint who died at 111 years. 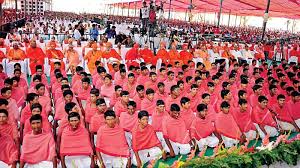 ”When there is unrest in the whole world, India is capable of leading the world to achieve global peace.”