Team India chopped and changed for the upcoming Kiwi challenge 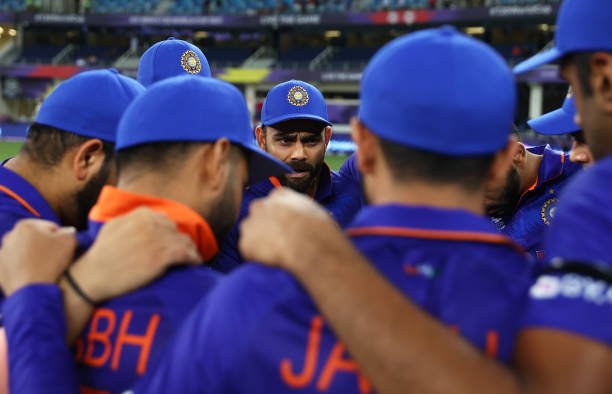 DUBAI, UNITED ARAB EMIRATES – NOVEMBER 08: Virat Kohli of India speaks to their side in the huddle during the ICC Men’s T20 World Cup match between India and Namibia at Dubai International Stadium on November 08, 2021 in Dubai, United Arab Emirates. (Photo by Michael Steele-ICC/ICC via Getty Images)

After an unexpected early exit from the T-20 World Cup this year, team India has geared up for the upcoming challenges. The group stage exit in the big-ticket tournament resulted in severe criticism of team management and the selection committee for showing lack of adaptability with the changing trends of the game.

Rahul Dravid will start his first stint with team India as a full-time coach on the 17th of November with a T20 series. The three-match series will be led by the new captain of the shortest format, Rohit Sharma. Several young players, who have shone in the latest edition of the cash-rich Indian Premier League, have been added to the Indian squad.

Venkatesh Iyer, Avesh Khan, and Harshal Patel will join the team to play their first International series. Besides, the orange cap holder of IPL 2021, Ruturaj Gaikwad, makes his way back into the T20 squad. Shreyas Iyer, Yuzvendra Chahal, Mohd. Siraj and Axar Patel have also made it back into the senior team after a while.

After a forgettable World Cup campaign, Varun Chakravarty and Rahul Chahar have been dropped from the squad. Virat Kohli and Jasprit Bumrah have been rested for the T20s. However, there seems ambiguity over the future of other pros in the upcoming T20I ventures.

After a successful series in England, the senior Indian test squad will be back in action for a 2- match test series, which will follow the T20 Internationals.

Team India’s regular Vice Captain, Ajinkya Rahane, will take over the red ball captaincy for the first match. Cheteshwar Pujara will play a second fiddle to Rahane in the leadership group.

Jayant Yadav, who last played a test match in 2017 (Pune) against Australia, has made a comeback in the longest format. Shubhman Gill, who missed the major part of English summer due to an injury, has also made his way back.

The stylish Mumbai batter Shreyas Iyer along with a pacer from Karnataka, Prasidh Krishna, will hone the whites for the first time in this series. Putting a rest to the rumours, the selectors have confirmed to go with the seasoned keeper Wriddhiman Saha. KS Bharat will serve as a backup option in the keeping department.

The absence of Hanuma Vihari came as a major surprise for the cricketing pundits and fans. The right-hander had missed out on the English summer due to an injury. The last game which Vihari played for India was the famous Test at Sydney, where his defiant innings of 23 not out off 161  earned him great laurels. However, Vihari has been added to the India A squad, which will be travelling to South Africa, later this month.

A Self Critical, Nehruvian tribute to India