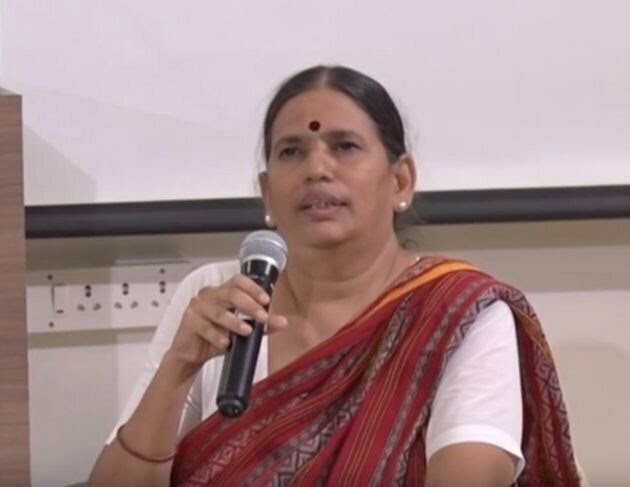 #SudhaBharadwaj was born in 1961 in USA to #economist parents and spent most of her childhood in the #multi-cultural atmosphere of Cambridge. Her mother, #KrishnaBharadwaj was a well-known academic who had founded the Centre for Economics Studies and Planning at Jawaharlal Nehru University. Most of the Sudha’s acquaintances, consider her as a reflection of mother’s grounded #earnestness and #intellectual leanings.

In 1979, Sudha joined the integrated Mathematics program of IIT Kanpur. The strategic location of her living, near the #rural areas in one part, and the #industrial area in the other part provided two disparate worlds for her. As she got more exposed to the life outside, Sudha realised the leaching prevalence of #sexism, #class disparity and an ill practise of #casteism. In order to know more about this power struggle, she joined NSS and began teaching in the caste-ridden rural neighbourhood.

But as she recalls, her turning point in the life was the two biggest events of the 1980s- The #BhopalGasTragedy and the #AntiSikh riots. Perhaps, these two incidents pushed her to become a #democratic rights defender and work within the purview of the law. After graduating in 1984, Sudha was further exposed to the working class struggles, challenges in the life of an Adivasi and the grand swathe of migrant workers brought into Delhi for the 1982 Asian Games, who were working under exploitative living conditions. Through her active efforts and engagement with the students group, Sudha fought for the rights and struggles of the workers. Gradually, she developed ‘a remarkably grounded understanding of #oppression’ and the #intersectionality of caste, class and gender.

In 1986, Sudha moved in Chhattisgarh and thus began her life as an activist. During the 1960s, the mineral rich-Chhattisgarh was a site of mass struggles of the working class. She was a part of the labour movement that began in the iron ore mines of #DalliRajhara, where the contract workers of captive coal mines for #Bhilai steel plant were restless at the partisan treatment of the central trade unions and moved away from them. This led to the formation of the Chhattisgarh Mines Shramik Sangh (#CMSS), that soon became an epitome of democratic rights and attracted students, activists and people from many socio-economic groups.

Furthermore, CMSS expanded into Chhattisgarh Mukti Morcha (#CMM) and founded schools and hospitals, worked for afforestation, encouraged savings, and engaged with cultural lives of workers and even with socio-political issues like alcohol-prohibition and gender. This was a breakthrough experience for Sudha, as she began participating towards the “twenty-four hour union”. In one of the movements, a police firing in 1992 killed 17 workers in Bhilai who were protesting for better working conditions and demanding justice for the murder or #ShankarGuhaNiyogi. Hundreds of workers and worker-leaders were jailed. This unfortunate incident encouraged Sudha to study Law and take her struggles in to the courtroom.

Sudha pursued and practise Law with deep commitment to constitutional rights and democratic movements. She fought against contractualisation of the permanent #workforce, while defending the rights of small enterprises. In the industrial belt of #Raipur and #Bhilai, she fought several cases for workers like cases of dismissals, compensations for injuries, and criminal cases against trade unionists.

She was one of the rarest lawyers who were courageous enough to take up was cases relating to the false implication of #adivasis in criminal cases in #Bastar, and those killed by the police and security forces in fake encounters. She also founded a collective of lawyers called ‘#Janhit’ and served as General Secretary of People’s Union for Civil liberties (PUCL).

However, Sudha’s contribution is not limited to courtroom only. She was part of women groups such as the Mahila Mukti Morcha that led the #anti-liquor campaign in Chhattisgarh, the Chhattisgarh Mahila Adhikar Manch that took on the issue of deaths caused by the forced sterilisation of Adivasi women by the State, and Women against Sexual Violence and State repression (#WSS) that spoke out against the mass rapes and sexual violence inflicted on Adivasi women by the police and security forces among many other issues.

On the 28th of August 2018, along with other lawyers, writers and activists, Sudha was arrested in the Bhima Koregaon case and put in jail under the UAPA law. Five prominent citizens – historian #RomilaThapar, economists #DevakiJain and #PrabhatPattnaik, academic #SatishDeshpande and #MajaDaruwala – filed an urgent Public Interest Litigation (PIL) before the Supreme Court challenging the arrests. But, plea was rejected by the judiciary.

Nine months after her arrest, Sudha was among 21 women honoured by the Harvard Law School in 2019 on the occasion of International Women’s Day. At the time, the Maharashtra government under #UddhavThackeray tried to withdraw the charges against Sudha Bharadwaj but the Central Government intervened and handed the investigation to #NIA.

Even after 2 years, Sudha Bharadwaj had been #deniedbail and is being held without a trial. During the imprisonment, she has also acquired several ailments like- Heart diseases, Arthritis, Hypertension, Diabetes and Depression. Her father passed away during her time in jail. After the #COVID-19 outbreak, it was contended that having a history of pulmonary tuberculosis, Sudha is at a higher risk of contracting the #Coronavirus in prison, and this infection in her present medical condition with two severe comorbidities could be life threatening. But, both the Sessions and the Hon’ble High Court rejected the bail applications.

“What do we know about the Indian born NZ minister?”