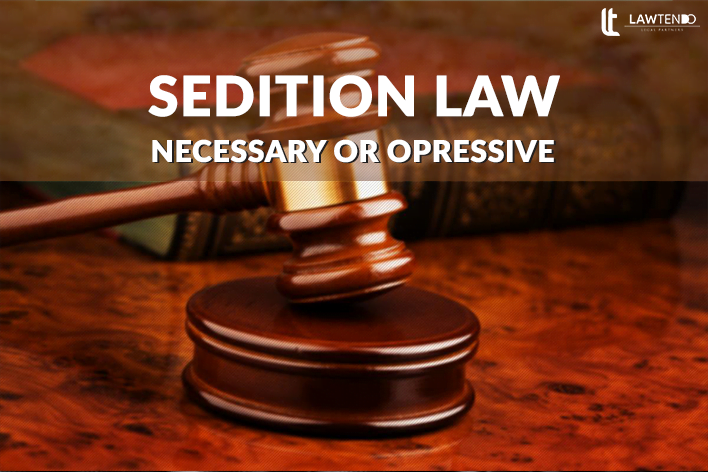 The infamous sedition law or in legal terms Section 121A and 124A of the Indian Penal Code, A law which was brought to India in 1860 and 1870 drafted by Thomas Macaulay and completely installed by Sir James Fitzjames Stephen under the title “Exciting disaffection” with the intention to suppress by incarceration and be done with brave educated voices that rose to educate fellow citizens and question the British Raj about their fundamental and economical rights during Indian independence movement, also “It was one of the many draconian laws enacted to stifle any voices of dissent at that time” as put by a document from AMU. Stephen’s version of 1870 was amended to a large extent through IPC Amendment Act of 1898. The current law stands very much similar to that of 1898, a colonial-era law intended to suppress the voice of freedom, in effect, till date, and we are carrying a British law with the British interpretation given in the year 1942.

A question arises how is a colonial law designed to control freedom of speech against a country struggling for freedom is still functional in the year 2021 with world’s largest Democracy promising freedom of speech and expression to its citizens. To even try to answer this question, considering many angles of argument is necessary as well as the knowledge of the law itself.

Section 124A in the Indian Penal Code.

Explanation 1.— The expression “disaffection” includes disloyalty and all feelings of enmity.

Explanation 2.— Comments expressing disapprobation of the measures of the Government with a view to obtain their alteration by lawful means, without exciting or attempting to excite hatred, contempt or disaffection, do not constitute an offence under this section.

Explanation 3.— Comments expressing disapprobation of the administrative or other action of the Government without exciting or attempting to excite hatred, contempt or disaffection, do not constitute an offence under this section.

Now comparing today’s version to that of 1860 which states: “Whoever, by words, either spoken or written, or by signs, or by visible representation, or otherwise, brings or attempts to bring into hatred or contempt, or excites or attempts to excite disaffection towards the Government shall be punishable with Life Imprisonment”.

Not a lot has changed even though the nation had morphed into Sovereignty. Before the dialogue of different views comes up, a clear awareness of components of an act to be considered “seditious” under IPC is necessary.

Any words which can be either written or spoken or signs which include placards/posters (visible representation). Must bring hatred/contempt/disaffection against the Indian Government. Must result in ‘imminent violence’ or public disorder. Raising of slogans against the government. A speech made by a person must incite violence / public disorder for it to be considered as seditious. Subsequent cases have gone to further interpret it to include “incitement of imminent violence”. • Any written work which incites violence and public disorder.

As per the interpretation of the Court on Section 124-A of the Indian Penal Code, 1860 the following acts have been considered as “seditious”.

Sedition is a non-bailable offence and a cognizable offence (Police officer has the authority to make an arrest without a warrant). Punishment ranges from imprisonment up to three years to a life term, to which fine may be added. A person charged under this law is barred from a government job. They have to live without their passport and must produce themselves in the court at all times as and when required.

Now that the vital information for the debate at hand has been dealt with, looking at key cases since the inception of the law would provide us with the explanation regarding its controversial nature.

1.      The sedition trial of 1897 against Lokmanya Tilak, a lawyer by training, was also politically active in support of independence.  Tilak published reports commemorating the anniversary of Shivaji’s coronation in his daily KESARI, this essay doubled as an attack on the colonial government. Justice Arthur Strachey, who presided over Tilak’s case, widened the understanding of Section 124A. Under his definition, the attempt to excite “feelings of enmity” against government was also a form of sedition. Tilak was found guilty by the jury and sentenced to 18 months of rigorous imprisonment.  Tilak again faced charges against sedition for two KESARI articles, titled “The Country’s Misfortune” (12 May 1908) and “These Remedies Are Not Lasting” (9 June 1908). He was again found guilty under the newly drafted section 124A, and sentenced to six years of imprisonment in Burma.

2.     In 1922, Mahatma Gandhi’s three articles for Young India resulted into his and Shankarlal Banker’s imprisonment under the sedition section. While appearing in court, Gandhi referred to Section 124A as the “prince among the political sections of the Indian Penal Code designed to suppress the liberty of the citizen”

3.     In 1951, the Punjab High Court ruled Section 124A to be unconstitutional (Tara Singh Gopi Chand Vs the State). A similar ruling was passed in 1959 by the Allahabad High Court, which also concluded that it struck at the very root of free speech (Ram Nandan Vs the State)

4.    In the landmark 1962 Kedar Nath Singh case, the Supreme Court upheld the constitutional validity of the sedition law; it attempted to restrict its scope for misuse. The court held that unless accompanied by an incitement or call for violence, criticism of the government cannot be labelled sedition.

The Concept of Free Speech has attained global importance and all have supported it as a basic fundamental right of a human being. In India, such rights are provided under Part III and Article 19 of the Indian Constitution. Courts have been given the power to act as guarantors and protectors of the rights of the citizen. Article 19(1) (a) secures the ‘freedom of speech and expression’ but it has been bound by the limitation which has been given under Article 19(2).

The ambiguity in this law and undefined terms are being misused, to back this statement, the following data puts things into perspective.

The data released by the National Crime Records Bureau for the year between 2014 and 2016 reflect the disutility of the law for the criminal justice system. Under the title ‘offences against the State’ the report shows a total of 179 arrests for sedition. However, no charge sheets were filed by the police in over 70% of the cases, and only two convictions during this time period. This data belie the claim for retaining the Section 124A of IPC.

What is the condition of this law in the land from where this law was imported. Britain abolished sedition as a criminal offence in 1967 and 2009. The UK repealed the law stating it to be a relic of an era where freedom of expression was not considered a right as it is now, and this step would influence other countries which still enforce this law to repeal it and promote free speech.

The Law Commission of India over the years has tried to morph the law.

·        In its 42nd Report (1971), the panel wanted the scope of the section to be expanded to cover the Constitution, the legislature and the judiciary, in addition to the government to be established by law, as institutions against which ‘disaffection’ should not be tolerated.

·        In the recent consultation paper on the sedition, the Law Commission has suggested invoking 124A to only criminalize acts committed with the intention to disrupt public order or to overthrow the Government with violence and illegal means. In August 2018, the Law Commission of India published a consultation paper recommending that it is time to re-think or repeal the Section 124A of the Indian Penal Code that deals with sedition.

The stand of the Supreme Court plays a key role,

The constitutionality of sedition was challenged in the Supreme Court in Kedar Nath Vs State of Bihar (1962).  The court held that “a citizen has a right to say or write whatever he likes about the Government, or its measures, by way of criticism or comment, so long as he does not incite people to violence against the Government established by law or with the intention of creating public disorder”. It had added a vital caveat that “a person could be prosecuted for sedition only if his acts caused incitement to violence or intention or tendency to create public disorder or cause disturbance of public peace”.  In September 2016, the Supreme Court had reiterated these necessary safeguards and held that they should be followed by all authorities.

It is obvious that this law has people divided over it due to multiple controversial cases. Understanding both ‘for and against’ arguments can give insights on necessary changes needed to avoid wrongful conviction.

Arguments in support of Section 124A:

·       Section 124A of the IPC has its utility in combating anti-national, secessionist and terrorist elements

·       It protects the elected government from attempts to overthrow the government with violence and illegal means. The continued existence of the government established by law is an essential condition of the stability of the State

·       Many districts in different states face a Maoist insurgency and rebel groups virtually run a parallel administration. These groups openly advocate the overthrow of the state government by revolution

·       Against this backdrop, the abolition of Section 124A would be ill-advised merely because it has been wrongly invoked in some highly publicized cases

Arguments against Section 124A:

·       Section 124A is a relic of colonial legacy and unsuited in a democracy. It is a constraint on the legitimate exercise of constitutionally guaranteed freedom of speech and expression.

·       Dissent and criticism of the government are essential ingredients of robust public debate in a vibrant democracy. They should not be constructed as sedition. Right to question, criticize and change rulers is very fundamental to the idea of democracy.

·       The British, who introduced sedition to oppress Indians, have themselves abolished the law in their country. There is no reason, why should not India abolish this section.

·       The terms used under Section 124A like ‘disaffection’ are vague and subject to different interpretation to the whims and fancies of the investigating officers.

·       IPC and Unlawful Activities Prevention Act have provisions that penalize “disrupting the public order” or “overthrowing the government with violence and illegal means”. These are sufficient for protecting the national integrity. There is no need for Section 124A.

·       The sedition law is being misused as a tool to persecute political dissent. A wide and concentrated executive discretion is inbuilt into it which permits the blatant abuse.

·       In 1979, India ratified the International Covenant on Civil and Political Rights (ICCPR), which sets forth internationally recognized standards for the protection of freedom of expression. However, misuse of sedition and arbitrary slapping of charges are inconsistent with India’s international commitments.

In conclusion, India is the largest democracy of the world and the right to free speech and expression is an essential ingredient of democracy. The expression or thought that is not in consonance with the policy of the government of the day should not be considered as sedition. The Law Commission has rightly said, “An expression of frustration over the state of affairs cannot be treated as sedition”. If the country is not open to positive criticism, there would be no difference between the pre- and post-Independence eras. Of course, it is essential to protect national integrity. Given the legal opinion and the views of the government in favor of the law, it is unlikely that Section 124A will be scrapped soon. However, the section should not be misused as a tool to curb free speech. The SC caveat, given in Kedar Nath case, on prosecution under the law can check its misuse.

Akhil Gogoi’s success against draconian UAPA: An Acquittal of hope to Sinless