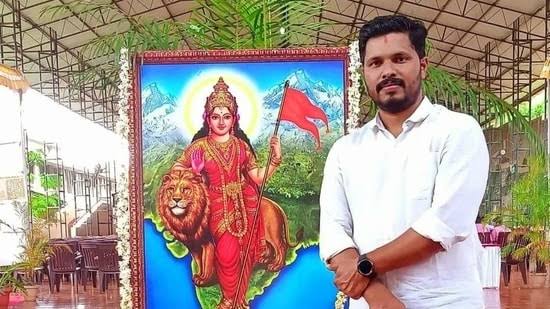 On Tuesday night in Bellare, miscreants on bikes murdered 32-year-old Praveen Nettaru, a member of the Jilla BJP Yuva Morcha committee, by hacking him to death in front of his shop.

Unrest persisted as a large crowd gathered in front of the Bellare police station in the Sullia Taluk as word of Praveen’s murder began spreading. There were reports of stone-throwing and police use of lethal force.

A video of party members jolting and pushing a car in protest at Dakshina Kannada MP Nalinkumar Kateel went popular on social media.

Praveen, a Sangh Parivar activist, made a modest living by running a broiler shop in Bellare.

As Praveen was a committed Sangh Parivar member, authorities believe that his death was triggered by 18 year old Masood’s murder in Bellare on July 20th.

Before his murder, Masood, a daily-wage worker from Kasaragod, Kerala, had spent a month living with his grandfather in Kalanje in Bellare.

The Dakshina Kannada police are now looking into any connections with Masood’s murder after learning that a motorcycle registered in Kerala was reportedly used in the Nettaru murder.

Police are also investigating whether there was any communal angle to Nettaru’s murder.

Sangh Parivar plans to organize a procession with Praveen’s body in tow through Puttur, Darbe and Savanoor. Police security will present to stop any violent incidents.