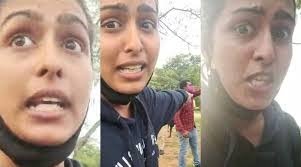 A Congress Leader along with a mob attacked a Kannada actress Samyukta Hegde and her friends for what the lady thought as improper behaviour. The incident happened near Agara Lake area in Bengaluru. According to Samyukta, she visited the lake with her friends on 4th of September, Friday in the evening for practising Hula hoops. While they were practising, a lady came and started shouting and abusing them for what she called as obscene behaviour. Later the lady was identified as a congress leader, Ms Kavitha Reddy. She not only abused the girls but also physically attacked them. Kavitha was accompanied by a mob during this incident and they witnessed it without taking any actions. Rather they were shouting some slogans against the actress.

Moral policy is an activity done by some groups with some code of morality where police or government can charge on any act that is against the Indian Culture. But the act that was done by Ms Reddy was not Moral policing as she attacked women physically. During the incident, the Congress Leader abused them for wearing improper and filthy clothes. Ms Reddy screamed at them saying, “Are you bar dancers? What type of clothes are you wearing? If something happens, don’t cry and come for help from anyone.”

The actress was shocked and panicked by the incident. So she recorded and shared a video in which it can be heard that Reddy and the mob were abusing her. This incident is just shaking the internet and is going viral. Hegde also added not only the mob and the Congress Leader but also ten other men joined them and started threatening her to fix her name in the drug dealing case. The actress and her friends were surrounded by them and they assaulted her which was quite depressing and scary for her. All she tried was to trap the entire incident through a video and urging for help and justice. Once she got back the confidence, she ranked up other local cops and thankfully one of them said that they have done nothing wrong and released them from the chaos, said Samyukta. The actress even mentioned that some of the cops were on the leader’s side and were supporting her, but the other cops came into the spot and asked her and her pals to leave.

Samyukta took Twitter as her weapon and disclosed the identity of Ms Reddy and others. Ms Hegde tagged the post to Bengaluru City Police. Many of her fans and other actresses expressed and showed their support for Samyukta and applauded her for making the video of the entire incident and posting it on social media which is quite powerful to fight against something that should not be encouraged.

She reported that she is quite mentally disturbed because she and her girls were harassed mentally and physically even though they did not do anything wrong. She was in trauma as she was shamed in front of the public rudely. Hegde kept a question for all the netizens, Is this real moral police and the torture that they had to bear without any reason? It has to stop. The unusual and the filthy behaviour of the leaders and the cops who have power should not be used as a weapon to harass people. The power or the authority they have must be used in a proper manner that could help the people rather than creating an unnecessary chaos.