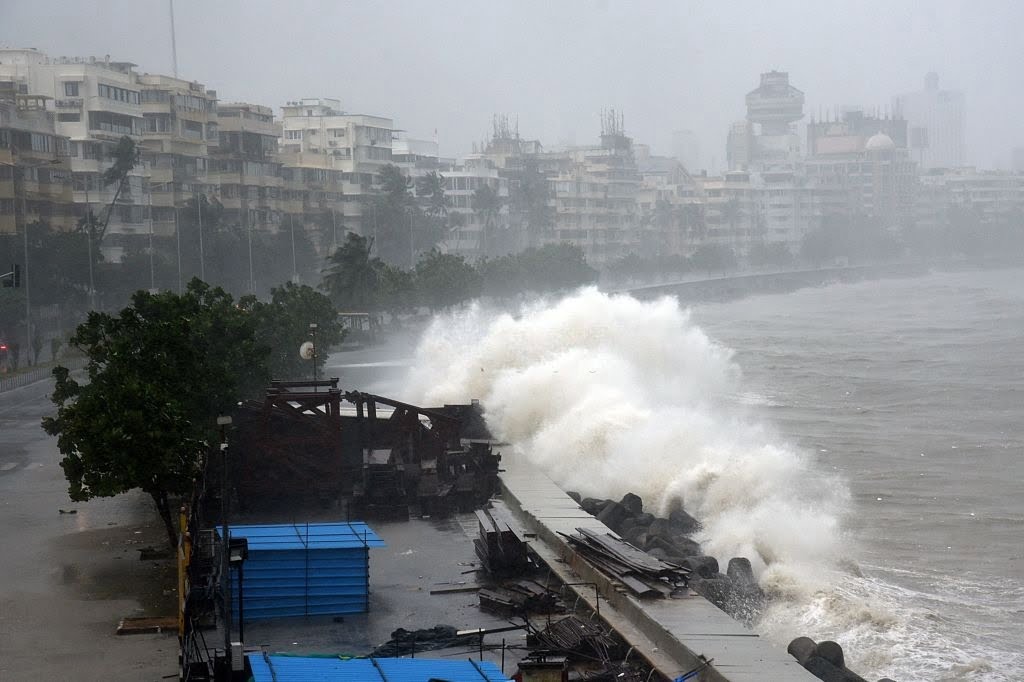 From tackling the disastrous pandemic to now getting attacked by a cyclone named Tauktae, India is going through a lot. The cyclone is moving northwards along India’s West Coast and is now approaching Gujarat.

The Indian Meteorological Department (IMD) said that has escalated into “extremely severe cyclonic Strom” with the speed of 180 to 190 km per hour boosting to 210 km per hour some natural indications have been given by nature from the last few days. Heavy rain and heavy tidal waves swept the coastal belts of Kerala, Karnataka, and Goa on Sunday. these were not cooling went after a heatwave but a get for swing destroying hundreds of houses deracinating electric poles and trees killing at least five people correspondingly a large scale evacuation took place.

According to the IMD, the calamitous cyclone will intensify further and will reach the Gujarat coast on Monday evening. Tauktae has already destructed the regions of Kerala Karnataka Goa Maharashtra Gujarat Lakshadweep, and South Tamil Nadu the evacuation process started extensively which around 1.5 lakh people are being shifted from the low lying coastal areas in Gujarat.

Along with this, 54 teams of the national disaster response force (NDRF) and the state disaster response force have been deployed in the state. Earlier, the wind felt like a zephyr and the source of relief from the hot spell. But soon after that it petrified the people and signalled them to undertake some precautionary measures. Looking at the alarming situation the MET Department warned Maharashtra to brace itself for the cyclone. As heavy rain is predicted at places in North Konkan, Mumbai, Thane, and Palghar. The devastating cyclones have levelled up the water dams across Kerala, threatening the authorities to sound an alert.

Moreover, the State Power Minister Nilesh Cabral said, “Many high tension 33 kV feeders are down due to the falling of trees. Even the 220 kV lines bringing power to Goa from neighboring Maharashtra have been damaged.” As per the official report, several relief camps are functioning to protect people from further casualties. The people living in coastal areas and low-lying areas of Kerala have been shifted to relief camps. Adding to this, the Navy also deployed their teams in coastal villages of Chellanam in Ernakulam district to safeguard people from the giant tidal waves. Accompanying the Navy, 16 transport aircraft and 18 helicopters are kept ready as a preparation for the cyclone by the Indian Air Force (IAF). As a part of precaution, the Trains along the western coast have been cancelled and short terminated, the disruption is expected to continue till May 21.

Amidst the Tauktae Cyclone, one cannot forget the pandemic we are living in, which needs equal care. Taking it into concern, Rajiv Gauna, cabinet head of the National Crisis Management Committee, asked the agencies to ensure the “uninterrupted” functioning of COVID-19 hospitals in the States affected by the cyclone and secure “zero loss” of lives. Along with this, the Chief Minister of Gujarat, Vijay Rupani said, “With the cyclone likely to affect power supply, hospitals treating COVID-19 patients have been asked to ensure power back-up. Arrangements have also been made to ensure uninterrupted generation of medical oxygen in the eight manufacturing units and buffer stock has also been created.”

The Cyclone has increased the pain of patients who require emergency treatment, as travelling in such weather will be tough as well as dangerous. One thing that ministers are requesting from the people is to stay at home taking necessary precautions because two killers are waiting outside, destructive Corona along with the Tauktae Cyclone.